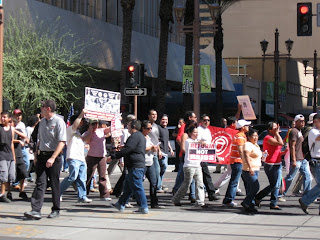 With all of the healthcare & “Obama Care” media hype and the pending legislation in the House being such a hot topic, I decided to break out some of my old blogs describing my trip through the healthcare and welfare system. After finding myself with health issues, I wrote an eight part series that described the process I was forced to navigate and endure. I have been there and done that. I’m hopeful that somebody might find some of the information and experiences helpful in their quest for answers or search for assistance.
January 4, 2008:
After 32 days, my first unemployment check was direct deposited into my checking account. The state waited until the last possible moment before releasing the funds. Lengthy delays seem to be the rule and patience a prerequisite. I suggest that anyone embarking on a mission similar to mine stash cash, food and fuel as it will take some time to enjoy any benefits. Knowing the bureaucracy behind the system is the key to navigating through it.
By not working and paying taxes, I seem to be better off now than when I worked 50 hours a week. Commuting to work used to cost me over $200/month in fuel alone. Presently, I might drive somewhere one day a week and that $75 tank of gas lasts over a month. I received an application with my latest electric bill for a 26-40% discount depending on my KWHR usage. It’s called the APS Energy Support Program. As long as my monthly income stays below $1277/month, I get the discount. Now, I can afford to turn on my electric heater.
I can see how this way of life can be habit forming. While web surfing, I discovered a program through Qwest called “Lifeline“. It allows me to receive an $8.06/month discount on my telephone bill. This was almost too easy. After printing and completing the form, I dropped it in the mail. Owning a printer that copies, scans and FAX’s is saving a lot of time and gasoline.
Nobody at the D.E.S. bothered to mention the existence of these programs. I will have to investigate further to see what else is available to the economically challenged citizen. I suspect the system doesn’t want us to know about many of these programs. I was also offered a box of groceries from the local food bank but turned it down since I really didn’t need it. I stockpiled enough canned and dry goods to last months.
My workers’ compensation, food stamp and AHCCCS claims are all still pending. I did manage to provide proof of citizenship after ordering a copy of my birth certificate from my home state‘s vital statistics department. That cost me $19.00. My biggest challenge will be dealing with Sentry Insurance, my workers’ compensation carrier. I’ve done battle with them before and beat their team of lawyers. They even had the nerve to whine to the judge that rule against them. Using Star Trek terminology, Sentry is the “Borg” of the insurance industry. My former employer had about 100 employees and over a 30 month period sustained approximately 60 OSHA reportable injuries. I’m sure another claim is the last thing they want to see. Serving as a member of the safety committee, I was aware that Cardinal IG employees worked under the “illusion of safety”.
I obtained an SSI application and found it to be so long that it will probably take a month to complete. I won’t file it pending the outcome of my other claims. I’ve begun compiling spread sheets of my monthly budget and have determined that I’m more solvent than the entire U.S. Government. The Feds should bow their heads in shame. During December, I somehow managed to pay off more debt than I created despite not having a job or the ability to print more money.
My next installment will follow once the system’s overburdened pork-filled bureaucracy catches up with all of the forms I filled out.
“The missionaries go forth to Christianize the savages - as if the savages weren't dangerous enough already” --Edward Abbey
Update:
After becoming angry and disgusted, I didn’t wait until my other pending cases were resolved before filing the Social Security Disability paperwork. I completed it and walked it into the Casa Grande office. While there, I became dizzy and nearly collapsed. Inner ear nerve damage and its’ side affects really suck. It appears that being a fall risk caused me to get more courteous and prompt service. The Social Security employees were nothing like the hags over at the DES. The Wackenhut security guard made sure I got to the intake person’s desk.
Utility discounts from A.P.S., S.R.P. and Qwest are still available to qualifying low income households. The forms and qualification guidelines are available online and easily downloaded. It’s as easy as filling out the form and mailing it.
Earlier this summer, I received a letter from the DES indicating that there was a problem with the unemployment benefits I collected in 2008. My former employer made a false statement out of spite or malice. They had the nerve to inform the DES that I voluntarily quit my job. I quickly responded with evidence to the contrary and that was the end of it. This simply proves that employers are often liars and cheats. They are definitely “foe” and not “friend“. Talk about getting stabbed in the back!
In the quarter century I spent in the working world, I never met an honest businessman.


"No man in the wrong can stand up against a fellow that’s in the right and keeps on a-comin’” was the motto of Texas Ranger Bill McDonald (1852-1918). It later became a motto for the Texas Rangers themselves.
Posted by Harry L. Hughes III at 6:28 AM