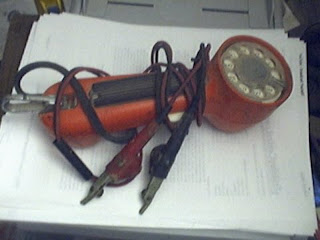 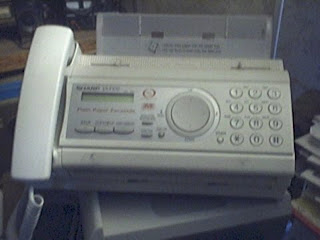 Over a period of several months, my telephone service has been interrupted on multiple occasions due to the poor condition of the lines and less than professional service from Qwest employees.
It seems like I lose my dial tone every time the wind blows or it rains. The wires leading to my home from the telephone pole have been there for decades and show obvious signs of deterioration. In fact, the insulation is falling off the wires. This could very well be why I have excessive line noise and a wimpy 26.4Kb/s dial up internet connection.
Being disabled-hearing impaired and on a fixed income, there are no luxuries like a cell phone, high speed internet or Wi-Fi . My land line is my only form of communication with the outside world aside from my CB radio and amateur radio station. Wireless communication is often times less than reliable due to propagation conditions. Imagine being in an emergency situation and having to dial 911. The nearest first responders are 9 miles away.
More often than not, the technician dispatched to my home is this obese black male. It seems like he’s in a big hurry to leave as soon as he arrives. He barely makes an effort to work. On his first visit last year, he pulled some items out of the gray junction box and tossed them across the road. Not only is he unprofessional, he’s a litterbug as well. I am judging him by the content of his character and not the color of his skin. I think he’s a fat lazy slob. He has returned twice since the first visit and as before only made a half-assed attempt to correct the problems. If he did things right the first time, there would be no need for multiple return visits.
The next time he gets up on that pole, I’m tempted to let my dogs out. Booger and Bonehead will make sure he stays up on that pole until he’s finished.
On his last visit, he informed me that his ladder was too short and that he had to leave. Once again, I was left without a dial tone. On the second day, a different technician arrived and spent several hours here. Whatever he did only worked for a couple of months before failing. At least he put forth more than 15 minutes worth of effort and I give him credit for that.
Most recently, following a rain storm, I was once again without a dial tone. When my telephone service is interrupted, my internet service is also cut off. I live in a rural area and according to a Qwest customer service representative, these areas are not all that important. I pay the same phone bill as urban residents and feel that I should receive the exact same level and quality of service. Qwest clearly states that they exercise “geographical bias”. This is yet another case where people are not treated equally. According to Qwest, urban dwellers are more important than rural residents and receive different (better) treatment.
On Saturday, September 5, 2009, I had to drive to the Farmers Convenience Store at 7:00AM and use the pay phone to call the Qwest repair service. After several minutes of getting jacked around by their automated system, a repair order was finally placed. The recorded message informed me that my problem would be corrected and my service restored by 8:00PM that night. As almost always, I did not believe a word I heard.
After 9 hours, “Where the hell’s the technician?” “Will it be dark when he gets here?” At 4:00PM, I called Qwest and they told me my problem was fixed. No technician ever arrived nor was my phone service working. I guess they never heard of trouble shooting. Why did they not attempt to call my number after deciding it was fixed? This really irritated me.
I happen to have some trouble shooting experience and technical skills. I went outside to my junction box and opened it. Using my somewhat outdated orange telephone company lineman's handset, traced the problem to the same spot where that fat lazy colored guy “afro-engineered” things on his previous visits. The wires were loose. I tightened them and until Qwest replaces the entire junction box with something newer, this problem will continue to occur.
A professional technician would have recognized this problem long ago. I never worked for a telephone company, but recognized this obvious problem. I knew long before that my aging junction box would result in more return visits. I even told them. Qwest has wasted quite a bit of time and fuel driving all the way out here. Why didn’t they fix this right the first time? It certainly wasn’t cheaper. Remember this the next time your telephone company asks for a rate hike.
While typing this blog, my dial tone and internet connection failed three times. I will be calling Qwest again. Updates will follow.
More on Qwest: www.qwest.com
As it turns out, there are many other people that have issues with Qwest: http://www.my3cents.com/search.cgi?criteria=Qwest
One customer writes: "The level of incompetence at this company is staggering."
Top Photo: AT&T rotary dial lineman’s handset
Bottom Photo: The Sharp UX-P100 incorporates a new feature which routes your long-distance phone and fax calls for savings. All this in a sleek design that offers plain paper faxing, copying and telephone functionality. Plain Paper Fax prints or copies on Standard Copier Paper. Full function telephone including 30 speed dials.

“If America ever passes out as a great nation, we ought to put on our tombstone: America died from a delusion she had Moral Leadership.” --Will Rogers
Posted by Harry L. Hughes III at 5:02 PM