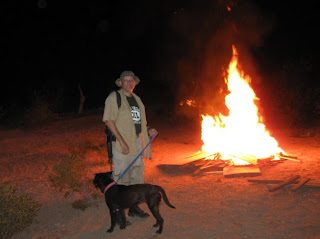 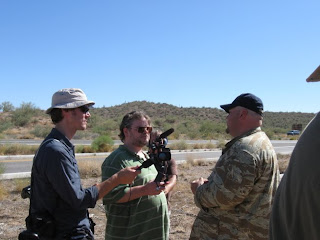 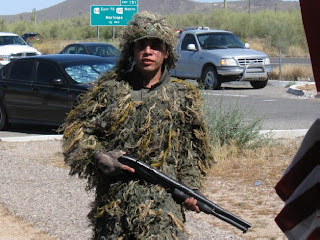 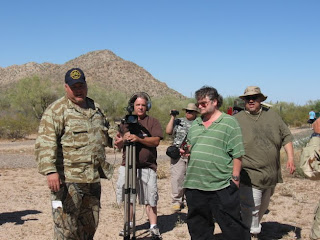 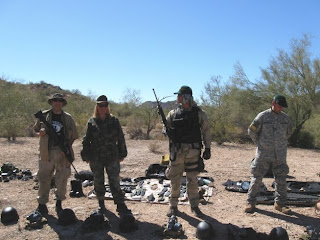 Our illegal alien patrol has been running for over 24 hours. We went straight through the night and into Sunday. We met and talked to quite a few people. Several media outlets arrived to report on our activities.

After getting the media squared away, a base camp and perimeter was established at the abandoned slaughter house off route 8007 & 8045. Numerous foot and vehicle patrols took place throughout the night. Although hot during the day, the night was pleasantly cool and comfortable.

Due to media coverage and the sudden rise in human activity in the area, I don’t think any illegal aliens or drugs will pass through this area until after we leave. Smugglers will either take the night off or pick another route.

Although we were “armed for bear”, I would like to think the primary intention of this show of force was to raise public awareness when it comes to the drug trade and human smuggling. We also need to address the exploitation and destruction of our public lands.

I was pleased to see that Stephen Lemons and Dennis Gilman made the trip out to the press conference at the picnic area along Interstate 8 near mile marker 151. I caught up with them on Vekol Road shortly after dark. They were taking pictures of my favorite “travel caution” sign.

CASA GRANDE, Ariz. -- The federal government is putting up warning signs for the desert recreation area south of Interstate 8 between Casa Grande and Gila Bend.

The signs read that the area is an active drug and human smuggling area and visitors should avoid approaching abandoned cars, backpacks and any camping sights. The signs include the 911 number for any suspicious activity.
http://www.kpho.com/news/23900104/detail.html

How long should we ignore the damage to America, in the form of murders, kidnappings, car jackings, gangs and identity theft. Arizona tax payers spend $2.7 billion annually just to educate, medicate and incarcerate illegal aliens. And what about the 17 to 30 million Americans out of work?

The area where the murders occurred is part of a known drug and human smuggling corridor that stretches from the Mexican border all the way to the Phoenix Metro Area. Hidden cameras in various parts of the desert have caught images of paramilitary-sized squads of men moving throughout the area, carrying automatic weapons. “We do not own this corridor in Western Pinal County,” the Sheriff said, “Drug cartels control this!” Pinal County has only 214 sworn deputies to patrol 5400 square-miles.
http://maricopa360.com/?p=8784#more-8784

We can always expect lots of spin and hype from the journalists on the left when the hottest issue is illegal immigration. Arizona is a very large state. Out here, many people carry firearms and wear camouflage.

The Rio Rico Shootings, J.T. Ready, and Neo-Nazis in the Desert

Estrada said that at this time he has no leads in the case. I mentioned the fact that armed neo-Nazis were patrolling Pinal County's Vekol Valley, and asked him if that was at all worrisome. He spoke generally of the various volunteer groups that seek to patrol the desert themselves.

"That is a concern," answered Estrada. "These people are obviously not trained in this sort of work -- law enforcement. They would be very vulnerable to some of these groups and individuals that really take this very seriously and can be very violent when they have to be. These people could be caught in the crossfire."
http://blogs.phoenixnewtimes.com/bastard/2010/06/rio_rico_shootings_and_neo-naz.php#more

Trying to connect us with a shooting that occurred hours away from home because of a lame blog comment is a bit of a stretch. I really don’t mind because sensationalism keeps the momentum of the border issue going full steam ahead.

PINAL COUNTY, AZ (KOLD) - A group of citizens plans to arm themselves with heavy weaponry and patrol the Vekol Valley area of Pinal County, looking for drug smugglers entering the country. They plan to conduct their patrol operation from 3:00pm Saturday to 3:00pm Sunday.

"We're going to block off the narcoterrorists that come up through this area," said Mesa resident Jason "J.T." Ready, who is organizing the gathering.

Ready says volunteers are coming from all over Arizona, and even out of state, to support the effort.
http://www.kold.com/Global/story.asp?S=12675989

Americans have been conditioned(brainwashed) by the mass media to believe that the only people who can effectively stand up against criminals are the military and law enforcement.

Every time some citizens fights off a burglar or home-invader the police, via the media say, "Well, it turned out good in this case, but people should just give them their money. It's not smart to fight back against criminals."

You do not necessarily need military training to become proficient at weapons and small squad tactics. You don't need to be military or law enforcement to stand up for yourself and defend what is yours. There are many documented instances throughout history where ordinary citizens took up arms to fight for what they believe in, I.E. the Revolutionary War.

"We are a nation of laws. We must have the courage - the fortitude - to enforce, with compassion but without apology, those laws that protect the integrity of our borders and the rights of our lawful citizens." --Senator Russell Pearce, R-AZ
Posted by Harry L. Hughes III at 8:36 AM


It was not part of their blood
It came to them very late
With long arrears to make good,
When the SAXONS began to hate,