We had an interesting time at the "Occupy Phoenix" protest in downtown Phoenix. 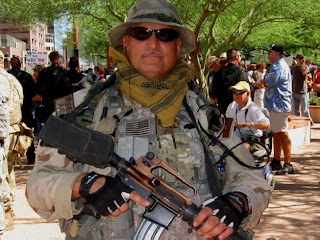 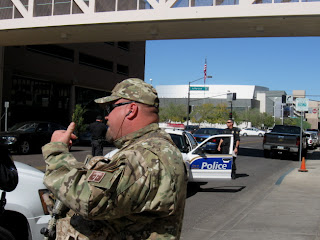 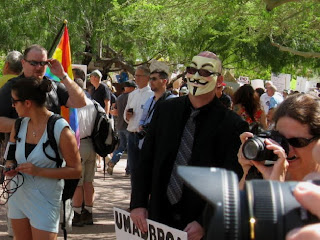 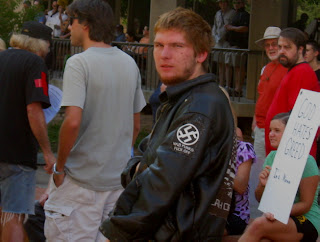 Attending this event "geared up" with the US Border Guard wasn't my first plan or proposed mode of operation. When J.T. Ready suggested that we show up armed, I couldn't resist. We've done things like this before and we've been very successful. Showing up armed leaves an extremely strong message. It was impossible to ignore us. Upon our arrival, we immediately got the crowd's attention.

Almost everybody that stopped by were very friendly and polite. Unfortunately, a few provocateurs appeared and immediately, without the benefit of fact, labeled all of us "white supremacists". One person even got in the face of a reporter and all but cried foul.

From my vantage point, I noticed that most of the negative comments fell on deaf ears. Almost everybody I spoke with had something in common with me. I enjoyed speaking with a wide variety of people and even posed for a few pictures. The event was billed as being non-violent and it was. Despite the futile actions of a few provocateurs, there were no confrontations, excessive profanities or violence.

Cooler heads prevailed and the anarchists failed to give this event a black eye by inciting a riot. They also failed to cause division among us and the majority of the attendees.

They're pissed off at American greed and social injustice. They're relatively leaderless but well connected through social media. And they're gonna Occupy Phoenix on October 15.

The "Occupy Wall Street" movement that led to 700 or so arrests in New York City over the weekend is catching like wildfire, with more left-leaning protests planned for major cities in the upcoming days and weeks. Crowds began camping outside Los Angeles City Hall on Saturday.
http://blogs.phoenixnewtimes.com/valleyfever/2011/10/occupy_phoenix_planned_for_oct.php

PHOENIX -- The Occupy Wall Street protest is heading to the Valley.

Phoenix Police Sgt. Steve Martos said the department is prepared for the protest and whatever may come.
http://ktar.com/6/1460951/PD-ready-for-Occupy-Phoenix

During our time at the protest, open borders advocate and radio host, Carlos Galindo walked by and I said, “Hello”. He kept walking, but snapped my photo. As you may recall, Galindo threatened me on the air some months ago. I happen to have that recording posted on my Youtube channel.

Statement Issued by US Border Guard

The U.S. Border Guard deployed an urban combat trained security squad to the Occupy Phoenix rally today as armed peace keepers and legal observers. Border Rangers who patrol the border took a non-political stance to defend peaceful assembly and free speech of all citizens by exercising our right to keep and bear arms. Phoenix Police units were on scene also keeping the peace. Our founding fathers and founding mothers knew full well that the 2nd Amendment is what protects all our other amendments from tyranny. The U.S.B.G. protected the rights of all parties involved. --J.T. Ready, USBG Patrol Leader

The local white-hating anarchist and Communist collective went to great lengths to paint a picture that wasn't there. The US Border Guard is not a front group for The National Socialist Movement. I was the only NSM member in attendance and they somehow managed to omit me from the “group” photo. They also failed to identify me. So much for communicating the truth. Their blog is nothing more than a work of fiction. I was the only National Socialist Movement member present at the entire event.

Today at the first mass general assembly of the #occupyphoenix movement, neo-Nazi members of the National Socialist Movement showed up, armed and in their "Arizona Border Guard" militia fatigues, to counter protest. Sporting assault rifles, they posed flanked by dozens of cops. Recognizing key NSM organizers in their midst, several people confronted them and set about informing the generally ignorant crowd that before them stood actual fascists, armed to the teeth.
http://firesneverextinguished.blogspot.com/2011/10/national-socialist-movement-scum-show.html

We were not there to counter protest. That is a lie. These people couldn't get it more wrong if they tried. They should have watched the video on Channel 12 News and got it straight from the source. And they call us ignorant?

More than a thousand people packed Cesar Chavez Plaza in downtown Phoenix on Saturday to protest what they view as abuses by banks and other major corporations.
The protest was an offshoot of the Occupy Wall Street movement that began last month in New York City. It spread to cities around the world Saturday http://www.azcentral.com/community/phoenix/articles/2011/10/15/20111015phoenix-occupy-phoenix-protest1015.htm

"To compel a man to subsidize with his taxes the propagation of ideas which he disbelieves and abhors is sinful and tyrannical." --Thomas Jefferson
Posted by Harry L. Hughes III at 9:14 PM