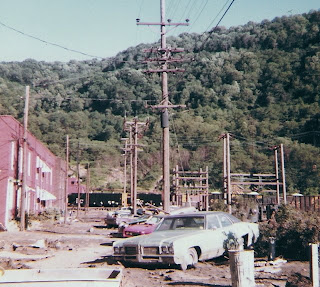 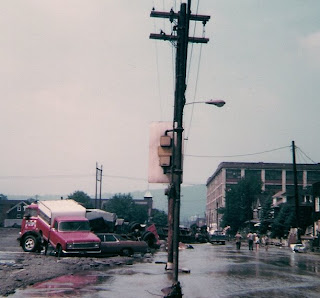 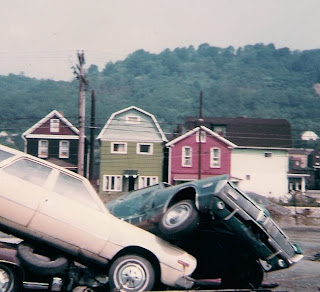 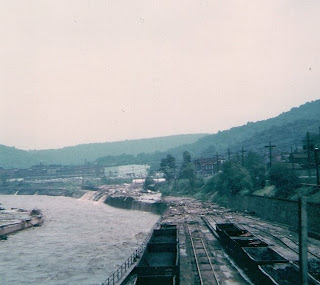 On the night of July 19, 1977, it rained. A violent thunderstorm remained stationary and deposited nearly a foot of rain. I took these pictures from the Conemaugh/Franklin Bridge and in Woodvale at Bethlehem Steel's Bar, Rod & Wire Division employee parking lot as soon as the water receded. I used a cheap 126 film camera manufactured during the late 1960’s. Thanks to modern technology, I’ve been able to preserve this moment in history.
Johnstown, PA has a history of being wiped out by floodwaters. In fact, the city is nicknamed, “The Flood City”.
Once In Ten Thousand Years
http://www.johnstownpa.com/History/hist21.html

The dams that surround Johnstown, stretching throughout the Conemaugh Valley, were unsuspecting accomplices in the Great Flood of 1977. They were duped by the instigator - the rain.
When they failed, six dams poured more than 128 million gallons of water into the Conemaugh Valley Twenty million gallons were unleashed on Johnstown when the South Fork Dam burst in 1889.
A phenomenal amount of rainfall - 11.82 inches In 10 hours was too much for both the dams and the sewers in the Conemaugh Valley The rainfall and the dam failures created the Great Flood of 1977.
The National Weather Service said a once-in-a-1,000 year flood in the valley could have resulted from 7.32 inches of rainfall in a 10 hour period. But an 11.82 Inch rainfall would be a once-in -a- 5,000 to 10,000 year occurrence.
Johnstown Flood 1977 TV Report:
This is a report from WTAJ-TV, Altoona reporter Jon McClintock - the first outsider to reach Johnstown, PA in the 1977 flood that killed 78 people
http://www.youtube.com/watch?v=K5yzdDtlmLw

Unlike the Hurricane Katrina disaster, there were no crime waves, violence or serious looting incidents. People worked together and made the most out of a bad situation. Unlike New Orleans, a “shoot to kill” order was issued for looters. This and a large heavily armed population of White People prevented trouble in most instances. The 1977 Johnstown Flood was the first in a series of events which eventually lead to my relocation to Arizona. Economic decline, unemployment, mill closings along with the importation of foreign steel products all lead to my migration.
Posted by Harry L. Hughes III at 3:14 PM 5 comments: