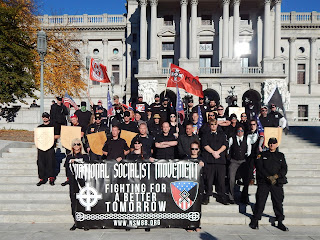 On Saturday, November 5, 2016, despite many threats of violence, from the far left, the National Socialist Movement, along with comrades from the Traditionalist Workers Party, Texas Rebel Knights and others, flying under the unifying banner of the Nationalist Front (formerly Aryan Nationalist Alliance), conducted a rally on the steps of the State Capitol in Harrisburg, Pennsylvania.

Although this rally took place only four days ahead of the controversial and highly publicized US presidential election, it was our annual national event that normally takes place on or around the first week of November. Whether it be an election or Kristallnacht , the media desperately tries to spin the timing of our events. Video 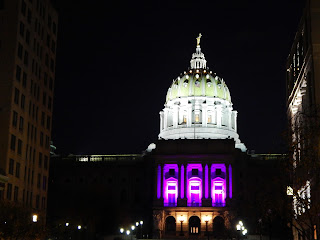 Initially, our rally was not going to have a police presence, but the antifascists, self proclaimed anarchists and Communists assembled, by the hundreds, on the street adjacent to the Capitol steps. Upon our arrival, there were approximately 100 police officers, many clad in armor and tactical gear, from various law enforcement agencies, including the Pennsylvania State Police. The main stream media labeled these miscreants as "peaceful protesters," but they hurled eggs and bottles at the police, while setting off fireworks in close proximity to horse mounted officers.

Typically, the police are present for the protection of the counter demonstrators. True to form, it was the degenerates, on the other side of the barricades, that became unruly. From what we sat, from the Capitol steps, two people were taken into custody and hauled off to jail. It's not uncommon to watch these protesters fight among themselves.

With the presidential election only days away, reporters from around the country and World were present. Commander Jeff Schoep highlighted the political corruption that infests, both, the Republican and Democratic parties. This rally also marked the official re-branding of the rapidly growing Aryan Nationalist Alliance, into the "Nationalist Front." The purpose of this transition is to make our organization(s) more inclusive. 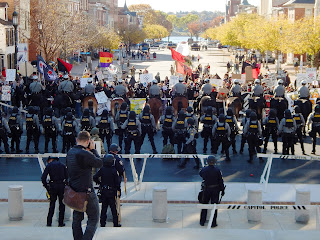 As the Globalist Movement draws to a close, the rise of nationalism in the United States and across Europe, brings us to a time, where unification and cooperation among our respective groups becomes one of our highest priorities. The days of a "silenced" White America are over, as people are removing their blinders of political correctness. Video

Although the controlled media attempted to brand the NSM/NF with the "hate group" moniker, comments on numerous social media sites were far more critical of the counter protesters, who were supposedly opposed to hatred and bigotry. After all, they were the ones actually spewing hateful rhetoric, while holding signs advocating violence and death. The public is finally seeing through the smoke screen and lies of the corrupt and biased propagandists, posing as journalists.

Once the speakers were finished and our rally drew to a close, we took our obligatory group photo on the Capitol steps, broke down our PA gear and formed up a column. Some of the more violent and radicalized protesters attempted to flank our ranks, as we made the quarter mile march to our staging area, at a nearby parking garage. Without incident, we departed downtown Harrisburg and returned to our hotel. That evening, we enjoyed conversation, camaraderie and food. NSM 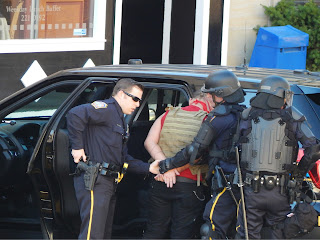 On top of a successful rally and cooperative weather, I enjoyed my week in Pennsylvania. During my stay, I visited the Flight 93 Memorial (near Shanksville), the World famous Horseshoe Curve, the Johnstown Flood  National Memorial and the Allegheny Portage Railroad National Historic Site. No trip to western Pennsylvania would be complete, without visiting a few roadside diners and enjoying some good eats.


The Neo- Nazi group was out there to ask people to open their minds to its ideals, “We have an alternate. We want to encourage third party activity in this country and it should be more than a two party monopoly, which is what I’m going to call it.” said Hughes. CBS


Jeff Schoep, the commander of the National Socialist Movement, said, "We want to stem the tide of illegal immigration. We want to get people politically active and politically astute. Get them out there. And obviously grow our organization." Fox43 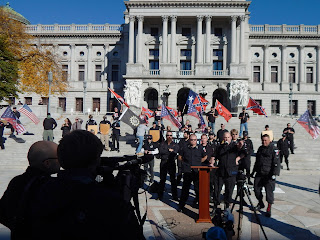 My flight back to Arizona was on Election Day and this was intentionally planned. The last thing I wanted was to be somewhere, within ear shot of anything political. I hear enough of that, all week. From Pittsburgh to Houston and off to Phoenix, my flights were relaxing and peaceful. Luckily, there were no disruptive passengers requiring forced removal, this time.

After claiming my bags and negotiating a two hour traffic jam through Phoenix, I arrived home, at about the same time the polls were closing. At this time, most would be ready to call it a night, but not me. The NSM Media Radio Network went live, covering the election, as the ballots were counted. I was part of the discussion, up until well past midnight, when we decided to call the election. The rest is history.

From William Penn... "Governments, like clocks, go from the motions men give them, and as governments are made and moved by men, so by them are they ruined too. Wherefore governments rather depend upon men than men upon governments." (From preface to the Frame of Government of Pennsylvania, 1682)

They're not laughing, anymore.
Posted by Harry L. Hughes III at 3:46 PM No comments: