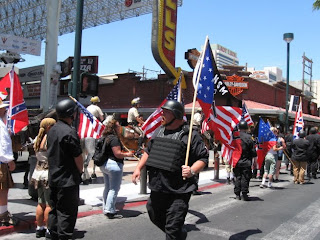 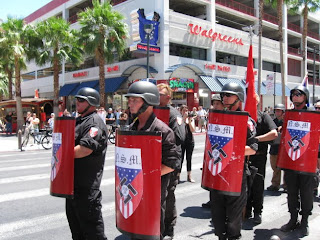 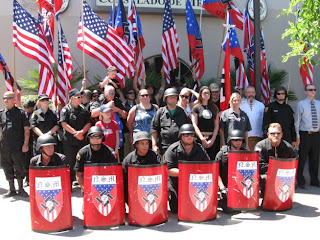 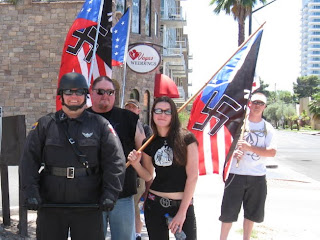 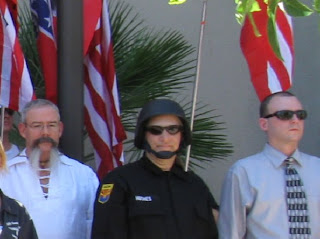 I spent the weekend in Las Vegas, Nevada in order to participate in a marching protest at the Consulado De Mexico. On June 5th, 2010, the NSM Nevada Unit sponsored a protest against illegal immigration, corrupt politicians, open border advocates, and Obama’s proposed amnesty and immigration reform. We marched past the Mexican Consulate and up to the Freemont Street Experience. The rally began at 1:00PM and ended shortly after 2:00PM.

Most people simply stared in shock and took pictures. One sloppy looking drunk became irritated at me and a mounted police officer had to block him with his horse.

National Socialist Movement Marches Against Illegal Immigration In Las Vegas, Nevada; 45 Patriots Show Up, Antifa Too Scared To Show Up

The Las Vegas Review-Journal reports that 45 members of the National Socialist Movement showed up in Las Vegas, Nevada on June 5th, 2010 to rally against illegal immigration. The group held shields and flags bearing swastikas, and chanted "deport the illegal aliens," "impeach Obama" and "immigrants go home." They ended their march in front of the Mexican Consulate on 330 S. Fourth St. Police said the group's march ended without incident. There were no counterprotesters; undoubtedly, antifa are now deterred by the fact that the NSM has proven they will fight back against antifa.
http://whitereference.blogspot.com/2010/06/national-socialist-movement-marches.html

On June 5th 2010 the NSM began what was to be a protest of the Mexican Consulate in Las Vegas. We assembled 50 members and supporters who gathered as part of our Reclaim the Southwest Campaign, which is our ongoing offensive against the forces of tyranny who seek to destroy America by granting illegal immigrants citizenship, promoting amnesty, and other wretched plans that have driven our Nation to the brink of destruction with the loss of American jobs and a weakened economy.

What began as a protest quickly turned into a march in the scorching Nevada heat (which was well over 100 degrees on June 5th). Starting at the Consulate we formed up the ranks in columns and went directly to Freemont street with the intention of leaving the sidewalks and entering the World renowned Freemont street public walkway. Police on horse's blocked off our route and stated that they would not interfere with our March, however they claimed that the Freemont street entrance was private property and that we could not advance through it. Alternatively, the march went on around Freemont street and on to the even busier Las Vegas strip.

There was virtually no opposition to the NSM March through downtown Las Vegas, many citizens and tourists were taking pictures and watched the formation, and a few suspected illegal aliens yelled out profanities, however there was absolutely no organized anarchists, communists, homosexuals, or other degenerates in opposition to the NSM in Las Vegas. The event was a success, and proof once again that the NSM is willing to take to the streets any time and anywhere in defense of American values and restoring our Nation.

The Rally ended as it began at the Mexican Consulate near downtown. The action did not end with the rally, later that night several NSM members went back to the Las Vegas strip to continue making friends and spreading the news of our efforts. What ensued could be titled the “Brawl at the Bellagio!“ A small group of NSM members legally defended themselves and put the antis on the run again. The antis learned the hard way, if you attack the NSM you will end up getting beat up! A second after action report and video's from the brawl will be released soon.

On behalf of the Party and myself I would like to thank all the members, and supporters that participated in the Las Vegas event. It was an honor for me to attend the march with you all. Hail Victory!

Below is our first video from the event, more video's, pictures, etc. are forthcoming.
http://www.youtube.com/watch?v=xwQQIjVlVQY

About 45 members of the National Socialist Movement, a white supremacist group, marched downtown Saturday afternoon in an effort to speak out against granting amnesty for illegal immigrants in the country.

Immigrant: 1.) a person who migrates to another country, usually for permanent residence. 2.) an organism found in a new habitat. From: http://dictionary.reference.com/browse/immigrant
Posted by Harry L. Hughes III at 7:08 PM No comments: