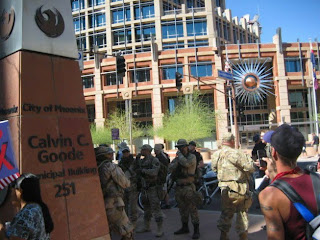 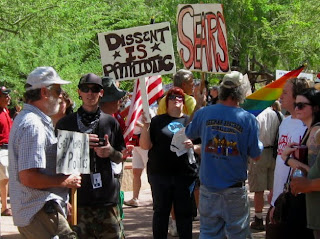 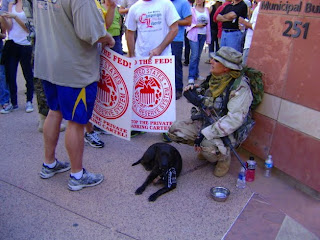 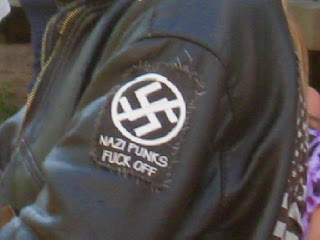 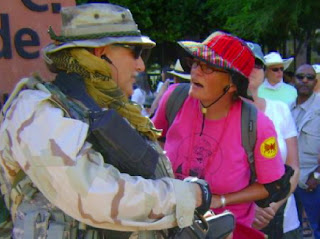 I've been following the "Occupy" movement and even attended the "Occupy Phoenix" event yesterday (Saturday, October 15, 2011) to have a look for myself. This event appeared to have been organized by the local anarchists and Communists. Many of them were present at the protest and actually tried to cause division among the ranks by calling us "White Supremacists". Name calling is frequently a futile last resort attempt to discredit people without the benefit of a valid argument.

This event wasn't all that different from the Tea Party events I've attended over the last couple of years. Most of the attendees were against, Wall Street, bankers, big government and corrupt politicians. Many of them had signs and all of them had a message, although not the same message. It would appear that the Left and the Right have more than a few things in common. I wonder if they'll notice?

Notably different from the Tea Party, the protesters were in favor of redistributing wealth by taking from the rich and giving to the poor. They were promoting Communism. Their ideology came straight from the writings of Marx and Lenin.

WALL STREET PROTESTS...NOT ANTI WALL-STREET AT ALL, BUT INSTEAD RACIALLY MOTIVATED AGAINST WHITES

THEY WERE MURDERING YOU WITH AND INSIDE OF THEIR CORPORATIONS FOR OVER 66 YEARS !!! THEY HAVE CLOSED DOWN ALMOST EVERY SMALL COMPANY IN UNITES STATES OF AMERICA AND NOW, THEY WANT YOU TO GO OUT THERE AND PROTEST FOR THEM AGAINST WALL STREET(corporations = Wall-street)!!!

ALL THEY WERE DOING IS CRIME CONTEMPLATING AGAINST US INSIDE OF THEIR BACK OFFICE CUBICLES (on job torture/bullying/mobbing and forceful unemployment to progress humanity as Obama exclaimed over and over) PER EEOC AND NOW, THEY WANT YOU TO RAISE COMMUNIST FLAG UNDER AMERICAN SKY !!! ONE RACE; RAT RACE (Wall street protesters are Obama's army which spread from London per Zionist Washington DC and communist Moscow) !!! http://online.wsj.com/community/groups/obamanomics--economy-1435/topics/wall-street-protestsnot-anti-wall-street

Video Exposing How ‘Occupy Wall Street’ Was Organized From Day One by SEIU/ACORN Front – The Working Family Party, and How They All Tie to the Obama Administration, DNC, Democratic Socialists of America, Tides and George Soros

This is all part of the PLAN. They need civil war , class warfare, racial strife.
Every time you think they cant get any lower , they do….the gravy train is coming off the tracks and they know it… You are seeing the last dieing gasps of socialism…. VOTE
http://www.theblaze.com/stories/video-exposing-occupy-wall-street-was-organized-from-day-one-by-seiu-acorn-front-the-working-family-party-and-how-they-all-tie-to-the-obama-administration-dnc-democratic-socialists-of-america/

In fact, if you really want a shock, do a search for "Communists" + "Occupy". This might be a real “eye opener”.

How does a group like Occupy Wall Street get anything done?

The angry protestors who call themselves the “99 percent” have started a movement, but to many it’s unclear what their demands are except to shine a spotlight on the “greedy and corrupt” rich -- especially bankers -- and politicians who have lost touch with the people. Critics of the largely unstructured demonstration point to examples like Detroit's take on the matter: protesters had planned for their city's occupation and march to begin today, but as of late last night, no permit had been filed.

Demand nine: Open borders migration. anyone can travel anywhere to work and live.

Demand eleven: Immediate across the board debt forgiveness for all. Debt forgiveness of sovereign debt, commercial loans, home mortgages, home equity loans, credit card debt, student loans and personal loans now! All debt must be stricken from the “Books.” World Bank Loans to all Nations, Bank to Bank Debt and all Bonds and Margin Call Debt in the stock market including all Derivatives or Credit Default Swaps, all 65 trillion dollars of them must also be stricken from the “Books.” http://politicons.net/crazy-communist-occupy-wall-street-protesters-post-list-of-13-demands/

In ancient Rome, the Jews used many tactics to keep the people's attention focused on things other than the most important issues. One tactic they used we today call "bread and circuses." That is where the Jews offered up 100 days of free coliseum battles and free food. It kept people distracted while the political world of the Romans came to a grinding halt and crumbled into nothingness. This might sound similar to football season that happens to coincide with the presidential election season. Keep the people distracted and they will accept any travesty.

Nothing good will come from this movement. It is not a sign of better days to come. It is just the sign of power shifting from one group of Jews to another. Capitalism, Communism, Socialism, and Democracy... It's all one big Jewish rat-maze experiment and we're the lab-rats.

As National Socialists, we represent a 'third way' which is neither of Left nor Right, neither Liberal or Conservative, neither Democrat nor Republican, neither Communist nor Capitalist.

"They ought to stop lying. One day our patience will come to an end and then we will grab these insolent Jews by their throats and shut their lying mouths shut!" - Dr.Joseph Goebbels
Posted by Harry L. Hughes III at 11:33 AM No comments: