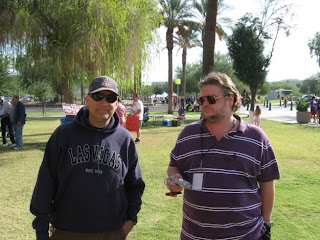 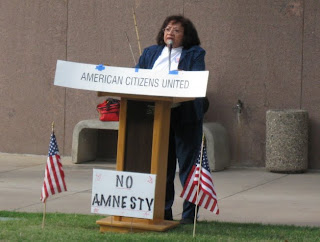 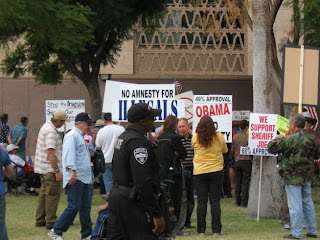 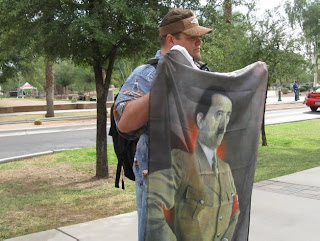 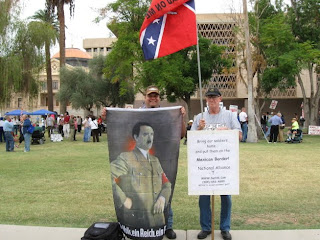 After last week’s NSM march and rally, I was still in “protest mode” and decided to attend a anti-illegal immigration tea party this morning. Once again, it was at the State Capitol in Phoenix. A group known as American Citizens United sponsored this event. The founder and chairman of ACU is Anna Gaines, an66gns@gmail.com. Initially, she was nice to me as we had met before at the Guadalupe Town Hall meeting last spring, but she drastically changed her attitude after her opening speech. Apparently, my political connections and associations made me unwelcome at this event. The dreaded “Neo-Nazi” term got used. (the other “n-word“)
My association with none other than J.T. Ready earned me a spot on the ACU’s black list. So much for unity. We are on the same page when it comes to illegal immigration. At the same time, New Times Reporter and blogger, Steve Lemons was also getting the boot. It’s ironic that the "left" and the "right" were not welcome at this tea party. As Steve Lemons and I were about to be escorted off the Capitol Lawn by the police, J.T. Ready appeared and was given the bad news. J.T. and I briefly retreated across the street to his car, only to return a few minutes later with “plan B“.
There were plenty of other “racially conscious” White Americans present at this event that went un-noticed.
We wanted to play nice in their "nativist" sandbox, but they wouldn’t let us. We returned with a Confederate flag and an Adolph Hitler banner. We stayed on the sidewalk in front of the tea party and with minimal effort, were able to distract the TV cameras. The cameras were no longer on the tea party. They were on us! With only a couple of guys, we managed to hijack their tea party.
.
A visibly agitated wannabe "biker type" approached J.T. and grabbed his banner and assaulted him. J.T. responded by shoving him. He landed on the Capitol Lawn several feet away. The police officer that was standing only a few feet away didn’t have a problem with J.T.’s actions.
While the assault was taking place, Dennis Gilman, a Phoenix New Times videographer/pro-illegal alien activist was discovering that he was not welcome at the event as well. He ended up retreating to the sidewalk after a mob moved in on him. We gave him some good video and a few pointers on where to point the camera.
Initially, I was content to just stand there and listen to the speakers. The events that transpired ended up being a lot more fun and exiting. I would really like to thank Anna Gaines for kicking me, J.T. Ready and the New Times staff out of her little tea party. Let’s do it again sometime. I hope everybody remembers this incident the next time they exclude somebody from their event. The only thing that would have made this event better, is if some of those masked anarchists would have arrived to throw things at Anna Gaines.
American Citizens United, You are cordially invited to:
.
The Phoenix Arizona Tea Party Against Amnesty
Place: Arizona State Capitol Grounds 1700 W. Washington St. November 14, 2009 10:00 AM to 1:00 PM
.
Speakers: The Hon. Arizona Senator, Russell Pearce (Mesa) Chris Simcox, candidate to the US Senate Hugh Kealer, candidate for the Arizona Governors Office Mark Spencer, President of PLEA Phoenix Police Officers AssociationRobert Zuluaga, President of Coalition for a Conservative Majority (CCM)

Tell this to the guy that assaulted J.T. Ready:
Please, no hate-filled signs. Let's keep it factual and lawful. We are different than they are. We don't behave uncivilized as they do in their protests and marches. We have to set an example of "true American behavior" for our children and grandchildren. They are the ones who spew hatred toward patriots defending our country.
http://americancitizensunited.cloverpad.org/

200 at Phoenix tea party rally against illegal immigration
Many carried signs. Baron displayed her message on her T-shirt: "It's not about hate for any people or race. It's about love for our country and pride." The 53-year-old retired massage therapist said she doesn't want to see the country given over to "tax breakers."
Even though her father's parents were Hispanic, she doesn't consider herself a Mexican-American. She dislikes the term. "I'm an American."
http://www.azcentral.com/news/articles/2009/11/14/20091114teaparty.html
I guess you can now call me a “tea party crasher”. I should create a field guide to tea party crashing or some similar publication.
.
Update: Channel 3 News video shows who the real haters were at the tea party:
http://www.azfamily.com/news/local/Immigration-rally-gets-heated-when-neo-Nazi-group-shows-up-70120332.html
.
From the Phoenix New Times:
.
Hillbilly Hootenanny: Nativist Jabronis Occupy the Arizona State Capitol for Yet Another Hatefest
http://blogs.phoenixnewtimes.com/bastard/2009/11/hillbilly_hootenanny_nativist.php#more
“Illegal is not a race. It’s a crime.” --Anna Gaines, from her opening speech
Posted by Harry L. Hughes III at 2:00 PM 1 comment: