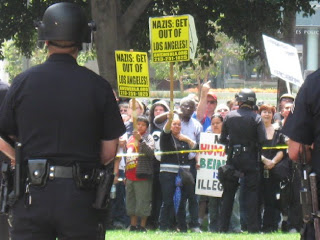 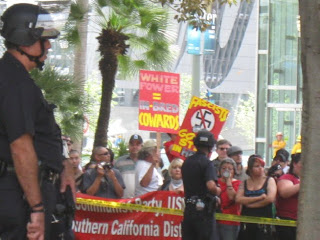 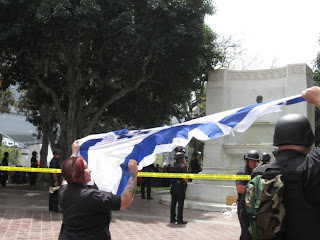 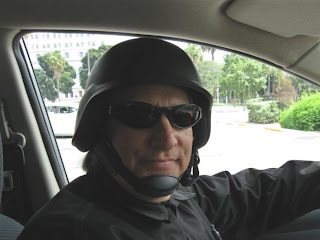 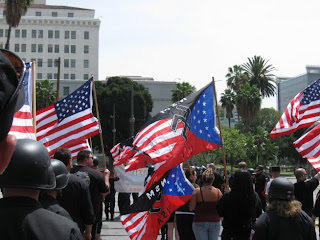 On Saturday, April 17, 2010, NSM units from around the country and from around the world gathered in Los Angeles, California for the “Reclaim The Southwest Rally” at city hall. Approximately 500 rag bag looking counter protesters gathered in opposition. As usual, the counter-protesters were anything but civilized and well bahaved.

On Saturday members of the National Socialist Movement, a white supremacist group, rallied on the south lawn of Los Angeles City Hall while preaching a pro-white, racist message as part of their “Reclaim the Southwest!” agenda and a warm-up for their dinner convention which was held in a secret location.
http://lafiga.firedoglake.com/2010/04/18/white-supremacist-rally-gets-a-little-nasty/

The rally took place on the South Lawn of L. A. City Hall. Police created a “buffer” zone that was approximately 100 feet wide. In that zone were well armed officers. Some had shotguns and others had tear gas. The entire city was placed on a “tactical alert” in the event things got out of hand.

Neo-Nazis, Counter-Protestors Face Off In Downtown

LOS ANGELES (CBS)A handful of anti-neo-Nazi protesters were arrested for throwing things after a rally held by white supremacists in downtown Los Angeles.

Police officers stood between the white supremacists and counter-demonstrators on the south lawn of Los Angeles' City Hall, where about 50 members of the National Socialist Movement waved American, Confederate and Nazi flags and swastika banners for about an hour.

Police citywide were put on tactical alert in case wide-scale trouble broke out. The neo-Nazi group obtained a city parade permit for their rally.
http://cbs2.com/local/protest.nazi.rally.2.1639389.html

As we entered the lawn, we could hear the chants of the counter demonstrators. As always, they resorted to screams and profanities to express themselves. The route was lined with an army of reporters and photographers.

During the rally, one handcuffed counter-protester was seated on a concrete planter in front of the Police Administration Building, arrested by an undercover officer who caught her throwing eggs at the neo-Nazis.

A 32-year-old Cudahy man and a 20-year-old Los Angeles man, both Hispanic, were charged with felony assault with a deadly weapon for allegedly throwing rocks.

A white 17-year-old Los Angeles male, 18-year-old black female from Los Angeles and 16-year-old female Hispanic were arrested on misdemeanors for allegedly throwing eggs.
Those arrested did not identify themselves as being affiliated with any organized group.
Villanueva said all those arrested were counter-protestors.
http://www.scpr.org/news/2010/04/18/5-arrests-1-injury-reported-la-neo-nazi-rally-and-/

Although several speakers gave remarkably well versed and intelligent speeches, the Communists and scum were too closed minded to shut up and listen for a few minutes. They continued to chant and utter profanities.

I was particularly impressed with Chairman Herrington’s speech describing in more scientific terms how the problem of illegal immigration is in fact biological warfare against White People.

As is always the case, look who acted uncivilized. Who were the haters? Not the NSM. Even people described as “pacifists” by the local media resorted to senseless violence and vandalism.
$200 Billion dollars a year in suppressed American wages are caused by illegal aliens. They will work for less pay, thus driving down wages for citizens.
Posted by Harry L. Hughes III at 12:33 PM 1 comment: