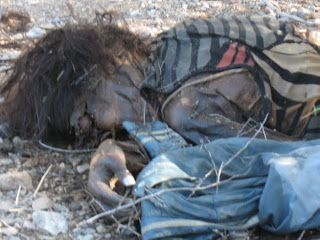 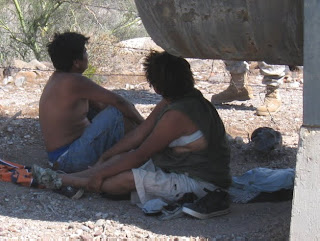 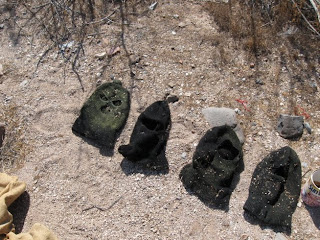 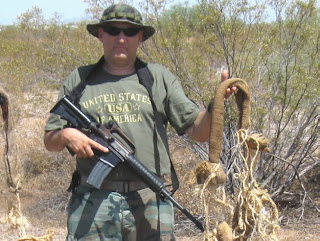 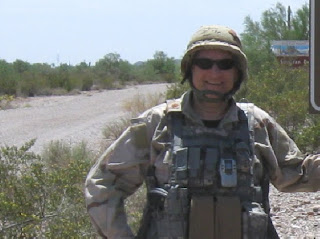 In case you're too damn stupid to know what's going on in your county, I thought I'd send you a few pictures. My photos do most of my talking. Drug and human smuggling are serious problems in Pinal County. Sheriff Babeu was absolutely right in calling it an emergency.

More deputies are needed. In the mean time, heavily armed citizen patrols, like the ones I'm involved with, will continue and intensify. Despite being demonized as vigilantes and racists, we have made a difference. Of course, the media will be tagging along with us.

"Rios didn't immediately return calls from CBS 5 News, but he was tracked down at a county function at the Windmill Winery to ask why he didn't want to hear the sheriff's pitch." A winery!? WTF!? This sounds like drinking on the job to me. I suggest you pull you head out of that bottle and wake up.

Protect Pinal County and its' citizens!

Today's status: Anyone that puts the livelihood of drug and human smugglers over the safety and well being of tax paying citizens is a traitor in my book. Pinal County Board of Supervisors Chairman Pete Rios might end up eating crow.

PINAL COUNTY, Ariz. -- An Arizona sheriff said illegal immigrants have been living in caves and operating as drug spotters.

First of all, I don't drink wine, I drink Whiskey. Secondly, it was 6:00 PM and I went there to the Windmill to interview with Channel 5 when I got a call that they were there waiting for me. And if you are not intelligent enough to know you can't believe everything you hear and see on TV, then it's your problem!!!!!

On the subject at hand, thank you for your email on the Sheriff's proposed anti-human smuggling and anti-drug unit. I asked that the agenda item be rescheduled for anther date to provide our budget staff and myself additional time to attempt to identify the requested $1.5 million dollars over the next two years that the Sheriff is requesting. We only recently adopted the FY 2010-2011 county budget and the Sheriff had not included a funding request for such a unit.

As we all know the recession has hit all our families and all levels of government very hard. Pinal County has already eliminated 120 Full-Time Positions and laid-off 40 workers. Many other cost saving measures have also been executed. The Sheriff proposes we use our Budget Stabilization Fund (Rainy Day Fund) to fund his unit. We are already using $5 million dollars from this fund to balance this year's budget and we are expecting the State of Arizona to cost-shift millions of dollars more to counties when they go into session in January, 2011.

Sheriff Dever from Cochise County has such an anti-smuggling unit, but his unit is funded by the State of Arizona and the federal government. If Pinal County is experiencing such a huge increase in drug and human smuggling, which is the responsibility of the federal government; why aren't they funding this unit also? We need to explore these options and other options. Since many official government reports show that crime is declining in Arizona, can the Sheriff shift current personnel to this unit?

The Pinal County Board of Supervisors does intend to reschedule this work session on the proposed smuggling unit in the next several weeks. Again, thank you for your email and interest in Pinal County government.

At least Rios took the time to respond to my email. As we know, smuggling is a multi-billion dollar industry in this country. Large corporations and banks employ cheap undocumented labor and launder tons of drug money. These are facts. For these entities to be able to do this, they must gain the support of accomplices better known as politicians. We need to weed those criminal elements out of our government.

This whole problem seems to boil down to money. Regardless of how much money the government throws at a problem, they will always fail. From what Chairman Rios told me, I’m under the impression that the citizens of Pinal County aren’t worth protecting.
Posted by Harry L. Hughes III at 6:45 PM 1 comment: