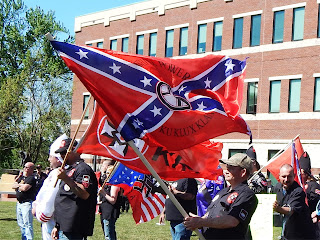 Despite the strong irrational objections and negative publicity, from the NAACP,  the National Socialist Movement held a public rally in downtown Rome, Georgia, on Saturday April 23, 2016. This was perhaps, the largest Pro-White civil rights rally in more than a decade. The N.S.M. reached out to all Pro-White organizations, in order to promote solidarity and a united front.

N.S.M. Commander, Jeff Schoep said, “Apparently, the leaders of the NAACP today feel that only non-Whites are entitled to representation, based on ethnicity. How much more racist could they be? We will engage their leadership anytime, anywhere, in an unedited debate and let the American people themselves, decide who the real racists are.” 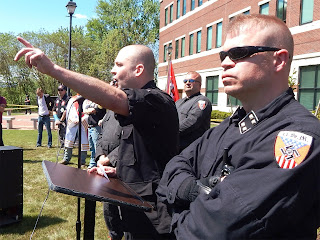 On the evening before the public rally, the N.S.M. held it's annual national meeting and banquet, at the Georgia Peach Oyster Bar, in Temple, Georgia. During this meeting, we solidified plans for the party's political goals and activism, for the next twelve months. Once we concluded our business, the meeting was adjourned, in order to make preparations for the next day's rally.

The current political climate in America ignores the major issues most American's are concerned with, including but not limited to enacting an America First Policy in Government, slamming the door on illegal immigration, White rights issues, crime, and countless other issues affecting the radically shrinking White majority in this Nation. "The time has come for White American's to reclaim their destiny, bring back American jobs, and reclaim our Nation from the Zionist stranglehold it has fallen under." stated Commander Schoep. 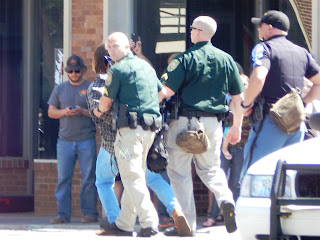 The focus on this rally was to address illegal immigration, the erosion of our First Amendment rights and the destruction of Confederate historical sites, throughout the South. Commander Schoep was also highly critical of the corruption that has infested, both, Republicans and Democrats and that it was time to call all corrupt officials on the carpet. Other topics addressed were the continued failures of our nation's foreign and domestic policies, the poor treatment of returning combat veterans and the ongoing debacles inside the embattled Veterans Administration.

An N.S.M. rally wouldn't be complete, without an assortment of miscreants, Marxists, Social Justice Warriors and counter protesters making a commotion, chanting and uttering lots of unintelligible gibberish. We were not all too shocked to see what kinds of delusional mindsets are coming out of today's liberal academia. At least two of these protesters became disorderly ans were taken into custody, by police.

Following our successful rally, our motorcade exited the venue's parking garage and dispersed, before returning to our hotels, so we could prepare for our after event, which was also shared with the participants in the Rock Stone Mountain rally, held earlier in the day. 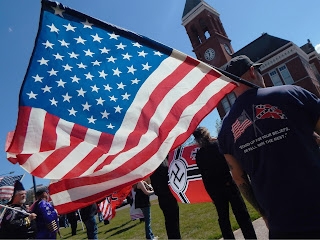 Our after event included a cross and swastika lighting ceremony, held outside the Georgia Peach Oyster Bar in Temple, Georgia. Good food and live music, from three bands, were also part of the entertainment, fun and camaraderie.

Once again, the National Socialist Movement conducted a public rally and after event, without violence or arrests. Sadly many city officials attempt to marginalize certain groups, especially White civil rights organizations. In doing so, they spread tremendous amounts of misinformation and falsehoods, without even hearing our social and political message.


Both events were held within 70 miles of each other, commemorating the upcoming Confederate Memorial Day, and featuring banners and signs, as well as Confederate flags. Over in the city of Rome, Georgia, the Ku Klux Klan, together with the neo-Nazi National Socialist Movement and the Aryan Nation took part in a so-called “free speech” rally in front of the Floyd County Law Enforcement Center on Saturday. RT 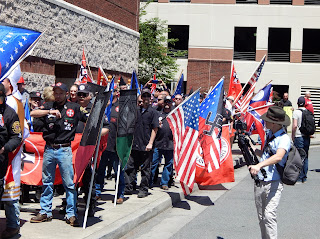 For I am convinced that we shall never be able to think rationally about our own survival until we have the courage to say, in our own minds: We are Americans, White men of the West. And we have an unquestionable right to this country so long as we have the power and will to defend it. -Dr. Revilo Pendleton Oliver