My autumn vacation and fact finding trip, south of the border to Nogales, Sonora 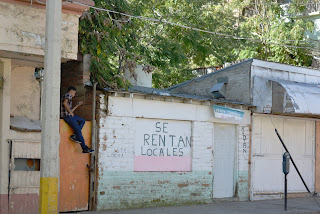 The intense 100° F weather of Arizona's long summer is finally over, as autumn has officially arrived. Taking advantage of this pleasant weather, I embarked on a week-long excursion, across Arizona and into Sonora, Mexico. In seven days, I covered almost 1800 miles and visited a variety of historic sites and museums. Anyone that has had the opportunity to travel with me, knows my trips are sometimes dangerous, but always educational.

The drive to Nogales, along Interstate 19, from Tucson is almost always the same. Upon reaching my destination, I found a $4.00 parking lot, grabbed my camera bag and made the short hike to the Port of Entry, where I quietly walked into Mexico. As with my previous visit, there were very few gringos (tourists). News of cartel violence keeps those retirees away from border towns, like Nogales. Many of the storefronts, lining the gritty streets, were vacant and shopkeepers were outside trying to lure customers to their merchandise. 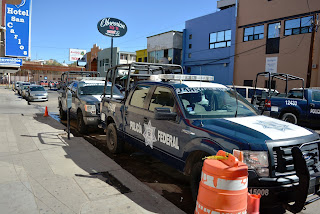 Once of got off the beaten path, the armpit of Nogales was soon, before my eyes. I walked down streets, lined with piles of trash, as stray dogs were looking for a little bite to eat. After rounding one corner, I could smell marijuana and immediately saw a lookout sitting on a wall. Less than ten minutes later, across the street from the Tecate Bar, some young fellow walked up to me and advised me this wasn't the place to be taking photographs.

Looking the part of a tourist, I made nice, with this mouthy anti-photography guy and continued with my walking safari. Of course, we came across the usual Communist and Marxist revolutionary graffiti, just outside the tourist area, too. With open borders, we would be inviting this extremely anti-American and dangerous ideology into our country. It's bad enough that it's already being taught in our public schools, under the guise of “ethnic studies.”


Late Sunday, the White House offered a list of demands in return for a deal that would let some 700,000 recipients of the Obama-era Deferred Action for Childhood Arrivals stay in the U.S. The list included funding of the U.S.-Mexico border wall, hiring more Immigration and Customs Enforcement agents and immigration judges, E-Verify, and the punishment of sanctuary cities. More 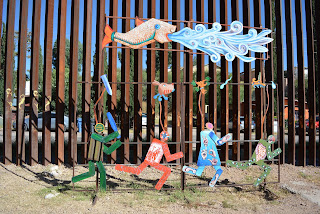 California became a “sanctuary state” on Thursday (10/05/207) as Democratic Gov. Jerry "Moonbeam" Brown signed legislation protecting illegal immigrants in defiance of the Trump administration. “The bill risks the safety of good law enforcement officers and the safety of the neighborhoods that need their protection the most,” Attorney General Jeff Sessions said last month in Portland, Ore., urging Brown to reject the bill, according to The Los Angeles Times. FoxNews


“ICE will have no choice but to conduct at-large arrests in local neighborhoods and at worksites, which will inevitably result in additional collateral arrests, instead of focusing on arrests at jails and prisons where transfers are safer for ICE officers and the community,” acting ICE Director Tom Homan wrote in a statement obtained by Breitbart Texas. More 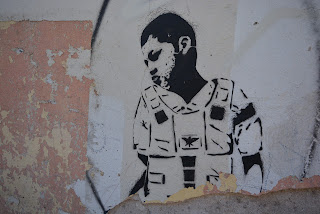 For those of you with short memories, think back to 2010, when Arizona passed SB-1070. The leftists and open borders advocates continuously shrieked about how states cannot enact or enforce their own immigration laws. Officially, the Federal government is taxed with immigration enforcement, so anything California does to "Trump" existing statutes, should technically be "null and void," unless some rogue activist judge in Hawaii files some gibberish, in the form of an injunction, which would be upheld by more activist left-wing judges in the Ninth Circuit Court.

In an interview with the Washington Post, Gutiérrez said, “I warned Democrats not to negotiate.” He said that Trump “has never wavered from his xenophobic positions” and added that “what they want to do is criminalize and delegitimize Latinos.” Breitbart

In other news, the National Socialist movement will be holding their fall rally a little earlier, this year. The purpose of this rally will be to protest the ongoing problem of refugee resettlement in Middle Tennessee and to draw attention to the recent Emanuel Samson church shooting in Antioch and the way this explosive story has been buried by the national media. The tragic events in Antioch, which was retaliation for the Dylann Roof shooting in Charleston, illustrated that the national media only cares about pushing its false narrative of White racism and black victimhood. More 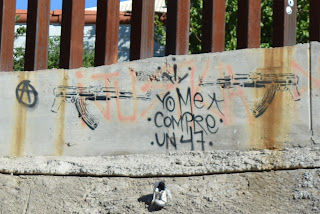 For Immediate Release: The leader (Jeff Schoep) of the pro-White National Socialist Movement (NSM – NSM88.ORG) today revealed the organization's winter 'street action' is going to be held on October, 28th instead of November. Additionally, the event will be held in Murfreesboro as well as Shelbyville, Tennessee. The NSM will be joined by other member organizations of the Nationalist Front, including League of the South and the Traditionalist Workers Party. NSM Media

“You have a class of young strong men and women, and they want to give their lives to something. Advertising has these people chasing cars and clothes they don't need. Generations have been working in jobs they hate, just so they can buy what they don't really need. We don't have a great war in our generation, or a great depression, but we do, we have a great war of the spirit. We have a great revolution against the culture. The great depression is our lives. We have a spiritual depression.” -Chuck Palahniuk, Fight Club