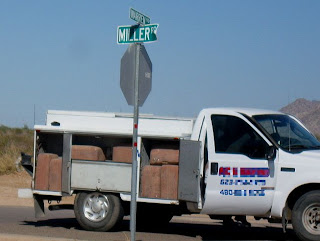 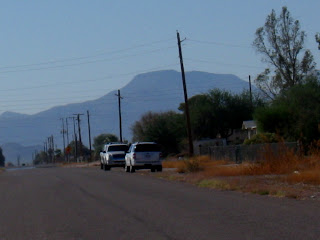 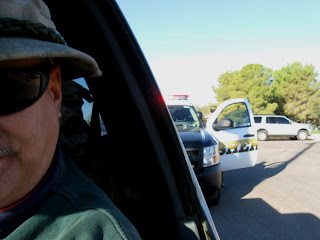 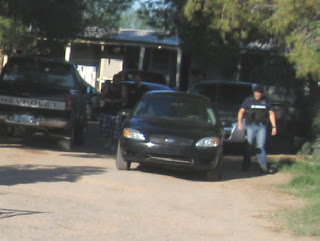 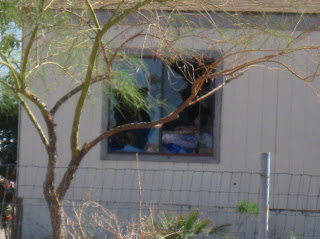 Thursday, October 27, 2011. . . A multi-agency narcotics operation took place in the Maricopa, Thunderbird Farms and the Hidden Valley areas of western Pinal County. After speaking with a confidential law enforcement source, I was advised that nine(9) homes were raided. An overwhelming force, utilizing darkness, surprise and a few flash bangs quickly awakened my normally quiet agricultural neighborhood.

Multiple police vehicles, including a K-9 unit, were observed racing through the neighborhoods, on their way to attack the next target. This operation has successfully managed to "clean up" my neighborhood. Unfortunately, it won't stay that way for long.

At Warren & Miller Rd. the US Border Patrol took custody of a load vehicle containing bales of marijuana. The smugglers were clever enough to disguise their cargo as a work truck. Obviously, they weren't smart enough.

A suspect was observed being taken into custody at a home north of Papago Rd. That's one less criminal on our streets poisoning and raping our land.

Law enforcement officers made contact with me on multiple occasions during this operation. I told them who I was and provided them with business cards.

One of the ICE agents thought K-9 Bailey was cute.(More like silly) She's very popular on ops.

A multi-agency drug sweep was conducted this morning in the Thunderbird Farms area.

Investigators from the Pinal County Sheriff’s Office with agents from U.S. Immigration and Customs Enforcement and Homeland Security Investigations executed search and arrest warrants at a number of locations in and around Phoenix as part of a far-reaching investigation involving narcotics trafficking, according to PCSO. http://www.inmaricopa.com/Article/2011/10/27/maricopa-drug-raid-thunderbird-farms

Thanks to the keen nose of one of our dedicated Border Ranger's on patrol with K9 Unit "Bailey", a normal looking repair truck is exposed for its true illicit content. The cartel will stoop to any level of subversion to poison our children, destroy families, and ruin our American way of life. That is why the U.S. Border Guard stands armed and ready to meet narco-terrorists head on. Border Rangers stand vigilant on the front lines of the invasion.

PHOENIX (AP) - Federal and state authorities are serving search and arrest warrants related to drug trafficking at homes in across the Phoenix metro area.

In Pinal County, investigators found 1,500 pounds of marijuana at one home.

From the Pinal County Sheriff's Office. . .

111026038 Traffic Violation (Citation) MARIJUANA - SMUGGLE
Incident Address : W I-8 FRONTAGE RD; MM 148 MARICOPA
Time Reported: 06:39
Time Occurred between: 06:39:31 10/26/11 - 06:39:31 10/26/11
Cad Info: PPL MOVING IN VEH CALLING IT A PURSUIT, CALLING BP. 3 RUNNING NB TOWARD MT. TOWARD ROBIN AND WARREN. 1C34 GET AHOLD OF 1C35 I AM IN CG. BP ENRT CONFIRM HIS LOCATION. PER L8 MOVE THE TRAFFIC TO ANOTHER CHANNEL CONTACT AIR ASSETS, AND K9. LAST LOCATION WAS EB MM 150 ON I8. MCSO ENRT 3 RUNNERS, HALF MILE NORTH INTO THE BRUSH. MALE CAMO AND BLACK SHIRT 2ND MALE GRAY SHIRT AND JEANS. 3RD MALE UNK. JUST E OF MM 149, MALES TO THE NORTH OF THIS LOCATION. DPS ASKED FOR A K9, WILL CALL BACK. MCSO ADVS OF UPDATES, ALSO HAS TO CHECK FOR K9. BP IS CHECKING WITH A K9. 1C33 IS RESPONDING AS A 2 MAN UNIT, L3 WILL BE AIR SUPPORT ETA 3. L3 WILL BE AIR SUPPORT ETA 30 NOT 3. HAVE HIM RESPOND, HE CAN SPOT. PER L8 S9 IS COMMAND UNIT. PER MCSO NO K9 AVAIL.. TWO UNITS ERNT, AND ALSO THIER NARC UNIT DPS CXLd. WE ARE 1 MILE WEST OF VEJIA TRKSTOP. BP IS ON SCENE, SETTING PERMETER. L3 I AM JUST NOW ENROUTE TO GET THE PLANE. S7 ADVISED. **MCSO HAS K9 UNIT ENRT... THEY ALSO HAVE PLAIN CLOTHES DETECTIVES ENRT ALSO **DO WE STILL NEED MCSO UNITS TO RESPOND?? D1143 TF HAS BEEN NOTIFIED. NEG FOR ADDITIONAL UNITS FROM MCSO. IS FOX 1 UP THROUGH MCSO. MCSO CXLing REG UNITS.. AND FOX1 IS NOT ON. HAVE TASK FORCE GO TO C103 CHARLIE FOR THE TRK MCSO IS TO THE WEST OF UNITS ON SCENE. DONT CLEAR THE CHANNEL TILL WE GET A COUNT FROM EVERYONE. SWITCHING BACK TO CHANNEL 1. NEG CONTACT WITH S9 TO SEE ABOUT CLEARING THE CHANNEL. NO ARRESTS WERE MADE AND ALL THREE SUSPECTS ARE STILL OUTSTANDING. NFI CASE