Media spews male bovine fecal material: KPHO Channel 5 reports on how drug and human smuggling is great for Arizona and the economy 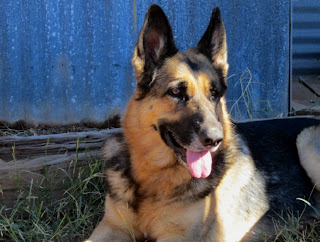 Thunderbird Farms: Shortly after 2:30 PM, Thursday, March 21, 2013, a couple of my friends were walking their dog, three doors down the street from my home. As they walked by a recently vacated rental home at 49818 W Val Vista Rd, a pair of Hispanic male subjects bolted from a broken window and assaulted one of my friends, as they were fleeing. My friend's injuries included a couple of minor lacerations. She was also very shaken up and scared. CAD 130321163

This is the same home that was formerly occupied by so many people that they managed to create a sewage problem, just a couple of months after setting up housekeeping. After dealing with their very first set of tenants, the property owners don't want to be landlords, anymore. I really don't blame them. During the time they occupied the home, it was impossible to tell how many people were living there. It was a large number. There were people coming and going at all hours of the day and night. Don't rent to Mexicans! 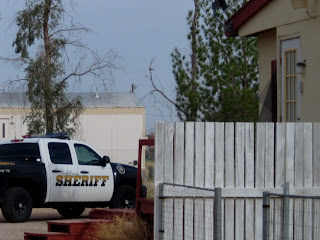 The Pinal County Sheriff's Office was immediately notified of the burglary and assault. Being so close to my home, I promptly responded to my friend's call for assistance. By the time I arrived, the suspects were gone. K-9 Bailey and I made an initial sweep of the area. I found nobody hiding in or around the adjacent structures.

It would have not surprised me if the suspects were sitting comfortably in my next door neighbor's living room (That actually happened before). The former renters and possible suspects were likely related to or at least very good friends with my less than pleasant next door neighbors. As of late, there have been numerous "shenanigan" type incidents on my block. K-9 Blondie has alerted on people lurking about at night on several occasions. Blondie lives up to her reputation as that aggressive dog. (From the J.T. Ready homicide)

When the sheriff's deputy arrived, he appeared to be less than enthusiastic about performing his duties. It's quite possible that a person or persons still could have been hiding in the home. The deputy made no attempt to ascertain that. He was not a “go getter”. I saw him as a deputy that was just marking his time until retirement. Currently, these potentially dangerous suspects are sill at large.

Prior to leaving, the deputy told me that he suspected this may be the work of drug or human smugglers. They have been known to use vacant buildings to store drugs and people, before shipping them off to another destination. None of this was news to me. Much of the unlawful activity in my neighborhood is directly or indirectly related to the Mexican border, illegal aliens and narcotics smuggling. 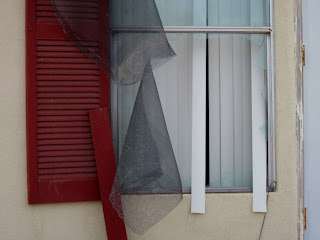 Thursday night: At 11:05 PM, the former tenant returned to the home, they were evicted from. Yes, that sounds weird, especially after the break in. Why would they do that? Observed, were an unknown number of subjects, including one female, in a black 4 door sedan. At least one was a Spanish speaker. Did they forget that they don't live there, anymore? The P.C.S.O. was notified and two units were dispatched to investigate. CAD 130321291

If that wasn't strange enough, that suspicious car pulled into my next door neighbor's yard and parked under a carport area, where cars are worked on. There are lots of inoperable vehicles parked in this area. They must not be very good at fixing cars. Oddly, this car's trunk suddenly needed some immediate mechanical attention at midnight. Now, we have neighbors clanking and banging on things past most people's bedtime.

There's an out building/shed located at a residence across my street to my east at 10137 N White Rd. Over the last several weeks, I've observed several Hispanic male subjects in and around this shed. It's quite possible that the owner(s) of this property are harboring illegal aliens or are in some way involved in drug and human smuggling. While the homeowner is at work, there's no telling what these people are doing. 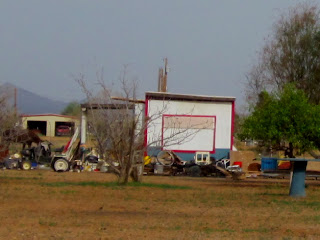 Several years ago, my portable evaporative cooler (that was sitting on my front porch) mysteriously grew legs and walked across the street. It was found sitting in my less than neighborly neighbor's yard. Of course, none of the occupants claimed to have stolen it. There were multiple drug addicts living at this address, at the time of the swamp cooler incident.

Of course, the homeowner, the person that's supposed to be ultimately responsible (legally obligated) for incidents on their property (including long term guests and couch surfers), denied any knowledge and accepted absolutely no responsibility for what was taking place on her property. It's obvious to me that this homeowner is a poor judge of character and has little or no regard for the impact her bad business decisions have on the rest of the neighborhood.

For those of you that have been to my home and ever wondered why there are surveillance cameras, several dogs and steel bars on my windows, this is why. It's to protect me from my neighbors and their "friends".

"They live here. They shop here. They spend their money here," said Bruce Bracker, whose family owns a department store in downtown Nogales. 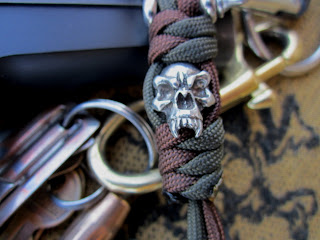 But the economic impact of the border is also felt far from the border itself. A recent border security expo held in Phoenix demonstrated how much money is in play in the effort to secure the border. Full Story

Oh yea! Our broken border is great and wonderful news. I'm sure my neighbors, especially after what just happened to them, would agree that we should leave our border wide open and let the carnage and crime continue. After all, corporations are cashing in on it and that's such a good thing.

Is KPHO spitting on the faces of its' viewers? I take it that way. How is money more important? Bear in mind, our media is owned by greedy Zionists. It's all about money. They could care less about the people. Turn off your television! By the way, KPHO spent quite a bit of time off the air on Thursday. That was the best news I heard all day. Karma?