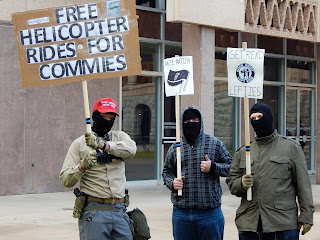 Until the Donald Trump presidential campaign, the average American was largely unaware of the antifascist movement or the Globalist financed foot soldiers, of the radical Marxist left. They are most likely identified as skinny jean black hoodie clad protesters that engage in degenerate acts of violence and vandalism. Having been involved with the National Socialist Movement, for some time, I was all too familiar with their twisted ideology and agenda. Their goal is to destroy the United States and its' sovereignty. Video Video

On Friday, January 20, 2017, it was Inauguration Day and I stopped by the Arizona State Capitol in Phoenix, where people were protesting the incoming President of the United States. Although most of the pitiful attendees were peaceful, not all were acting in a civil manner. I managed to record these self identified antifascists hounding, intimidating and silencing people that had opinions, different from theirs. These antifascists were rude vulgar and pathetic. Their crude behavior was completely unacceptable. I recorded video of their unruly behavior, for all to see. Video Video 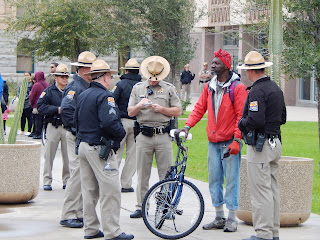 As I mingled through the crowd, I saw some familiar faces and without the masks, this time. The very same antifascist I recorded attacking two people, for simply walking down the sidewalk, at a mosque protest on October 10, 2015, were present. They spotted me and identified me by name. After a short and civil conversation, they decided to hound and intimidate three other people, who were obviously Trump supporters. They even went as far as calling the Asian man a "White Supremacist." Recap

From Cronkite News: Outside the Arizona State Capitol, dozens of people gathered in protest of Donald Trump’s Inauguration Day on Friday, Jan. 20, 2017. The protesters had plenty to say, and as follows, many visuals to accompany their chants. CN


About 100 people participated in the protest. A few Trump supporters showed up but everyone kept their heads. Protesters chanted ,”Hey hey. Ho ho. Donald Trump has got to go,” and, “Not my president,” among other phrases. A large inflatable depicted a caricature of Trump dressed in the white robes of a Ku Klux Klan member emblazoned with a Nazi swastika. KTAR 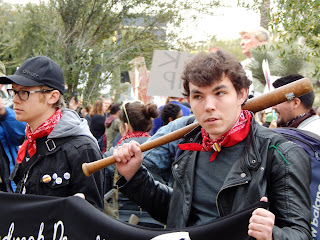 The loss of public trust, due to "pseudo-journalism"... When it comes to so-called journalist being objective and ethical witnesses to news and history, it's hard not to remember my experience behind the scenes of the A&E production of "Generation KKK," a supposed documentary series. In reality, scenes were staged and faked, while "actors" were paid sums of money for their participation. And people wonder why the term "fake news" became one of this year's biggest buzzwords.


At least six journalists were charged with felony rioting after they were arrested while covering the violent protests that took place just blocks from President Trump’s inauguration parade in Washington on Friday, according to police reports and court documents. The journalists were among 230 people detained in the anti-Trump demonstrations, during which protesters smashed the glass of commercial buildings and lit a limousine on fire. NYT

"A&E learned last night from the third-party producers who made the documentary that cash payments — which we currently understand to be nominal — were made in the field to some participants in order to facilitate access," the statement read. " While we stand behind the intent of the series and the seriousness of the content, these payments are a direct violation of A&E’s policies and practices for a documentary. USA Today 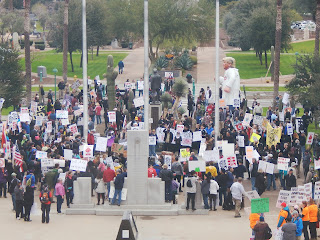 Web series producer Jack Keller, independent journalist Matt Hopard, independent photojournalist Shay Horse and freelance journalist Aaron Cantu were all arrested where protesters clashed with the police at 12th and L streets where property was being damaged. Alex Rubenstein of RT America and Evan Engel of Vocativ were charged with felonies earlier this week. More

It was high time that prosecutors started handing down felony charges to those than engage in such violent behavior. In fact, federal conspiracy charges should also be considered, since this violent movement most likely made advance plans to visit our nation's Capitol, with the intent of engaging in destructive behavior. 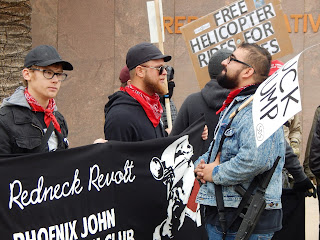 By the authority vested in me as President by the Constitution and the laws of the United States of America, including the Immigration and Nationality Act (8 U.S.C. 1101 et seq.) (INA), the Secure Fence Act of 2006 (Public Law 109 367) (Secure Fence Act), and the Illegal Immigration Reform and Immigrant Responsibility Act of 1996 (Public Law 104 208 Div. C) (IIRIRA), and in order to ensure the safety and territorial integrity of the United States as well as to ensure that the Nation’s immigration laws are faithfully executed, I hereby order as follows: Link

"It has been a one-sided deal from the beginning of NAFTA with massive numbers of jobs and companies lost. If Mexico is unwilling to pay for the badly needed wall, then it would be better to cancel the upcoming meeting." The Hill