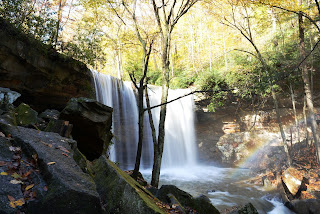 After enjoying some of the sights and smells of Pittsburgh's Strip District, I finally returned from a week-long trip through Tennessee, Kentucky, Ohio, West Virginia, Maryland and Pennsylvania. Before touring the wooded regions of Appalachia and taking in the fall foliage, I attended the long anticipated White Lives Matter rally in Shelbyville, Tennessee.

On Saturday, October 28,2017, the National Socialist Movement, under the Banner of the Nationalist Front and accompanied by comrades, from the League of the South, Traditionalist Workers Party, Vanguard America and many other pro-white groups, conducted a rally on the streets of Shelbyville, Tennessee. According to some experts, this was the second largest White Nationalist rally in a decade. My Photos 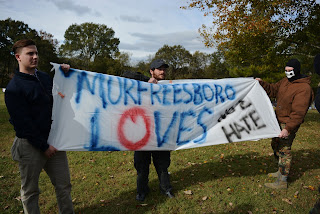 Security was extremely tight and hundreds of nationalists had to pass through a makeshift choke point, namely a city street sweeper, before filing through two separate security screening checkpoints, before being allowed to enter the rally venue. The list of “prohibited items” was unusually long. Of course, this screening process took quite a bit of time and our counter protesters grew impatient, as they stood in the dank weather. A swarm or reporters, from around the world, also had to pass through both checkpoints.

Mainstream media reporters were rather pushy, if not downright rude, at times. During the speeches, it became necessary to form a perimeter around the speaking area and microphone to prevent the “journalists,” from getting in the way and blocking the N.S.M's cameras, which were recording the rally.

The purpose of this rally was to expose and emphasize the deadly consequences of importing Islamic refugees, along with their violent ideologies, into the United States, via chain migration and refugee resettlement schemes. On September 24, 2017, Emanuel Kidega Samson, a Sudanese refugee, open fired on a congregation at the Burnette Chapel Church of Christ in Antioch, which is not far from Shelbyville. And that wasn't the first incident in and around middle Tennessee, where churches have been targeted. 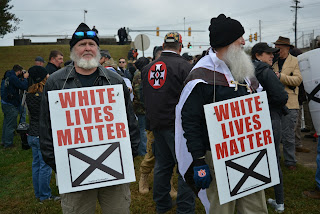 In the days following the Shelbyville White Lives Matter rally, we Americans, have once again, seen the carnage inflicted on unsuspecting  innocents, at the hands of a Muslim “immigrant” brought into this country, under a “diversity lottery.” This time, it was in New York City. The next time, it might be in your city. Unlike our political leaders, the Nationalist Front seeks to address our nation's immigration problem directly, instead of dancing around the issues and pretending it's not really happening. Accepting casualties under political correctness is an unacceptable option.

As our rally continued and our speakers had their say, the Antifa and Communist protesters spouted gibberish and played music. As always, the protesters weren't seeking to engage in an intelligent debate or discussion. Their sole purpose was to make noise, while acting like children. Perhaps, they weren't acting. 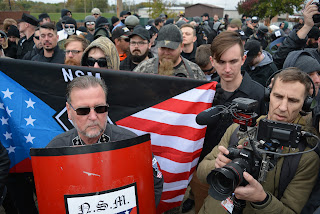 Following the rally, our motorcade went to Henry Horton State Park and enjoyed a picnic, consisting of sandwiches and non-alcoholic beverages. Apparently, a police helicopter followed us to our picnic and shortly after that, a local television news helicopter appeared and circled the pavilion area for quite some time. Eating sandwiches and drinking soda pop must be newsworthy and justified the consumption of all that aviation fuel. By the time we were ready to pack up and leave, news reporters began to show up. Having nothing else top say to the reporters, we packed up our party and made our own way to various eateries for continued conversation and camaraderie.


Anderson said he was a counter-protester and walked to the white nationalist side of the rally where he was put in a headlock. Anderson said he stayed in the headlock for about 10 seconds before wrestling out and telling the person to “get off him.” WSET 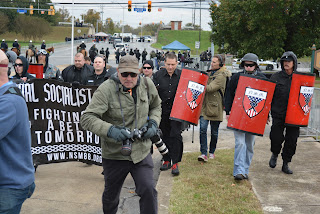 If it weren't for violent leftists, there would be no need for police: An estimated 300 officers in Shelbyville and more than 400 in Murfreesboro, officials said. While the total cost of rally security hasn’t yet been tallied, the agencies involved say their keeping of the peace could turn their plans into a model for other states to copy.  More


This confirmed suspicions that this event was to be a set up or "ambush": Officers scoured the downtown square in Murfreesboro to spot for anything suspicious. Prior to the rally, Murfreesboro police found a variety of items including bricks, hammers, butter knives, and scraps of metal inside the perimeter. More