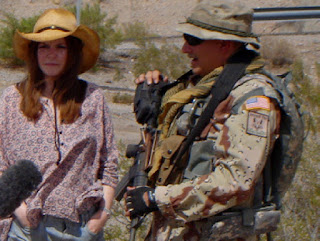 Finally, after a summer's long wait, we get to see the end result of our BBC documentary project we conducted in the Vekol Valley and Sonoran Desert National Monument. After a full day of recording our activities, we were edited down to just a few minutes. I'm not all that surprised. That's generally how editing works, especially when it comes to groups such as the National Socialist Movement. I gave it to them straight. Just like leading a horse to water, you can't make them drink. Previous blog

I thought he best part was when I told Stacey Dooley that it really doesn't feel that hot wearing long sleeves and deuce gear when it's 110 degrees. This show was primarily a pro-illegal commentary. I knew that would more than likely be the case from the start. Biased one sided stories are called “documentaries”, these days. Watch it here. Click the "free user" link. 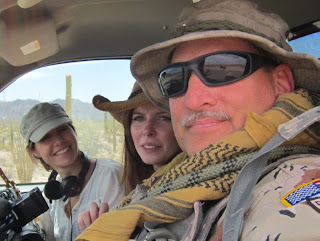 The show is an hour long and our segment appears shortly past the half way point. The majority of the program is sympathetic to the invading foreigners who wish to displace US citizens and taker over our country. We have well over 23 million unemployed citizens and some 47 million people receiving some form of government assistance.

We are broke, going bankrupt, deeply in debt, so lets just open the flood gates and let in millions of more unskilled illiterate people, so they may go on the public dole and fill up our prisons. The backs of U.S. Citizens are breaking under the humongous burden of “minority weight”. Total collapse is imminent.

All of the references I made regarding our lifesaving, search & rescue, and humanitarian efforts were intentionally omitted. As with most stories, there has to be a villain. Myself, our comrades and the U.S. Border Patrol filled that role.

One of my friends in the United Kingdom called the show a "hatchet job" and another said, "You give them the real deal, then they chop you up and spit you out." I love the way that Stacey talks about starving families with no options, while she's standing front of two obviously well-fed young women. Thankfully, some people are paying attention. The puppet masters apparently can't smell what they're shoveling. 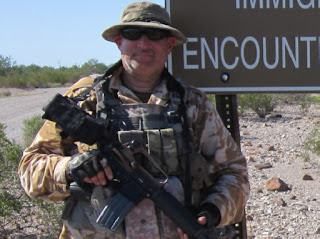 Well, I couldn't agree more with what some of my friends have said. I was also fully aware that the BBC is a government controlled entity and that entity is controlled by Zionists and globalist gangster bankers. Knowing who runs the media, I am not surprised that they worked the story the way they did. They can't have the truth getting out, can they? Then, their gig would be up.

There are a few inaccuracies in the BBC's story. The "padre" in Mexico claims the border hoppers do not carry drugs. In reality, they do and quite often. It's how many of them pay their way across the Mexican border. They are called “mules”. With all of the rampant corruption on both sides of the border, it wouldn't surprise me at all, if this “padre” was working for the cartel and playing both sides.

Others bring dope here to sell and live off the money they make until they find work. Others sell dope to pay for the false or stolen identities they will need to infiltrate into our communities. Of course, not one mention of the tens of thousands of violent gang members that enter our country to prey on our citizens. Nope! Not one word. 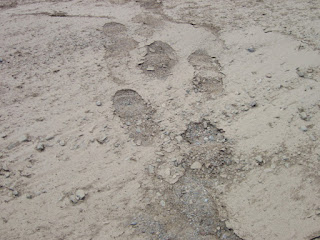 In recent weeks, my neighborhood has been invaded by melon and cantaloupe pickers. In their wake, we had a machete wielding assailant and a stabbing take place just one mile from my home. Of course, Stacey Dooley and the BBC film crew were long gone to see the aftermath of illegal immigration and how it's destroying MY country. All we saw were well fed starving immigrants wearing new clothes and poor excuses for parents desiring to bring sick children across the border to infect American kids with their diseases.

During the BBC crew's visit, I spelled out everything to Stacey and the camera crew. I explained how it's all a racket and an industry of exploitation. These poor and illiterate people are being conned. I told Stacey how the cartel gives the "silver or lead" (plata o plomo) option. Either carry the dope or they shoot them on the spot. Of course, they left that part out. The drug cartels and human smuggling operations are controlled by the same thugs. plata o plomo

I was really surprised Stacey Dooley went to some of the places she did, especially the storm sewers that were home to homeless Mexicans, just south of the border. While here, she did nothing, but complain about the heat and the boots she had to wear. Before getting this gig, she was apparently into fashion. 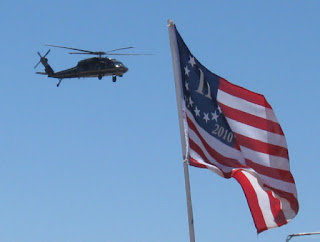 Another serious inaccuracy was that Stacey said there were some 6 million illegals in the United States. In reality, there could be 50-100 million. We have no way of knowing for sure. One thing is certain, the "official" government numbers are completely wrong. That's 100% guaranteed. Remember how many we saw in Charlotte, North Carolina a few weeks ago?

The UK has already been overrun by foreigners, especially Africans and Middle Easterners. The United States is currently under siege and approaching the breaking point. We are next, unless we fight back. Remember, multiculturalism, diversity and integration were forced upon White America at the point of a bayonet. When anyone spoke out in opposition, they were "branded" as racists and bigots, then targeted by the government and media.

One final question. Did the coyote rape Maria or did she give it up willingly? The “padre” knew the reality of what the human smugglers do to women. At least he was honest about that.

“I'm a 9th generation American and patriot (1737). My forefathers served in the Pennsylvania Militia. On June 27, 1781, they were called upon to perform a tour of duty. I'm still protecting freedom and securing the border, 275 years later.” --Harry L Hughes III
Posted by Harry L. Hughes III at 10:03 PM No comments: