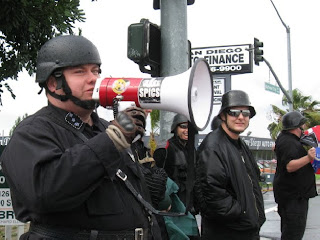 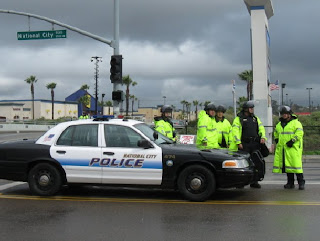 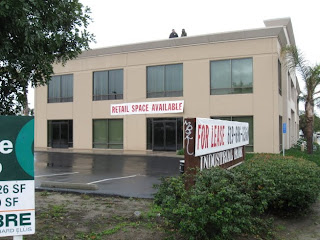 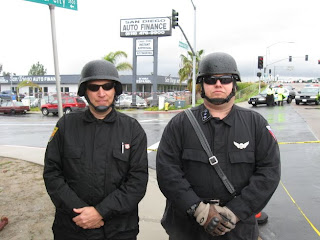 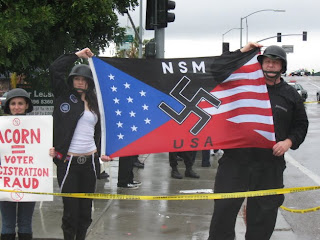 I normally don’t like going to California. At one time in my past, I often traveled there on business and pleasure. Not anymore! I often find myself calling it The People’s Republic of California giving reference to Communist China because Californians are not nearly as free as they think. It’s most unfortunate that California is often the trend setter for other states.
The purpose of this particular visit was to protest the A.C.O.R.N. office in National City. I believe this organization which receives taxpayer funding, to be totally corrupt and needs to be exposed for what it is.
I personally, cannot idly sit on the sidelines and watch a taxpayer funded organization be a party to assisting anyone that engages in the smuggling of humans for the purposes of child prostitution. I can certainly take a day out of my schedule and stand in the pouring rain to get the message out.
ACORN California: Changing the name to protect the money
In what is tandamount to a PR press release, Kate Linthicum at the LA Times reports that ACORN California has broken away from it’s “embattled” national parent organization. Cited throughout the article are ACORN higher ups, expressing their concern over ACORN’s tarnished reputation, and their distraction with legal challenges interfering with the mission ACORN.
.
Yet the face of the new ACORN will essentially remain the same as the old… only the name has changed.
http://www.floppingaces.net/2010/01/14/acorn-california-changing-the-name-to-protect-the-money/
Oh yea! ACORN is going to change their name? That is certainly an original idea. People that wear out their welcomes with their real names will often resort to using an alias. Businesses and organizations do the same thing. A crook is a crook regardless of what they are called.
On Friday afternoon, we departed Phoenix and made our way to California. It’s a long and uneventful drive through the desert. Upon arriving, we met up with other elements of the protest.

NATIONAL CITY - Fifteen to 20 members of a neo-Nazi group protested outside an ACORN office in National City, with at least 20 police officers watching Saturday afternoon.Protesters are carrying flags of the United States and the National Socialist Movement, said National City police Sgt. Mike Harlan.
.
The movement is described on its Web site as the largest white nationalist group in the nation, No arrests have been made and no opposing groups have turned out, Harlan said. The Web site encouraged participation in Saturday's protest to alert the public to the "serious threat" posed by ACORN. The group said ACORN has engaged in voter registration fraud under government funding.
http://www.sandiego6.com/news/local/story/Neo-nazi-protest-ACORN-National-City/jF__4ytZYU-oYm2w4sk5Aw.cspx
Despite the rain, our protest went on. National City Blvd. Was closed for several hours and traffic was re-routed. We did managed to attract a few spectators and one odd individual even returned with a megaphone in an attempt to tell us what he thought.
http://www.youtube.com/watch?v=--vlJo7c4gA
http://www.youtube.com/watch?v=6Z5nHpdnKmA

ACORN videos from National City, San Bernardino cause stir [Updated]
The chairman of the Republican Party in San Diego County and a Republican member of the Board of Supervisors have joined Gov. Arnold Schwarzenegger in calling for an investigation into ACORN.
Tony Krvaric, chairman of the local GOP, and Supervisor Bill Horn said they are particularly suspicious of the group's voter registration efforts in a local Assembly race and a San Diego City Council race, both won by Democrats.
An undercover video shot at the group's office in National City purports to show workers willing to help someone interested in setting up a prostitution ring, possibly with girls from Tijuana. The video has been shown nationally on commentator Sean Hannity's Fox News program.
http://latimesblogs.latimes.com/lanow/2009/09/acorn-videos-spark-controversy-in-san-diego-san-bernardino.html
Non of our "usual opponents" bothered to show up to counter demonstrate. Normally, the ARA, anarchists, Brown Berets and pro-illegal immigration groups will engage in protests against us. These groups often number in the hundreds. Apparently, they are not motivated enough to stand out in the rain for a couple of hours. Perhaps, the rain would have been too much like taking a shower.
It could be quite possible that ACORN is running out of friends. How could anyone possibly turn out to demonstrate in favor of voter fraud, political corruption, human smuggling and child prostitution? Keep in mind that Barack Obama is very good friends with ACORN.
Posted by Harry L. Hughes III at 10:31 AM No comments: