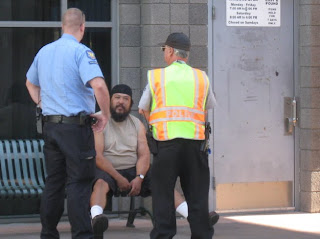 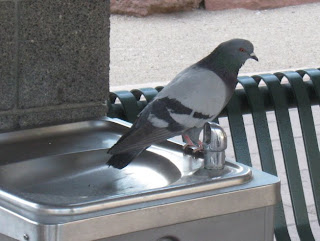 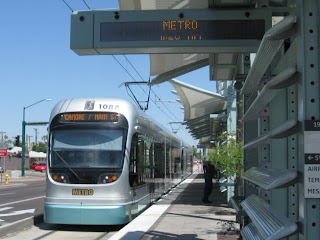 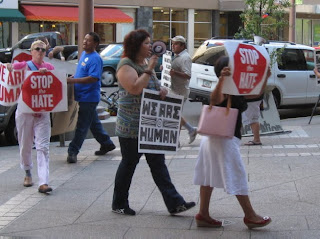 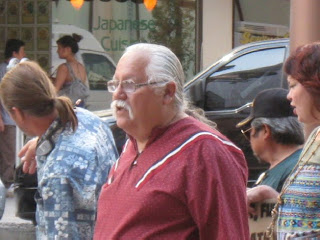 I have been wanting to take a recreational trip to Phoenix using public transportation for the last several months. I finally took this trip today. Due to the nature of public transit systems, I decided to call it an “urban safari”.

We arrived at the park & ride lot in Maricopa shortly before 6:30AM. The “Max” bus was scheduled to depart at 6:40AM. A local publication contributed free fare coupons for this expedition. We arrived in front of the city hall in Phoenix without incident at 7:20AM.

MaricopaXPRESS is regional connector to the Phoenix metro-plex with service to downtown Phoenix and Tempe. MaX provides safe, convenient, cost effective and dependable public transportation. Staff operates from Maricopa City Hall and is available Monday through Friday between the hours of 8 a.m. to 5 p.m.
http://www.maricopa-az.gov/development_services/transit.php

Having not been in Phoenix for no more than 20 minutes, we encountered some police officers questioning a vagrant. Apparently, he upset somebody. I snapped this photo and immediately, another officer came over and asked me why I took the photo. I stated that I was on an "Urban Safari" and that I was a tourist. He was cool and rather talkative after that.

Upon arriving at the Central Station, we purchased all day passes and rode the Light Rail from one end to the other. We encountered more than a day's worth of diversity. Despite a sign instructing passengers to use headphones on audio devices, a Negro sitting a couple of seats behind us was playing some disgusting rap music. Oddly, the most annoying passengers were right behind us.

METRO is the brand name for Valley Metro Rail Inc., a nonprofit, public corporation charged with the design, construction and operation of the Valley’s light rail system. The cities that participate in the light rail system each have a representative on the METRO Board of Directors. http://www.valleymetro.org/metro_light_rail/about_light_rail/

While coming back to Phoenix from Mill AV in Tempe, a Light Rail security guard boarded the train and started checking for valid passes. The fifth person, was a Mexican with tattoos all over his neck and arms. He did not have a valid pass. At the very next stop, he was escorted off the train and cited. The fine for ripping off the city can be as much as $500.

Another Negro directly behind us was on the phone talking about smoking dope. He also said something about shitting himself. I hope he waited until he got off the train.

Shortly after the Negro got off, a Mexican got on. He was playing music too. I guess he couldn't read the rules in English or Spanish. A few minutes later I turned around and noticed he had his pants down. Some girl was sitting right in front of him. He pulled his pants part way back up, but kept his fly open. He walked towards the door and stood there until the train stopped. Every time the door opened he would spit out the door onto the sidewalk. Passengers entering the train would track his spit in on the floor. He finally got off a few stops later.

We took a walk by the 4th AV Jail. We didn't run into anyone we knew. Several minutes later, some dread locked freak shook a cup at us begging for money. He didn't get any.

We were walking down the street and what did we see? Salvador Reza's crew screaming at me. They were shouting, "Stop the raids!" He looked right at me, but apparently, didn't recognize me.

There was about a dozen or so anti-Sheriff Arpaio protesters walking in a circle on Adams ST just east of 1st AV. They were shouting the same gibberish I've heard time and again. The demonstration barely lasted 20 minutes. Afterwards, we got back on the Light Rail and made our way over to Sky Harbor Airport. Luckily, we didn't encounter too many deviates as we walked through Terminal 4.
The illegal aliens in the United States have a crime rate that’s two and a half times that of white non-illegal aliens.
Posted by Harry L. Hughes III at 9:21 PM No comments: