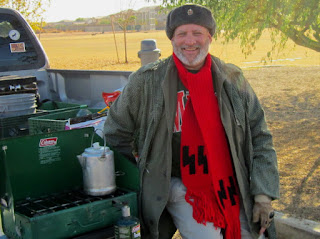 I returned home Saturday evening from the Christmas Turkey and toy distribution at the Maricopa Wells Middle School in Maricopa, AZ. I held my annual tailgate party in the school parking lot and fed people as they waited for the festivities to begin. We enjoyed piping hot coffee, Polish sausages, potato salad, chips and snacks.

Shortly before sunset, Santa arrived aboard a fire truck and there were no chimp outs. The distribution process was well managed and many compliments go out to the Maricopa Police Department. In years past, there were crowd control issues. People became unruly and refused to cooperate with law enforcement officers. 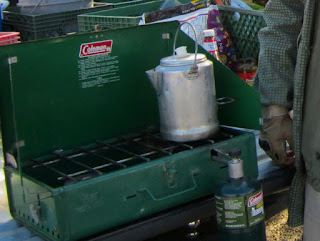 I also met Maricopa's newest K-9 officer and a fellow University of Pittsburgh alumnus, who was part of the volunteer staff at the Maricopa Police Department command post at the event. The police were also going to process DUI's at that location as part of their holiday enforcement campaign.

The very large Negro (with almost no teeth) that tried to sell me crack a month ago, drove by as I was speaking with the police officers. I told them about this, as the suspicious subject(s) in the gray Buick rolled through a stop sign without completely stopping. The K-9 unit went after him. I'm not sure how that ended. 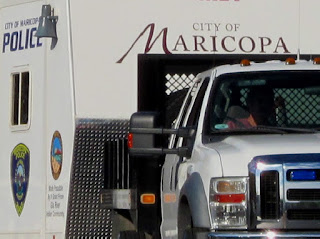 In recent days, I have become the topic of discussion on the Village Voice Media owned Phoenix New times. The New Times has a feature known as the "Feathered Bastard", a blog written by Stephen Lemons. In fact, two posts giving me direct mention were online in less than 24 hours. I'm wondering if it was a slow day, or something. I really haven't done anything especially noteworthy, as of late.

The Senate passed a resolution Thursday night that calls on the newspaper Village Voice “to act as a responsible global citizen” by taking down its “adult entertainment” section of its classified advertising website.

The Maricopa, Arizona-based swastika-lover's been photographed next to Pinal County Sheriff Paul Babeu, demonstrating in support of Sheriff Joe Arpaio and Maricopa County Attorney Bill Montgomery, and now, next to "the Maverick" himself, U.S. Senator John McCain. Full Post 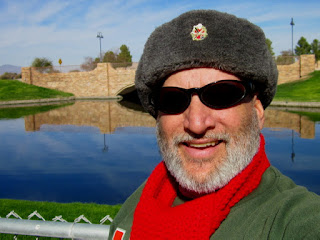 My thoughts as this being a slow news day were because my John McCain encounter was several weeks ago, during the first week of November. The Feathered Bastard was primarily focused on Sheriff Joe Arpaio and how many votes were not counted in the days and weeks following the election. I was seriously beginning to wonder if Maricopa County was ever going to finish counting votes.

I think this comment might be relevant: bob_lablaw96 17 hours ago @lee.murphy75... "Lemons ran out of shit to write about that dumb ass we have for our Shurf, so is just stirring the coals of discontent to see who cares about some chickenshit issue like this."

It's dang encouraging to learn that the National Rifle Association's top propagandist Wayne LaPierre is practically on the same page as Maricopa, Arizona neo-Nazi Harry Hughes regarding what the nation should do in response to the massacre of the innocents in Newtown, Connecticut. Full Post

In the blog post Mr Lemons refers to, I provided very little commentary. Rather than rant about the topic, I posted paraphrases, links to other articles and videos on the subject. I believe Mr. Lemons was trying to further marginalize the National Rifle Association by associating them with other groups. A common tactic used by the left. NRA, the new KKK? 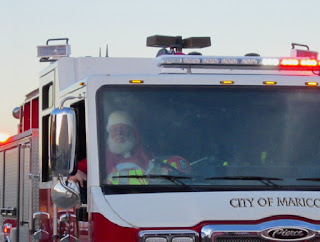 I do believe that prohibition has a pitiful chance of making any difference. After all, heroin, crack and a whole list of dangerous drugs are illegal, but still extremely easy to acquire. Just ask a junkie or anybody in rehab.

I believe some people are coherent enough to see the big picture: bgray59 2 days ago... "If guns are not available to those lunatics who wish to kill and maim people for some twisted logic, they, like the suicide bombers, will use a more effective device like a bomb,incineration device or gas bomb." Absolutely! A few gallons of gasoline and a pack of matches has endless and extremely deadly possibilities in the hands of someone intended on killing.

More guns and less politicians: Politicians lie and manipulate facts, cause more death and grief than any "crazy gunman" could ever do. Simple laws with real consequences might be a deterrent to some, but not all.

“I'm a 9th generation American and patriot (1737). My forefathers served in the Pennsylvania Militia. On June 27, 1781, they were called upon to perform a tour of duty. I'm still protecting freedom and securing the border, 275 years later.” --Harry L Hughes III
Posted by Harry L. Hughes III at 10:28 AM 2 comments: