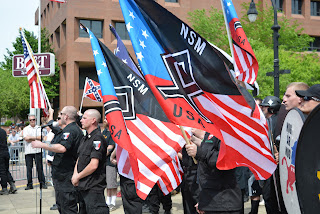 On Friday, April 28, 2017, the National Socialist Movement held its annual National Meeting in eastern Kentucky, on secluded private property. Along with fellowship and educational seminars, a charity event food drive was organized. Also in attendance were other Nationalist Front member organizations and supporters, including the Traditionalist Worker's Party, League of the South, Council of Conservative Citizens, the America First Committee, Vanguard America, Alt-Right personalities, such as The Right Stuff's Mike Enoch and many others, too numerous to mention, came to join ranks. This year's attendance was record breaking.

During the meeting, NSM Commander Jeff Schoep commemorated the first anniversary of the Nationalist Front, with a speech that solidified our loyal association with the various allied nationalist and pro-white groups. The days of petty bickering over symbols, uniforms, religion and ideologies is over, as we move forward into the 21st century. 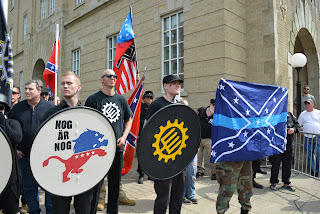 Commander Schoep concluded his speech with, "You are truly the front lines. Thank you." Traditionalist Workers Party leader, Mathew Heimbach spoke of racial unity, as well. The speeches and camaraderie went on into the night. Although it was a challenging task, the NSM Media team recorded the night's events and will be releasing them to the public. My video

Contrary to negative and biased local media reports, the NSM and our allies were very well received, by the people of Kentucky. There's nothing like enjoying some Southern Hospitality. Making no effort to conceal our identities, we made numerous public appearances at restaurants and shopping centers, across the state. Shoppers and commuters stopped, going out of their way, to see and interact with us. Some even asked us for photos, with their families .

On Saturday , we shined our boots and squared our uniforms away, as we prepared to take to the streets of Pikeville. We assembled a convoy of approximately 35 vehicles and wound our way, some 65 miles through rural Kentucky. Local radios stations were giving "convoy reports," as we neared the city. Upon our arrival, we saw lots of local and international media, armed with cameras and microphones. We formed up a marching column and made our way to the Pike County courthouse, where we had our first glimpse at the antifascist resistance. 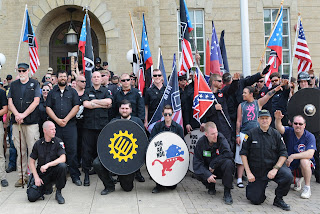 Antifascists, anarchist types and other Communist rabble, who, early on, threatened to shut down our rally, were effectively neutered, by our strength in numbers and partially due to the emergency passage of an anti-mask and hood ordinance, by the City of Pikeville. Other cities, across the country have been plagued with violence and destruction, at the hands of these so called antifascists. This time, the best the counter demonstrators could do is toot horns, blow whistles and sound megaphone sirens, in a pitiful attempt to silence our message of patriotism, racial solidarity and cooperation. Not as much as a water bottle was hurled over the barricades.

Commander Schoep taunted the protesters, telling them that they will never shout down the NSM. As usual, the police officers that lined the street listened attentively to our message, while looking over at the miscreants protesting us, making obscene gestures and shouting hateful comments towards us, as well as the police officers.

Matt Heimbach spoke in support of the working class and the League of the South's Michael Hill stood up for Southern heritage. Sonny Thomas, Mike Enoch and many other conservative speakers took their turn at the podium. 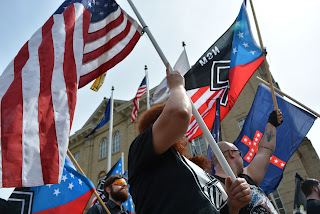 Upon the completion of the rally, we took a few obligatory group photos and departed the venue, without incident or casualties. Once darkness set in, we reassembled at our remote venue, where we engaged in festivities and enjoyed musical entertainment from Paddy Tarleton III and Sacco Vandal. Many were already thinking of the next gathering in November. AAR NSM Media


“Because of the rally and because of a lot of social media wording, reports and rumors out there and also there are now counter protest groups that are coming in looking at the possibility of inciting a riot or violence and to disguise their identity. So for the benefit of public welfare and safety the Commission elected to pass a model ordinance tonight that would prohibit somebody from wearing a mask or a hood in downtown or in the city of Pikeville within certain boundaries.” More 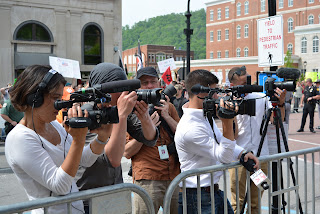 The overwhelming forces of unified nationalists, plus the mask ordinance effectively neutered the antifascists. All they could do is stand there and blow in their Chinese sweatshop produced lead tainted whistles. Appeasing the Marxists, with police stand down orders never worked and in the case of Berkeley, California, only made matters worse. If cities and municipalities take a law and order type approach, they'll not have to be concerned with these terrorists burning their cities. In Pikeville, there was zero property damage and only one protester arrested.

The society that separates its scholars from its warriors will have its thinking done by cowards and its fighting by fools.” – Thucydides
Posted by Harry L. Hughes III at 1:28 PM 2 comments: