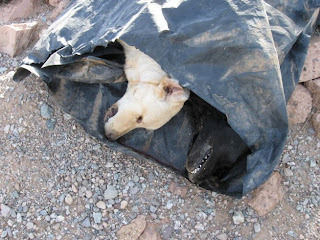 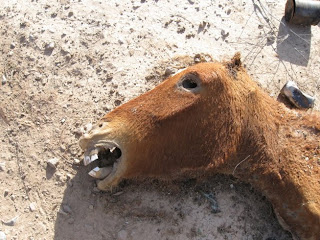 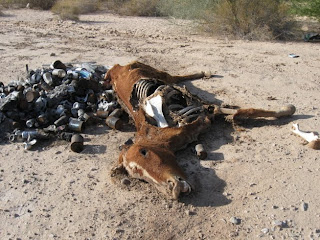 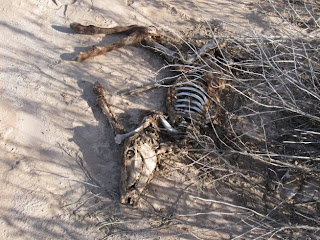 This blog is for all of you pet and animal lovers out there. You really need to know what is happening just a few blocks away from your homes. I want you to know that many of your friends, relatives and neighbors are some of the lowest forms of life on Earth. This discovery really pisses me off. Read on and you will see why I think this way.
During one of my hikes/illegal alien patrols in the wash just north of Teel Rd. and west of Warren Rd, I discovered a foul stench in this wash littered with dead animals. Included in this morbid smorgasbord were dogs, sheep and horses in various states of decay. Many of these creatures were at one time beloved pets that once belonged to people that live in this(my) neighborhood. That nice friendly couple or family next door whose animals suddenly disappeared, may very well have been involved in this repulsive act.
When I saw that dead horse laying out in the wash with a pile of garbage, I thought of the Bonefield family across the street from my home. As you may recall from one of my previous blogs, I watched their horse die a slow death out in the blistering sun last summer.
It disgusts me to see so many of these animals tossed out with the trash to rot out in the desert. I’m appalled that many of the culprits are people we think of as friendly pet loving neighbors. As far as I’m concerned, they are the scum of the Earth. The so-called Nazi “Death Camp” operators were more humane, neat and tidy than this and are worthy of more respect.
With so many dead things to play with, Ed Gien would love living in western Pinal County.
Edward Theodore "Ed" Gein
August 27, 1906 – July 26, 1984) was an American murderer and grave robber. His crimes, which he committed around his hometown of Plainfield, Wisconsin, garnered widespread notoriety after authorities discovered Gein had exhumed corpses from local graveyards and fashioned trophies and keepsakes from their bones and skin.
After police found body parts in Gein's house in 1957, he confessed to killing two women, Mary Hogan, a tavern owner, in 1954, and Bernice Worden, a Plainfield hardware store owner, in 1957. Initially found unfit to stand trial, following confinement in a mental health facility, he was tried in 1968 for the murder of Worden and sentenced to life imprisonment, which he spent in a mental hospital.
If Gein was guilty of murdering only the person he was convicted of killing, he would not technically meet the definition of a serial killer, though his case influenced the creation of several fictional serial killers, including Norman Bates from Psycho, Jame Gumb from The Silence of the Lambs, and Leatherface from The Texas Chainsaw Massacre.
http://en.wikipedia.org/wiki/Ed_Gein
In a more perfect world, I would like to see these low-life scumbag people laying out in that wash with their eye balls picked out of their skulls just like their pets. They truly deserve it.
.
"Every 30 seconds another American files for bankruptcy after a serious health problem. Every year about one and a half million families lose their homes to foreclosure because of unaffordable medical costs. No one should go bankrupt because they get sick." --Senator Max Baucus
Posted by Harry L. Hughes III at 3:46 PM 4 comments: