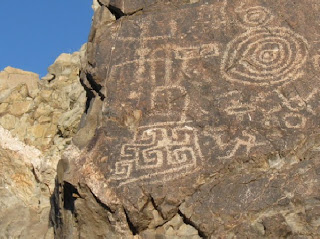 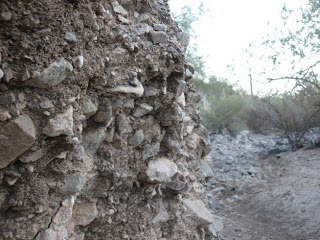 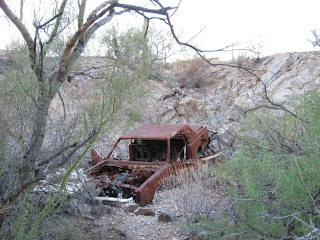 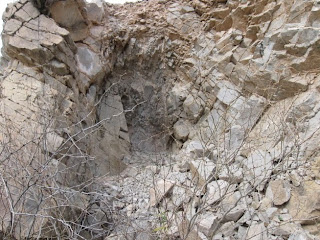 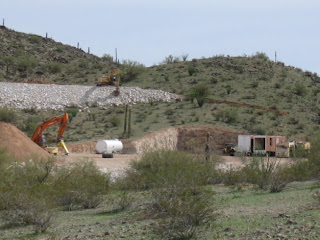 I have decided to proceed with a historic preserva-tion project as a result of development that has become dangerously close to a local archeological site. I have decided to call it the Pinal County Petroglyth Preservation Project(P.C.P.P.P.). My first step was to send descriptions and photos to the local Indian communities as well as to state representatives. The media will be next.
Hopefully, somebody might just listen. If a small invertebrate can stop a dam project, I would like to think I can stop a few careless fools and one greedy developer.
I took another hike past the construction site and into the box canyon today. I noticed some new fence was erected. Native plants were destroyed in the process. Apparently, my presence got the attention of one construction worker. He got off his machine and stared at me while I took pictures.
I am working under the assumption that these people are fully aware of the archeological significance of this area and may resort to any means necessary to protect their interests. I mean that they may be willing to destroy this petroglyth site as a means to their end.
The text of the emails I sent to state legislators and other agencies:
If you and the other elected officials of the State of Arizona have time to decide on a state horse,(I think it should be Mr. Ed because he is smart and can talk.) you may try to find a little time to save a potentially endangered Native American archeological site. Currently, a large construction project is coming dangerously close to petroglyths not far from my home. Vandals and some "not so bright" prospectors are also carelessly damaging this endangered place of historic value.
Shortly after moving to Thunderbird Farms, I came across some petroglyths in a box canyon in the Haley Hills. That was over 17 years ago. This ancient art can be seen in the wash that runs parallel to (censored) Rd. Although this location is off the reservation, I believe it to be of historic importance and it should be preserved and protected. The above mentioned construction project may potentially threaten this site.
In addition to development, it appears that people have been intentionally defacing the rocks in this small canyon. I have included a map and photographs of this site. Hopefully, in the not too distant future, steps can and will be taken to preserve this site.
More of my photographs:
http://www.judykennedy.com/page4/page7/page25/haleyhillspetroglyphs.html
http://vandal49588.blogspot.com/2009/07/todays-patrolfield-trip-haley-hills.html
.
My message to the “amateur prospectors”:
An amateur prospector(s) who doesn’t know shit about geology, has carelessly busted this area up. I happen to have a B.S. degree in geology and am absolutely positive that there are no economically important minerals in this Early Proterozoic Granitic rock. The metamorphics on the other side of the hill have no economic value either. The breccias that lay unconformably on top of these intrusives might make good fill or cement if it was close to a good road. Otherwise the rocks here are worthless. There is no gold there! Don’t waste your time looking or sweating over this site!
If there was gold there, I would already have made some grills or buried it out in my back yard. I had more than 17 years to find it.
"The wilderness once offered men a plausible way of life...now it functions as a psychiatric refuge. Soon there will be no wilderness....Soon there will be no place to go. Then the madness becomes universal...and the universe goes mad."
--Edward Abbey, Monkey Wrench Gang, Chapter 5, p. 63
Posted by Harry L. Hughes III at 5:55 PM No comments: