On this day, 35 years ago... Johnstown, PA is devastated by another flood, and I was there. 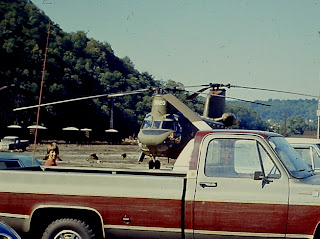 On this day, 35 years ago, one of the deadliest flash floods in U.S. history occurred. During the night of July 20, 1977, approximately one foot of rain fell overnight causing massive flooding and multiple dam failures. In all, eighty-five people were killed in and around Johnstown. No other flash flood since then, has killed more people (in this country).

I lived about 10 miles north of downtown Johnstown on high ground in Vinco. By the way, nothing ever happens in Vinco and probably never will. It's that kind of place and residents like it that way. Earlier that day, I ate birthday cake, opened my presents, goofed off, had supper and watched TV. Hey, I was 14. There was no internet or video games. 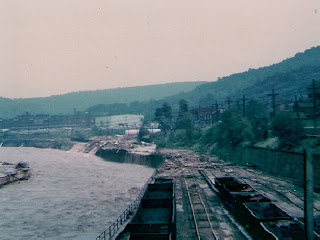 Rain and thunderstorms are common in western Pennsylvania, so most people think nothing of it and go about their business. During the night, the ground became saturated and water began entering the basement through the floor drains. I spent the rest of the night helping out with pushing the water out the garage with a broom. All the while, the thunder, lightning and sheets of rain continued to assault the region. This was by far the most intense storm I've ever witnessed.

The flood was a classic example of "training" -- a series or "train" of thunderstorms that follow the same path, each dumping heavy precipitation over the same location. On this occasion, the first line of thunderstorms put down an outflow boundary. This boundary became stationary along the western edge of the storms' path, across western Pennsylvania from the northwest corner of the state across Johnstown. A pool of cooler air was left behind east of the boundary. Full Story 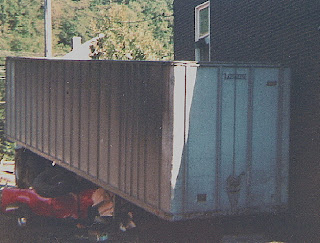 Shortly after daylight, the rain stopped and it turned into another nice summer day. Of course, things were not so ordinary. It became quite clear that disaster struck and things would not be normal for many months to come. Martial law was declared, nation guard troops were deployed and orders were issued to shoot and kill looters.

The National Weather Service estimated that the rainfall was a one-in-five thousand to one-in-ten thousand year event. Of course, if you ever lived in the "Flood City", you know that catastrophic floods occur more frequently. Floods also wrecked Johnstown in 1889 and 1936. Hence, the dubious nickname. Video: 1936

Later that morning, we made our way towards Johnstown. All of the bridges were closed pending safety inspections. Parking in East Conemaugh, we walked over the Conemaugh Franklin bridge and made our way to Woodvale. The water was back inside the river banks, but was still running high. As we walked along Maple Ave., we saw wreckage and destruction everywhere. Cars and trucks were tossed about like toys. There was still water in the street, but the most noticeable thing was the mud. It was everywhere. As we walked by the Woodvale school we could smell the stench coming from the rotting food at the ACME warehouse down the street.

Once In Ten Thousand Years

The dams that surround Johnstown, stretching throughout the Conemaugh Valley, were unsuspecting accomplices in the Great Flood of 1977. They were duped by the instigator - the rain.When they failed, six dams poured more than 128 million gallons of water into the Conemaugh Valley Twenty million gallons were unleashed on Johnstown when the South Fork Dam burst in 1889. Full Story

“The unemployment rate here was in 6 percent to 7 percent levels for the most part during that decade,” Findley said. “For this area, we were really moving along right before the flood. There weren’t any major issues for the economy at that time in terms of setbacks. Pre-flood, in that era, was probably one of the better times of the ’70s.” Full Story

The article goes on to state... "That perfect storm of detrimental economic events led to Johnstown posting the highest unemployment rate in the nation – more than 25 percent – in 1983. " I remember this all too well as I graduated from college in the summer of 1984. 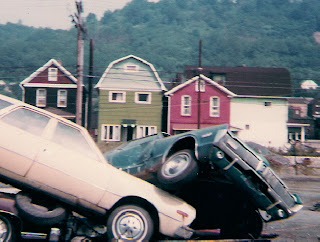 People used to line up for blocks to apply for a job at Burger King. The economy was so bad that one of my classmates was working a part time job as an arsonist. Oddly, he had plenty of work before getting caught. When the economy gets bad, buildings catch fire and cars turn up missing only to be found burnt to a crisp.

On May 31, 1889, a neglected dam and a phenomenal storm led to a catastrophe in which 2,209 people died. It's a story of great tragedy, but also of triumphant recovery. Visit the Johnstown Flood Museum, which is operated by the Johnstown Area Heritage Association, to find out more about this shocking episode in American history. Full Article And More National Memorial  1977 Flood

As for me, college graduation meant finding work and that meant leaving the area. I found work in Tuscon, Arizona as a natural gas pipeline leak inspector. The population of the Johnstown area drastically decreased as there were no opportunities. Our country's habit of off shoring industry and consumer's desire to purchase foreign goods made matters even worse. Doesn't that sound familiar?

Today, lessons I learned from my Johnstown Flood experience are the reason I keep extra water, food, first aid and a bug out bag on hand, just in case disaster strikes. No one can ever be fully prepared, but some preparation is certainly better than none at all, as New Orleans learned during Hurricane Katrina.

“I'm a 9th generation American and patriot (1737). My forefathers served in the Pennsylvania Militia. On June 27, 1781, they were called to perform a tour of duty. I'm still protecting freedom and securing the border, 275 years later.” --Harry L Hughes III
Posted by Harry L. Hughes III at 11:47 AM No comments: