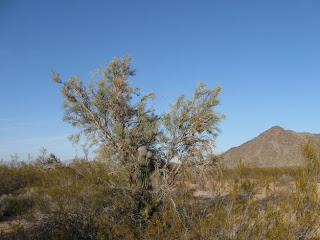 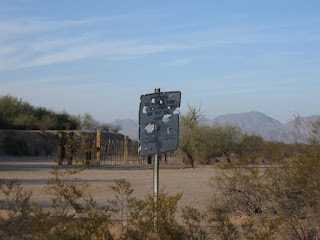 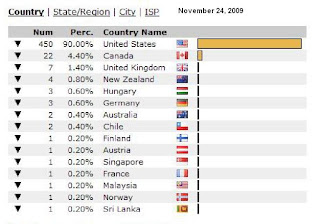 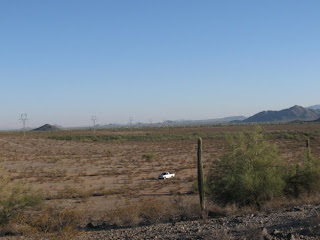 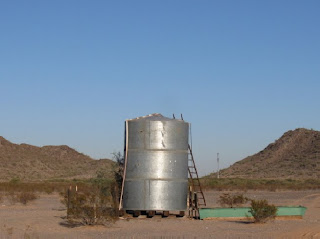 During one of my many illegal alien hunting trips, I decided to go out to the Vekol Valley and investigate the Poverty Flat Tank and surrounding area.
Just over the Pinal County line in Maricopa County, this area is in close proximity to trees, low lying vegetation and potential smuggling routes. I thought it was worth a look.
We parked about ¾ mile north of the tank and walked south. I noticed that there had been no foot traffic there for a long time. After reaching the tank, we walked west and veered north back towards my truck. There were no signs of human or animal activity.
The jeep trails appeared to be well traveled. Somebody was coming out this way for one reason or another. We observed dust approximately three miles to the west of our location. Somebody was out there.
On the way back from this venture, we encountered a Hispanic(Mexican) male in a black extra cab 4x4. He stopped and asked me if there was any quail hunting out this way. I told him that there wasn’t. After more than 16 years of exploring this region, I encountered quail on only one occasion. I really didn’t think he was out there looking for birds. The very ugly Mexican male sitting in the passenger seat went out of his way to avoid eye contact with me. Neither one of them looked like sportsmen.
It’s often difficult to determine who is friend and who is foe. A good rule of thumb is to treat everyone as a potential foe. That “friendly” bird watcher or hiker may in fact be a dangerous criminal. Don’t let your guard down.
Poverty Flat Tank Fishing in Maricopa County, Arizona
Haley Hills Area
The Poverty Flat Tank can be found on the Haley Hills USGS quad topo(graphic) map. Poverty Flat Tank is a reservoir in Maricopa County in the state of Arizona. The latitude and longitude coordinates for this reservoir are 32.9728, -112.2243 and the altitude is 1460 feet (445 meters). More: http://www.fishingworks.com/lakes/arizona/maricopa/haley-hills/poverty-flat-tank/

Public Fishing Allowed? No (not possible to fish here)
Ranking: 0 - No Fishing
Comments: This is a cattle trough next to a galvanized steel tank about the size of a John boat. I don't think there have been fishable waters here in the last 10,000 years.
Trip Date: November 24, 2009
Submitted By: Harry L. Hughes III
I wonder how many people drove way out here with their boats and fishing gear expecting to find a place to fish? Although, cattle have not grazed here for years, there is still water in the tank and trough. Hopefully, nobody will mess it up.

It wasn’t an Arab Congressman that made the following disgusting blasphemy and open hatred of Christians on the floor of Congress “Do not let the forces of evil [Christians] take over to make this a Christian America. “( Senator Howard Metzenbaum, 11/6/86)
Posted by Harry L. Hughes III at 4:58 AM No comments: 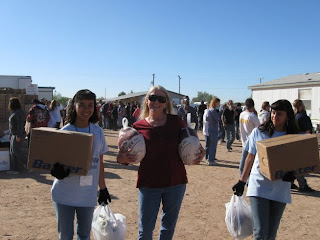 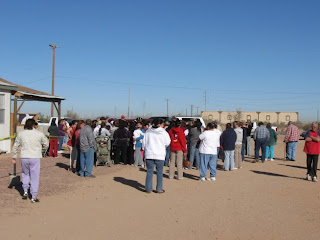 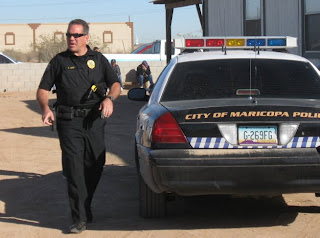 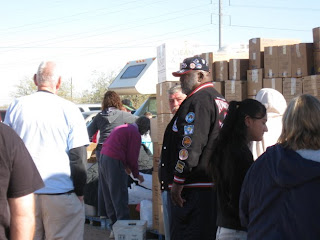 Today was the annual Thanks-giving turkey giveaway at the F.O.R. Food Bank in Maricopa. As was expected, a large crowd showed up during the pre-dawn hours.
I woke up at 2:30AM and was out the door at approximately 3:20AM. I assisted a local senior in the sign up process. People were already lined up when we arrived. Fortunately, it wasn’t quite as cold this morning as it was yesterday during the normal weekly food distribution.
From some of my previous blogs, you may have read about the drunk Mexican, Eva. She was there with the truck she previously used to ram another vehicle at the Farmers Convenience Store. I guess she got it out of impound. Apparently, she didn’t remember that we did not get along. I think she was also drunk off her ass this morning. She uttered some senseless dribble about how her and all of her friend were widows. I’m sure her late husband would have chosen death over being married to her.
More than 100 people had signed up before the sun was up over the horizon. Somewhere between 300-350 turkeys with all the fix’ins were made available to those in need.
The other volunteers appeared shortly after 7:30AM and set up an assortment of boxes and bags which included canned yams, cranberry sauce, corn and green beans. Pie crust, French fried onions, bread, rolls, marshmallows and stuffing mixes were also included in the package.
To my surprise the City of Maricopa sent one police officer to handle crowd control. He appeared to ignore the fact that I was wearing my Sig Sauer P-226 in a thigh rig. Generally, I am better armed than the police.
All in all, the turkey distribution was peaceful and orderly. There was a near stampede last year. The recent adoption of a “numbers system” made this process go a lot more quickly without any conflict.
Francois-Marie Arouet; French writer, deist and philosopher (Voltaire)B. Nov. 21st, 1694-D. May 30th, 1778"
(The Jewish Nation) dares spread an irreconcilable hatred against all nations; it revolts against all its masters. Always superstitious, always avid of the well-being enjoyed by others, always barbarous, crawling in misfortune, and insolent in prosperity. Here are what were the Jews in the eyes of the Greeks and the Romans who could read their books.---Voltaire, Essal sur les moeurs (1756) Tome 1, page 186
Posted by Harry L. Hughes III at 10:58 AM No comments: