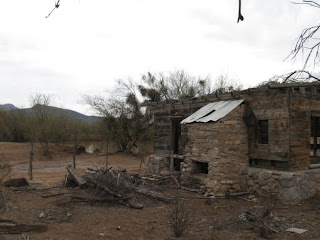 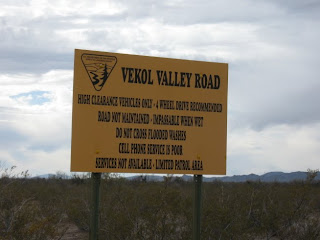 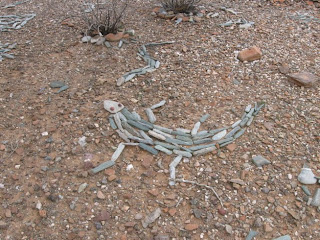 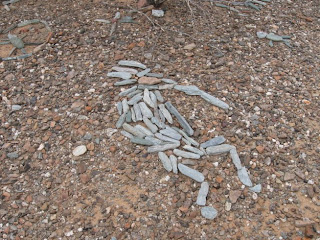 I spent the entire day out on patrol. The weather was cool, breezy and gray. It did not rain. After making a few trips, I discovered that the Vekol Valley south of I-8 is far more interesting than the area north of the interstate.
.
The Sonoran Desert National Monument
.
The Sonoran Desert National Monument contains more than 487,000 acres of Sonoran Desert landscape. The Sonoran Desert is the most biologically diverse of the North American deserts, and the monument exemplifies this desert setting.
http://www.blm.gov/az/st/en/prog/blm_special_areas/natmon/son_des.html
For the second time in less than a week, I spotted the same truck parked in the same place just east of route #8007. There was a male subject sitting in the cab. It appears that he stays there all day and just sits or lays in his truck. He may be a lookout for smugglers or he may be living there or who knows what.
He reminded me of a guy I came across on another occasion. I caught him off guard because he was too busy huffing paint fumes instead of paying attention to me. He got spooked and quickly drove off with some sort of “apparatus” still hanging from his face.
We made our way south(up hill) towards the abandoned ranch and corrals. The road became soft with mud. Last weeks rains and recent traffic created some deep ruts. I had no problem getting through.
More often than not, the other motorists I encounter out here will turn and flee the area when they see me approach. Obviously, they must be doing something wrong when they do that. Today was a little different. A nice white couple was approaching from the other direction and to my surprise, stopped and said hello. They also asked about the road conditions.
A strong military presence was observed in the Vekol Valley. I spotted multiple f-16’s, a low flying A-10 Thunderbolt and a Cobra helicopter early in the afternoon. Although it didn’t happen today, aircraft sometimes go out of their way to “buzz” people on the ground.
Perhaps, the most unusual encounter today, was a small patch of ground off route 8007C where somebody artistically arranged rocks into “Native American style” animal and human forms. They appeared to have been there for some time and was surprised that they were for the most part undisturbed. A group of people commonly know as “New Agers” have a thing for arranging rocks on public lands in Arizona. It’s unknown who created these figures.
$200 Billion dollars a year in suppressed American wages are caused by illegal aliens. They will work for less pay, thus driving down wages for citizens.
Posted by Harry L. Hughes III at 4:58 AM No comments: 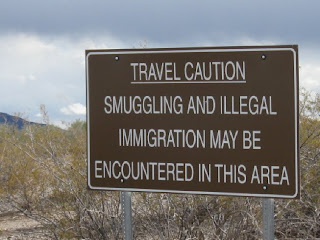 Despite millions of American citizens enduring lengthy periods of unemploy-ment and our economy on the brink of collapse, our elected non-representatives want to open the immigration floodgates some more. We should never ever reward unlawful behavior. Crossing the border without papers is illegal.
.
We could expect this from Congress because they are in reality, a bunch of criminals working(conspiring) under the color of authority. They, for whatever reason, want more uneducated and unskilled people flooding our country and bankrupting our welfare system. We’re broke and there’s no work here. Close the damn door! It’s that simple.
Senate Leaders Vow Amnesty Next! (From Numbers USA)
Last month, the U.S. economy shed 85,000 more jobs. Unemployment stands at more than 15 million. Sound like a good time for an Illegal Alien Mass Amnesty? Not to me, either. That's exactly what the leaders of the Senate's Judiciary Committee promised at a January 11, 2010 meeting with the U.S. Chamber of Commerce, the AFL-CIO, and various ethnic and pro-amnesty groups.
Senate staffers told the open borders folks that Sen. Schumer (D-NY) and Sen. Graham (R-SC) are going to shove an Amnesty to the top of the Senate agenda as soon as they pass the health care bill.
Recent events may slow hemorrhaging
I’m hopeful that the election of Scott Brown(R-MA) will help with controlling or at least slow the damage Democrats(Marxists) are inflicting on this country. Massachusetts is one of the most liberal states. Brown rode a wave of voter anger to defeat Martha Coakley who had been considered a “sure thing” until just a few days ago.
Sen. John McCain compared Brown's win to the Revolutionary War's "shot heard 'round the world" in Concord, Mass., in April 1775. McCain said the message was clear: "No more business as usual in Washington. Stop this unsavory sausage-making process." I can only hope that this vote will serve as a wake-up call to the politicians that occupy all levels of government.
O’Odham Solidarity Across Borders Collective
O’Odham Solidarity Across Borders Collective is made up Akimel O'odham andTohono O'odham youth who are pressing the attack against the ongoing colonization of our traditional lands (i.e. U.S./Mexico Border policies)
http://www.oodhamsolidarity.blogspot.com/
Note: In view of the events at the January 16, 2010 immigration march in Phoenix, this “collective”(a Marxist/Communist term) probably won’t be so friendly with the “anarchists”.
Field work: What criminal activity I discovered. . . .
.
Tohono O'odham is an Indian reservation that borders Mexico. Many tribal members capitalize on illegal immigration. They hide illegals and arrange for their transport to Phoenix and across the USA. This is how they make money.
.
I had a rare opportunity a few years ago to visit one of these "safe houses" and observe human smuggling as it happened. This place was just a few miles east of Sells, AZ. The home was in poor shape, but had a nice view of Kitt Peak. There was no door in the doorway and a mattress was resting outdoors on milk crates near the entrance.
.
Mexicans would cross the border, make their way to this house and hide in the back room which had a dirt floor and was made with ocotillo sticks with mud packed between the spaces.
Once a load of "wets" was ready, they would get picked up in a van and driven to Phoenix by way of Stanfield and Maricopa. These Mexicans would pay $300-400 for this ride.
I decided to call this place, "The Wetback Hotel"
.
During my visit that lasted an entire Saturday afternoon, I saw a couple dozen illegals show up.
.
To top off my day, a red Nissan PU pulled up and three very large and very drunk Indians rolled out of the truck and passed out on that mattress. What a sight to see! You can’t get this at a movie or a Vegas show.
.
On my way home, I saw that one of the vans that picked up the "wets" broke down south of Stanfield not far from a Border Patrol observation post. Hopefully, those tired weary illegal aliens enjoyed their US taxpayer funded bus ride back to Mexico.
.
I feel a sense of satisfaction when I see that white and green Border Patrol vehicle parked on the shoulder and a group of Mexicans sitting in the dirt with their hands on top of their heads.
.
I would be rather disappointed if I just spent $400 for a 50 mile ride just to get stuck out in the middle of nowhere on a 100 degree day with the Border Patrol breathing down my neck, yet those guys will probably be back as soon as they get more money.
Ultimately, the individual(a career criminal) that invited me to this inside look into a human smuggling operation found himself getting caught and was sentenced to prison. His current whereabouts are unknown to me.
Photo: “Welcome to Sanoran Desert National Monument” A warning sign tells us how illegal aliens and drug smugglers have made national parks, monuments, wilderness and recreation areas potentially dangerous places for U.S. Citizens to visit. Instead of enjoying yourself, watch your back!
Say NO to amnesty, say YES to saving America Billions of dollars by DEPORTING illegal aliens and protecting OUR Borders! America First!
Posted by Harry L. Hughes III at 10:22 AM No comments: