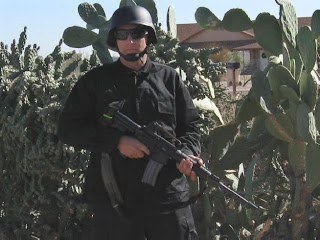 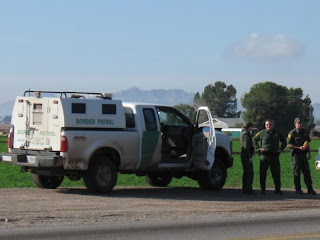 Armed robbery, high speed chases and human smuggling have become everyday activities in and around Maricopa, Arizona. The Federal Government’s blind eye towards securing the Mexican border and the weak administration of justice only encourages more criminal activity.
It’s time for the citizens to step up and get involved. I firmly believe that the re-establishment of “vigilance committees” would greatly reduce crime in Maricopa. Quit hiding in you homes and take back your streets.
In neighboring Maricopa County, criminal Mexicans simply cry “racial profiling” and file lawsuits against Sheriff Joe Arpaio when they want to beat the rap. I’m sure the same defense will be appearing in Pinal County soon. I would prefer to call it “criminal profiling”. According to the FBI, minorities commit 80% of the crime in the US.
Based on the stories I see on the evening news, the people of Phoenix are literally afraid to walk out of their homes because they are afraid of getting murdered, robbed or raped. From what I see, Maricopa is turning into a “mini-Phoenix”.
If minorities want to be treated as “equals“, perhaps they should act like civilized human beings instead of savage beasts. As we already know, these people like to call themselves “victims” and pull the “race card” every time they get caught. They are not victims. They’re scum!
.
Political prostitutes and misinformed liberals continue to buy their lame justifications for criminal behavior. Maybe they will change their tune when somebody they know becomes one of those 25 Americans killed by an illegal alien each and everyday in this country.
Recent incidents from the Pinal County Sheriff’s Office:
100208133 ASSAULT ROBBERY, KNIFE, STREET
Incident Address : 49000 BLK OF W MAYER BLVD
MARICOPA AZ
Time Reported: 17:59Time Occurred between: 17:58:06 02/08/10 – 17:59:10 02/08/10
Cad Info: RP SAID A GUY CAME OVER AND PULLED A KNIFE ON HER HUSBAND NO INJURIES THE TWO GUYS LEFT WALKING IN THE AREA 2 H/M BOTH SUBJS WEARING DARK CLOTHING RP SAYING THEY WERE PUTTING UP FOR SALE SIGNS UP ON THE PROPERTY AND THE GUY JUST CAME UP AND PULLED A KNIFE AND SAID FOR THEM TO GIVE HIM SOME MONEY POSS WENT TO A HOUSE ACROSS THE STREET
100212075 Robbery ROBBERY(DESCRIBE OFFENSE)
Incident Address : 9000 BLK OF N SALMONSON RD
MARICOPA AZ
Time Reported: 15:21Time Occurred between: 15:21:35 02/12/10 – 15:21:35 02/12/10
Cad Info: RP ADV HER SON WAS HOME HISP MALE ARMED W A 45 SILVER GUN CAME TO THE HOME AND TRIED TO ROB THE HOME.. LSW BLK COAT BLK PANTS DRK SKINNED 5'10 TO 5'11 RP SAID IT HAPPENED ABOUT 1 HOUR TO 2 HOUR AGO SON SAID HE GOT SCARED AND LEFT THE SCENE SUSPECT WAS NOT IN A VEHICLE SUSPECT CAME FROM OUT OF THE WEST IN OPEN LOT WITH FIELD SUSPECT WAS ALONE*
*This was the second armed robbery in my once quiet rural neighborhood in less than a week. It happened in broad daylight! Just as this latest robbery, the first robbery was two blocks away(1/2 mi.) from my home. Armed robbery was almost unheard of until last week.
.
Suspects in both robberies were Mexican/Hispanic. It’s no longer safe to walk out to your mailbox. I suggest that every law abiding citizen in Maricopa arm themselves and be prepared to defend your lives using deadly force if necessary.
Illegal aliens are not nice people coming to this country to simply make better lives for themselves. They are desperate criminals that will stop at nothing to get what they want or whatever you have.
100215152 Vehicle Pursuit OTHER TRAFFIC INCIDENTS
Incident Address : N AMARILLO VALLEY RD & W PAPAGO RD
MARICOPA AZ
Time Reported: 20:37Time Occurred between: 20:36:50 02/15/10 – 20:36:50 02/15/10
Cad Info: FTY. ADV MPD TO STOP 2ND VEH. ADV BP. ADV AKCHIN SEVERAL RUNNING NE BACK TOWARDS 347. BP CALLED AND WILL CALL BACK. C4. BP IS NOT AVAILABLE. REQ 926 WHI 4 UP. 926 19 ETA DRIVE TIME FROM CG

100215173 Suspicious Person/Circumstance SUSPICIOUS PERSON
Incident Address : 44000 BLOCK OF W HIGHWAY 84
MARICOPA AZ
Time Reported: 23:00Time Occurred between: 23:00:00 02/15/10 – 23:00:00 02/15/10
Cad Info: OCCURRED 10 MIN AGO. RP SAW 6-8 UDA’S STANDING TO 1/8 MILE TO THE WEST OF STORE ON SOUTH SIDE OF ROAD. RP SAW 2 WITH BACKPACKS. RP NOT REQ CONTACT. RP THINKS THEY WERE WAITING FOR A RIDE. RP HAD HEARD THEY MAY HANG AROUND BEHIND WATER TOWER
.
Sheriff's log courtesy of: http://maricopa360.com/
Maricopa City Council Regular Meeting, February 2, 2010:
Consent to Apply for Grant. The Mayor and City Council shall discuss and possibly take action on approving a request by Grants Manager Mary Witkofski for Council to direct staff to submit a grant application and complete all necessary paperwork to the Arizona Department of Homeland Security, Operation Stonegarden for overtime, special equipment and mileage reimbursement to work in partnership with Border Patrol concerning human smuggling in an amount not to exceed $520,000 and designate City Manager Kevin Evans to execute all necessary documents to complete that application process.
http://cityofmaricopa.granicus.com/MinutesViewer.php?view_id=2&clip_id=214

Illegal aliens(UDA’s) that run from the police and Border Patrol are endangering the lives of citizens and law enforcement. Desperate people will resort to extreme measures to avoid apprehension. In other words, they are perfectly willing to kill YOU in order to get away.
Three million dollars a day is spent to house illegal aliens in our corrections systems.
Posted by Harry L. Hughes III at 10:54 AM No comments: