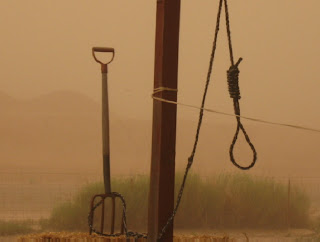 Us patriotic Americans that have a tendency to stand up for our rights and voice our opinions are potentially in big trouble now. Thanks to John McCain and Joseph Lieberman, we have one more reason not to trust our government. Guess who is not going to get my vote for Senate this November?
I’m sure that my voting against the MUSD#20 budget override along with being a resident of Thunderbird Farms will make me an official dissenter, subject to detention under this proposed legislation.
Dissenters To Be Detained As “Enemy Belligerents”?
Since the establishment media is convinced that tea party members, 9/11 truthers, libertarians, Ron Paul supporters, and basically anyone with a dissenting political opinion is a likely domestic terrorist, they should be celebrating the fact that a new bill would allow the government to detain such people as “enemy belligerents” indefinitely and without trial based on their “suspected activity”.
The “Enemy Belligerent, Interrogation, Detention, and Prosecution Act of 2010,” introduced by Senators John McCain and Joseph Lieberman on Thursday with little fanfare, “sets out a comprehensive policy for the detention, interrogation and trial of suspected enemy belligerents who are believed to have engaged in hostilities against the United States by requiring these individuals to be held in military custody, interrogated for their intelligence value and not provided with a Miranda warning.” . . .
http://www.prisonplanet.com/dissenters-to-be-detained-as-enemy-belligerents.html
Full text of bill(PDF):
http://assets.theatlantic.com/static/mt/assets/politics/ARM10090.pdf
S.3081 - Enemy Belligerent, Interrogation, Detention, and Prosecution Act of 2010
A bill to provide for the interrogation and detention of enemy belligerents who commit hostile acts against the United States, to establish certain limitations on the prosecution of such belligerents for such acts, and for other purposes.
http://www.opencongress.org/bill/111-s3081/show
“The fascists of the future will be called anti-fascists.”– Winston Churchill (1874-1965)
According to this draconian bill, a person/patriot doesn’t even have to pose a threat to be arrested and interrogated. The detainee can be simply determined to be of “potential intelligence value” or fall under the vague and overwhelming mandate of “such other matters as the President considers appropriate”.
This last designation will give Obama “dictator-like” powers to have any American Citizen detained, and interrogated for just about any reason. Those of you that voted for “change” don’t know what’s coming. This law basically rescinds the U.S. Constitution. Due process will be wiped away with the stroke of a pen.
In other words, this is a blank arrest warrant. The East German Stazi and Joseph Stalin would certainly be proud.
Senator John McCain’s own words
Mr. President, I rise to introduce legislation that sets forth a clear, comprehensive policy for the detention, interrogation and trial of enemy belligerents who are suspected of engaging in hostilities against the United States. This legislation seeks to ensure that the mistakes made during the apprehension of the Christmas Day bomber, such as reading him a Miranda warning, will never happen again and put Americans’ security at risk.
http://spywitnessnews.org/content/senator-mccain-enemy-belligerent-interrogation-detention-and-prosecution-act-2010
Remember, safety is only an illusion(just like democracy). Laws will not ensure that Americans will be safe. We never have been safe and we never will as long as we continue with our current foreign policies. As long as we back Israel and support Zionism, every American on this planet will continue to be a target.
The European and American warmongers succeeded once again in befogging the sound common sense of the masses, who can never hope to profit from this war, by conjuring up false pictures of new hope. Thus, finally, under pressure of public opinion, as formed by their press, they once more managed to induce the nation to continue this struggle. --Adolph Hitler, Berlin Reichstag, May 4, 1941
Posted by Harry L. Hughes III at 8:23 AM No comments: 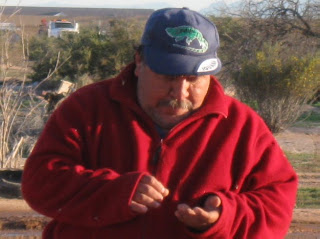 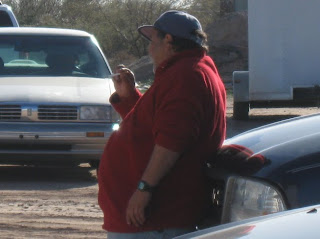 Every once in a while I come across somebody I really dislike. Jorge, pronounced “or hay“, Alvarez is certainly one of those individuals. I thought it appropriate that I inform my readers as to what happens every Monday morning at the F.O.R. Food Bank in Maricopa, AZ. Beware, the truth can be very ugly.
In the 25 years I’ve lived in Arizona, I have yet to meet an honest, trustworthy or respectable Mexican. From what I have personally observed, those often dismissed stereotypes of them being fat lazy thieves are actually true. Jorge is what I would classify as a “typical Mexican“. As far as I’m concerned, they are nothing but lowlife greedy parasites that prey upon everyone around them.
His physical appearance, which I find repulsive and disgusting, matches his personality perfectly.
Although, only one food box per household is the policy, Jorge cheats the system because he is dishonest. He brings his wife who uses a different last name. This is very common. Many Mexican families double, triple and even quadruple dip at the F.O.R. Food Bank. This is made possible because they all have different last names. Talk about dysfunctional families.
On one occasion some months ago, F.O.R. volunteers were passing out towels, wash rags and dish cloths. A petite woman was given one. She accidentally dropped it and Jorge selfishly swooped in and grabbed it. This animalistic act reminded me of those news videos from Haiti and Somalia where the men would violently grab food and water from women and children. I really wanted to put my boot to this disgusting pile of fecal material‘s head, but didn’t want to scuff my shine with his face. He definitely had it coming.
In recent weeks, F.O. R. volunteers have been putting out dented and damaged canned goods. Instead of sharing, Jorge selfishly and rudely pushed is way in and tried to grab every single can. He didn’t even know what he was grabbing. The selfish s.o.b. wanted them all.
Last week, he grabbed at least 30 cans, put them in a dog food bag and carted them off to his truck. I hope all of those cans of corn and carrots give him the shits. In all probability, he won’t consume any of them. He’ll probably sell or trade them for beer or some other libation or vice.
Respect is something you must earn. Obviously, Jorge could care less about having an ounce of respect for himself or anybody else for that matter. There are many Mexicans that come to the F.O.R. food bank that are just like Jorge. It’s unfortunate that these disgusting individuals taint the positive work the F.O.R. volunteers perform.
Nobody can tell me that these “Mexcrements” are nice people just like us. What I see are savage animals. If you don’t believe me, come and see for yourself.
"A racist is a man who believes in history, genetics, and his eyes!" -- Tom Anderson, Article: "Tom Anderson's Straight Talk on Equality and Race," The Citizen, Jackson, Miss., June 1970.
Posted by Harry L. Hughes III at 11:42 AM No comments: