Sheriff Arpaio endorses Bill Montgomery and guess who gets involved? 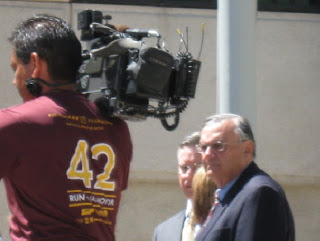 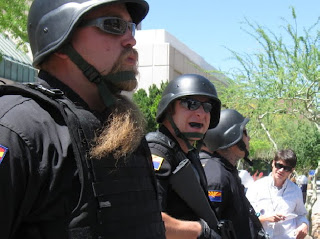 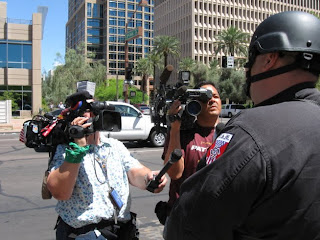 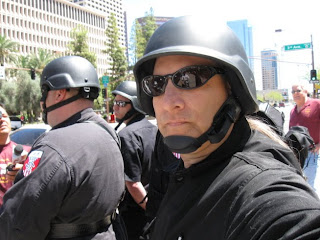 I got up bright and early this morning so I could observe Maricopa County politics in action. These "little actions" we undertake, have a way of taking on a life of their own and generating media attention. As expected, we turned an hour of our time into a buzzing hive of activity on the internet and on TV news broadcasts. After a 12 hour long day out in the field, I arrived home just in time to watch myself on the Channel 3 news.

Political Insider: Thanks, but no thanks. . .

Maricopa County Attorney candidate Bill Montgomery got a dose of un-wanted support when a handful of neo-Nazis showed up at Montgomery’s news conference Friday morning claiming they were there to back Sheriff Joe Arpaio.

The members of the National Socialist Movement, decked out in riot gear and wearing rifles slung over their shoulders, said they were there to “support Sheriff Joe’s candidate for County Attorney,” according to ringleader J.T. Ready.

Montgomery was appalled at their presence and tried to get the men to leave.
http://www.azcentral.com/members/Blog/PoliticalInsider/79888

Upon our arrival, we were told, “This is not that kind of an event.“ Being told to leave was an unlawful order we were not obligated to obey. After all, we were still in the United States of America(on a public sidewalk) where the First Amendment and Second Amendment are still the law of the land. We stood quietly on the sidewalk and exercised our Constitutional Rights. After a few minutes TV cameras and reporters converged on us to ask questions.

The men, who stood silently through the conference, were dressed in black combat gear and helmets and bore both Arizona flag and Neo-Nazi arm patches.
http://www.azfamily.com/news/local/Men-in-Neo-Nazi-outfits-voice-support-for-Arpaio-92559364.html

Some of Joe's neo-Nazi supporters showed up today to back Republican Bill Montgomery, Joe's pick for Maricopa County Attorney. Among the swastika-lickers present in full National Socialist Movement combat gear was none other than the Ernst Rohm of the East Valley, J.T. Ready.

The Republic reported that Ready said he and his fellow SS-wannabees were present to "support Sheriff Joe's candidate for County Attorney.
http://blogs.phoenixnewtimes.com/bastard/2010/04/phoenix_police_chief_jack_harr.php#more

A Steve Lemon’s “anarchist” commenter wrote, “Ok. Last time we anarchists had the thankless job of driving these guys underground, where they've thankfully stayed for the last six months.” This couldn’t be further from the truth. We’ve been very busy with numerous demonstrations in California as well as a visit to the synagogue in Chandler that hosted an alleged child rapist. Apparently, the anarchists aren’t keeping up to date with our exploits.

The term Nazi derives from the first two syllables of Nationalsozialistische Deutsche Arbeiterpartei (National Socialist German Workers’ Party, NSDAP). Members of the Nazi Party identified themselves as Nationalsozialisten (National Socialists), rarely as Nazis. The German term Nazi parallels the analogous political term Sozi, an abbreviation for a member of the Sozialdemokratische Partei Deutschlands (Social Democratic Party of Germany). In 1933, when Adolph Hitler assumed power of the German government, usage of the term Nazi diminished in Germany, although Austrian anti-Nazis used it as an insult.

Very few call themselves Nazi. Individuals have used that name calling technique to dismiss or silence an idea, that they do not want to consider or talk about. I've been called a Nazi many times. I really could care less. While it has been used as a degrading term in the past. I feel it has a good connotation in today's multi-cultural cesspool.

Millions of illegal aliens have swarmed across our undefended borders and the U. S. Government has done NOTHING to protect us.
Posted by Harry L. Hughes III at 12:48 PM No comments: 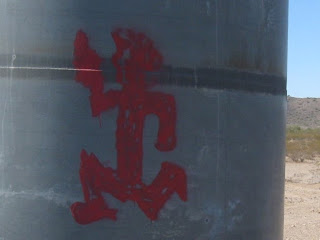 In the wake of Arizona governor Jan Brewer’s signing of strict illegal immigration legislation(SB 1070), Mexico has the audacity to criticize us? The way I see it, Mexico is largely responsible for the border problem. Mexico allows and encourages their citizens to pour over the border in search of free healthcare and welfare.

The people that are coming here have very little to offer. Many of them cannot read and write their own language. They have willfully turned their backs on their own people and abandoned their country.

Mexicans don't care about laws, politics, national or cultural pride. They come as interlopers and usurpers. They're Third World urchins and will do whatever they need to get what they want. That's the mentality we're up against.

MEXICO CITY - The Mexican government is criticizing a tough immigration law approved this week by Arizona legislators, saying Wednesday it could result in rights violations and racial profiling and affect cross-border relations.

Mexico's Foreign Relations Department said in a statement relayed through Mexico’s U.S. Embassy that it views the measure with great concern and that it "could have potentially serious effects on the civil rights" of Mexican nationals.
http://www.azcentral.com/news/articles/2010/04/21/20100421arizona-immigration-bill-mexico-criticizes.html

Perhaps, the United States should mirror Mexico’s immigration policies. Under Mexican law, it is a felony to be an illegal alien in Mexico. Foreigners who are deported from Mexico and attempt to re-enter the country without authorization can be imprisoned for up to 10 years. (Article 118) I think that is a great policy.

As Gov. Jan Brewer signed one of the toughest immigration bills into law Friday,
Hispanic groups and many religious leaders are rising up in opposition, calling
the bill "a slap in the face," "political suicide," and "hateful and motivated
by racism."

Napoleon Pisano, a member of the Mesa Association of Hispanic Citizens, said
even though he was born and raised in Arizona, he is now considered a "person
under suspicion." Pisano, a Mesa resident, is a Vietnam War veteran and said
despite defending the U.S., he now has to prove he's a citizen.
http://www.eastvalleytribune.com/story/153009

As things are today, Mexicans found to be in the U.S. illegally are simply sent back to Mexico with a free bus ride and a bag lunch. While at the same time, a person found to be in Mexico illegally can expect to spend several years trying to survive in a filthy Mexican prison.

Mexico has a radical idea for a rational immigration policy that most Americans would love. However, Mexican officials haven’t been sharing that idea with us as they press for our Congress to adopt the McCain-Kennedy immigration reform bill.

That's too bad, because Mexico, which annually deports more illegal aliens than the United States does, has much to teach us about how it handles the immigration issue. Under Mexican law, it is a felony to be an illegal alien in Mexico.
http://www.citizensforaconstitutionalrepublic.com/waller5-8-06.html

We should use Mexico’s own immigration laws as a model for new immigration policies here in the U.S. It seems to be working for Mexico.

"Arizona acted decisively today to enforce the rule of law and truly secure the border." --J.D. Hayworth, candidate for U.S. Senate, Arizona
Posted by Harry L. Hughes III at 10:19 AM No comments: