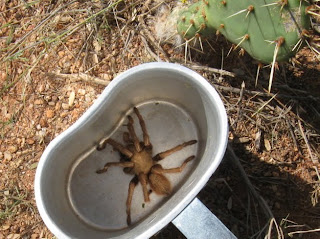 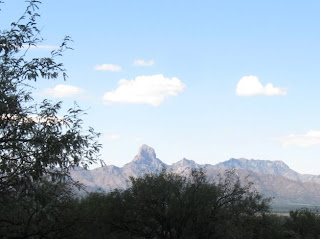 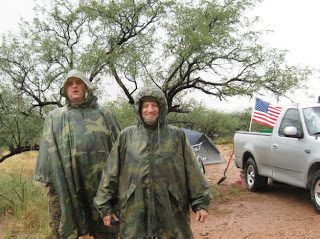 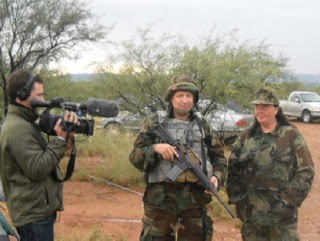 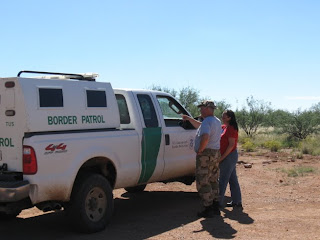 As is most often the case, it rained on my border operation last weekend. I was even more prepared for foul weather than the last time. No sooner was my tent up, when the thunder and lightning delivered a downpour. Despite the weather, our chef prepared a delicious beef brisket and mashed potatoes. The weather finally started to clear up at night fall.

As with previous patrols, there was a heavy concentration of Border Patrol in the Buenos Aires National wildlife Refuge(BANWR). Smugglers are really taking a chance if they try to come through this area.

On Saturday evening, we encountered a group of National Guardsmen near the border. They were sporting ACU’s and Air Force insignia. Most of them looked like they were barely out of high school. We stopped and spoke with them for a few minutes and wished them luck before we pushed on. I felt bad for those kids. I'm sure they were bored.

Although the National Guard has been deployed to the border, they are not permitted to engage drug smugglers or detain illegal aliens. They are there only to observe and report. I would be extremely disappointed if I were these kids.

Sunday 17 Oct. 2010, 1:30PM: While Thora, Steve,(the gentleman from Maryland) and
myself were breaking camp, a group of suspicious Mexican male subjects and one white guy parked near our camp. They were in a Dodge extra cab pick up. A vehicle typically used by drug and human smugglers. Two persons walked into the bush while the others waited.

It appeared that they were looking for something or someone. They were not hunters or bird watchers. Upon asking a few questions, they were caught in a lie.

My dog, Bailey rarely barks at anybody. For some reason, she didn’t like these people and strongly voiced her objection to them. It’s been my experience, that dogs are great judges of character. Their instincts are more accurate than human reasoning.

The Border Patrol was promptly notified and they made contact with the subjects further south of our location. The Border Patrol agent stopped by afterwards to thank us for being out there. It's still unknown what these individuals were up to, but their information is now in the system for future use.

Assassins sent to “take out” bandits in Vekol Valley

On May 13th of this year, the US Department of Homeland Security sent out an email to several law enforcement agencies regarding intelligence information they had developed. The information was not disseminated to the general public as it was deemed “law enforcement sensitive.”

Two days ago, the Pinal County Sheriff’s Office was contacted by a local news entity that had the information contained in the email regarding “assassins being sent to take out bandits in Vekol Valley” which is located in western Pinal County. The news entity had confirmed the information through other law enforcement agencies both on a local and federal level.
http://maricopa360.com/?p=9556

This “memo” sat around since May collecting dust while myself and others are out patrolling this area. What about the safety of the recreational users of this public land? It would have been nice to know that assassins were out there along with the drug and human smugglers. I would have brought more ammunition.

PINAL COUNTY, Ariz. -- Mexican drug cartels have plotted to send assassins into Arizona to murder bandits who are stealing drugs from the cartels, according to a U.S. Department of Homeland Security memo obtained by CBS 5 News.

The memo said, "We just received information from a proven credible confidential source who reported that a meeting was held in Puerto Penasco in which every smuggling organization who utilizes the Vekol Valley was told to attend. This included rival groups within the Guzman cartel."

The Guzman cartel is one of the most powerful and dangerous cartels in Mexico.
http://www.kpho.com/news/25397850/detail.html

Oddly, the release of this story comes at a time where Sheriff Babeu is looking for $1 million to fund his border and immigration enforcement team. Since the public is directly at risk, why weren’t they informed way back in May? As much as I support this sheriff, he’s still an elected politician and us citizens are nothing more than pawns.

Border Patrol agents have been ordered out of the major drug smuggling area where we operate by the brass at the Tucson Sector. Complain here: 520-748-3000

“I warn you, gentlemen, if you do not exclude Jews for all time, your children will curse you…” --Benjamin Franklin, Philadelphia Constitutional Convention of 1787
Posted by Harry L. Hughes III at 1:04 PM No comments: