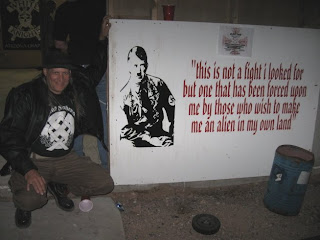 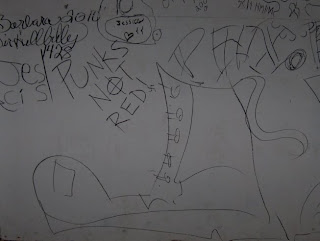 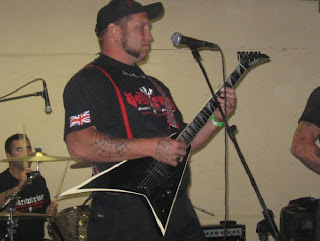 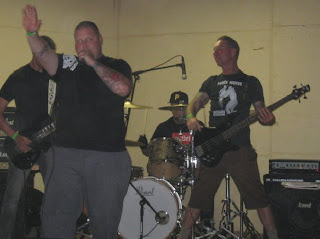 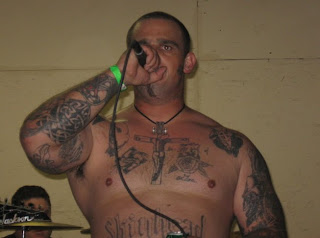 I made my annual trek to the third annual Oi Fest sponsored by the White Knights of America in Tonopah, AZ. I was responsible for bringing the table, chairs and poles to support the NSM Woman’s Division banner. I met up with the rest of the AZ unit and we got the tables and merchandise set up. The NSM Woman’s division raised money by selling t-shirts, CD’s patches and craft items.

I ran into several friends including the representative from the American Third Party and the band Enforcer. Enforcer played at my party last year and have come a long way in promoting their careers since then.

This was the first time in three years that I did not have contact in the form of a “routine traffic stop” with the Maricopa County Sheriff’s Office after leaving the event. Apparently, law enforcement had better things to do.

The White Knights of America is a group of proud men and women who are fighting against the anti-Nordic politics, policies and laws which are being forced upon us as the world is being assimilated into a one-world order. The one-world order philosophy is to create one Race, class, religion, penal code and school of knowledge under the false guise of equality, prosperity, law, justice and order. The true agenda of this one-world conglomerate monster is not for the advancement of humanity, rather it is a plot to control and dominate the masses by a very concise elitist class.
http://www.whiteknightsofamerica.com/
http://www.whiteknightsofamerica.com/id73.html

Sand Land continues to serve as the spot to be for neo-Nazis, white supremacists, and plain ol' racist nativists to party down. Just check out the above video for the 2009 Oi Fest, held yearly in Tonopah, Arizona, and sponsored by the local, pseudo-Klansters of the White Knights of America.
http://blogs.phoenixnewtimes.com/bastard/2010/09/neo-nazi_arizona_upcoming_whit.php

A suspicious package with swastikas written on the envelope was mailed Thursday to the Tucson office, where about a dozen staffers work. Upon inspection, it was found the package contained a white powder authorities later determined to be toxic, said Grijalva campaign spokesman Adam Sarvana.
http://www.azcentral.com/news/election/azelections/articles/2010/10/21/20101021arizona-grijalva-office-toxic-substance-politico.html#ixzz13IFXVLqT

It wouldn’t surprise me if the knuckleheads that perpetrated this crime drew the swastikas backwards. They often do.

Meanwhile, down in Mexico. . .

CIUDAD JUAREZ, Mexico - At least 13 young people were shot dead and 15 wounded in an attack on a house party in Ciudad Juarez, the second such massacre in less than a week in the violent city bordering Texas.

If they only had more parties like this, we would have less Mexicans bringing their problems to the United States.

Reminder: Mid term elections are on November 2, 2010. Don’t forget to go out and exercise your right and duty by voting.

"This is not a fight I looked for but one that has been forced upon me by those that wish to make me an alien in my own land”
Posted by Harry L. Hughes III at 4:33 PM No comments: