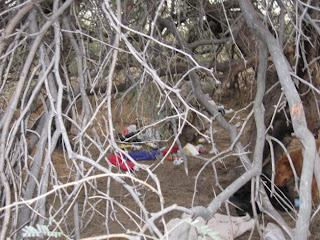 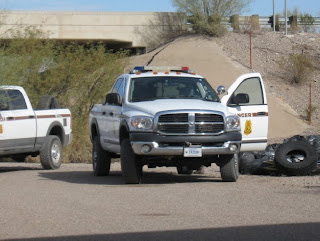 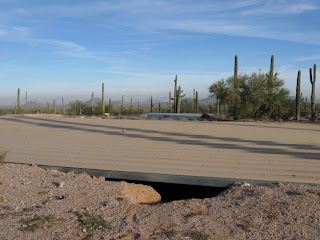 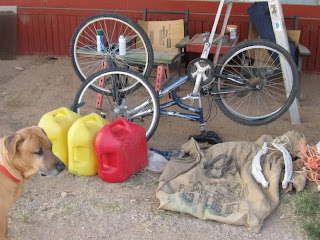 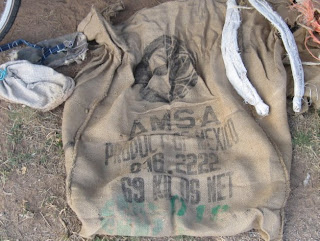 After a long patrol during the weekend, we decided to return to the Sonoran Desert National Monument again on Tuesday. Armed with rifles and trash bags, we picked up litter just south of Interstate 8 and east of Smith Road. Included in that litter were blankets, backpacks, cans, Carl’s Jr. bags and wrappers.

While rummaging through illegal alien backpacks, I discovered papers with phone numbers written on them. Perhaps, they will be of some use in tracing the destinations of drugs and/or illegal aliens.

I also picked up a large quantity of aluminum cans. They are fetching $0.60-0.70/lb. these days and I put those proceeds towards gasoline to help cover the cost of these patrols. Every little bit helps.

In reality, we are using the drug smugglers trash and discards against them.

A Special Report on Immigration in Arizona and Around the World

Photos from NSM Arizona's border patrols have been featured as part of a comprehensive immigration feature on AZ Central
http://www.azcentral.com/news/immigration/immigration-index.html#
Click on “Not On My Watch”

From the Pinal County Sheriff’s Office:

Below is a link to a several stories done by Colonel Ollie North for Fox National News. The series is called "War Stories - On the Border." At the bottom of the page click on "7" to watch the story done on both Pinal County and Pima County. The film quality is not the greatest but it is very informative.
http://www.americanborderpatrol.com/

An Arizona lawmaker’s idea to deploy a state-run civilian force on the U.S.-Mexico border could set the stage for a dramatic showdown with the federal government if the Legislature and the governor follow through on it.

Sen. Jack Harper, a Republican from Surprise, said he plans to introduce legislation next year that would create a government-sanctioned militia that would be allowed to patrol the border to observe illegal activity and report it to enforcement authorities.
http://azcapitoltimes.com/news/2010/11/24/harper-proposes-state-sanctioned-militia-to-patrol-border/

While everybody else is doing nothing, we are out in the field doing the job the US Government refuses to do.

The Dream Act: Voting expected to start around 4:30PM

We are winning in Senate & have a chance in House. But your phone calls are still needed to counteract giant barrage of pro-amnesty phoning.

Sen. Olympia Snowe (R-Maine) has just announced she will vote NO!

The pro-amnesty forces' battle plan for being able to get to 60 votes to pass the DREAM Act amnesty always depended on Snowe voting YES.

Snowe said: "Millions of illegal immigrants could attempt to become legal residents as a result of this proposal, according to some estimates, and it is incumbent upon the Senate to ensure our policies never again lead to a situation where we are confronted with upwards of 12 million illegal immigrants residing within our borders."

I suggest you quote Snowe to some of the offices you continue to call today. Capitol Switchboard is: 202-224-3121

"It is revolting that you would post pictures of volunteer Border Rangers with the US Border Guard who are risking their lives fighting the drug cartels as affiliated with gangs who are pushing drugs. But ...I suppose that your racist agenda is apparent for the discerning reader to see in your propaganda piece" --J.T. Ready
Posted by Harry L. Hughes III at 11:54 AM No comments:

Vekol Valley: Tis The Season to Patrol for Smugglers. . . 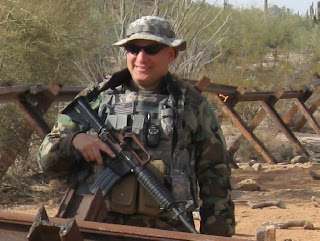 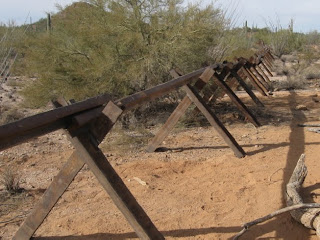 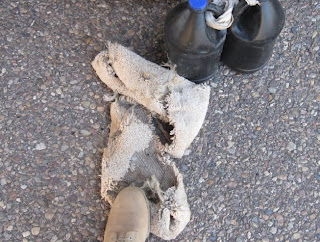 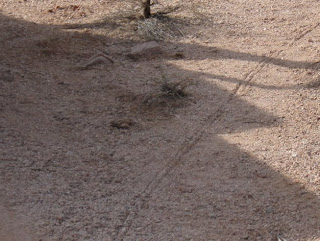 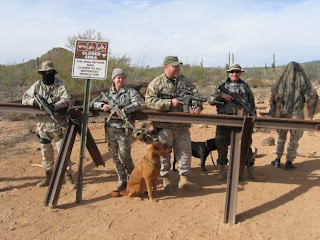 The Vekol Valley is no longer controlled by the Mexican drug cartels. Law enforcement agencies along with citizen volunteers are successfully tripping up the efforts of the bad Mexicans, who are determined to destroy the United States with their poison.

I spent the last three days patrolling the Sonoran Desert National Monument and discovered lots of evidence of drug and human smuggling.

I also recovered some items discarded by these unwelcome invaders including burlap sacks, blankets, “booties” to disguise foot prints and a Mongoose mountain bike. The BLM is also picking up illegal alien trash as well. I was most impressed with the vehicle barricades that are being erected along portions of the Table Top Wilderness area. Vehicles are prohibited in such places, however, drug smugglers could care less about our(US citizens) parks and public lands. They are nothing more than a means to an end.

On Saturday, I came across some curious looking tracks. Somebody crossed into the US with a bicycle and eventually lost the front tire. They continued to travel leaving the distinct and easy to follow rim marks in their wake. Mexicans transport illegal drugs in very much the same way North Vietnamese and Viet Cong transported goods along the Ho Chi Min Trail during the Vietnam War. It works as well now as it did five decades ago.

More than five tons of pot seized in Vekol Valley

The Pinal County Sheriff’s department is reporting that it ended November with a bang, seizing nearly 11,000 pounds of marijuana and apprehending more than 30 illegal immigrants in Vekol Valley, an area less than 20 miles south of Maricopa.
http://www.inmaricopa.com/NEWS/NewsArticleDetails/tabid/99/Default.aspx?ArticleID=9498&&mid1=390

Just imagine how much marijuana, cocaine and methamphetamine did get through and is now on its’ way to a school in your child’s district.

Can you believe this? Wow!

Monday, Nov. 22: Deputies observed a Ford F250 driving with no lights near Interstate 8. The vehicle contained approximately fifty (50) illegal immigrants in the cab and bed of the truck. All of the individuals fled when deputies attempted to stop the vehicle. Six were taken into custody and turned over to U.S. Border Patrol. One of the individuals attempted to escape by jumping into a canal and had to be rescued by deputies.

The need for citizen patrols appear to becoming popular and perhaps, necessary in other countries.

Supporters say the patrols will enable ordinary people to help police carry out their role of protecting neighbourhoods.

But opponents have argued the groups are no more than vigilantes, many of which are being set up in areas with high immigrant populations.
http://news.bbc.co.uk/2/hi/8291187.stm

Regardless of the continent one may be on, illegal immigrants appear to be the root of many problems. I’m not all too surprised as I’ve seen first hand what hordes of illegal aliens can do to an unsuspecting or apathetic country. Simply put, they destroy it.

"We must stop the mass entry of illegal migrant workers because of the very serious threat to the character and future to the state of Israel," --Benjamin Netanyahu
Posted by Harry L. Hughes III at 8:08 PM No comments: