Escaping civilization to the smuggling corridor in Vekol Valley. 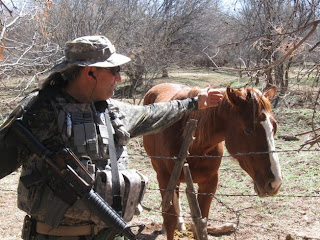 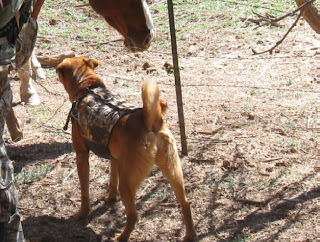 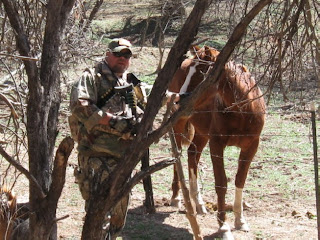 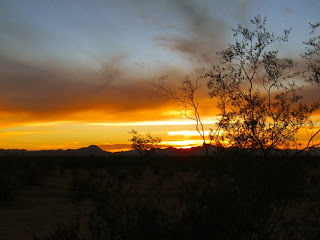 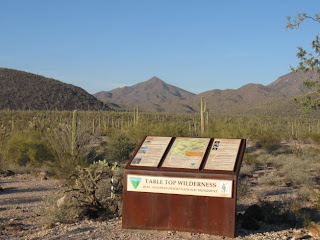 After spending nearly three non-stop days of trying to put the last seven years of my life into a new computer, I decided it was time to get away from civilization. I wanted to be where there were no computers, cell phones and electricity.

I ventured out to the Vekol Valley to enjoy the outdoors and track the ever elusive drug smugglers and illegal aliens. For early March, the weather was perfect. The mornings were a little chilly, but the highs made it into the mid-70's

I reached my destination Tuesday afternoon and all was peaceful. After sunset, I watched the military aircraft drop flares while a couple of helicopters circled the abandoned slaughterhouse a few miles to the north. After all the excitement was over, the cattle and coyotes began to make their noise. To me, nature's sounds are peaceful.

Bailey loves the outdoors and tried to lunge at something in the darkness around midnight. She's getting good at providing camp security allowing me to get a good night's sleep.

I awoke well rested and the coyotes carried on until almost 9:00AM. Not long after, the A-10 Warthogs made several passes along the mountains to the east and south. Later, I heard a very loud machinegun. It was a very cool sound. Maybe it was a 30mm.

PCSO investigating dead body in Vekol Valley
On February 21, 2011 at 9:42 P.M., the Pinal County Sheriff’s Office (PCSO) responded to an agency assist with the U.S. Bureau of Land Management (BLM). A BLM Ranger reported he had located the body of a deceased subject in the desert that appeared to be a possible illegal immigrant. The body was located south of Interstate-8 in the desert area near Vekol Valley.
http://www.copanews.com/Article.aspx?ID=2267
I wonder what took Copanews.com so long to post this news? They had more than a week. Most of us already got the details from other sources.
This dead Mexican happened to have an AK-47. I'm almost willing to bet that he didn't die of natural causes. Perhaps, a gunshot wound? We'll be lucky if the media tells us how he died. Killings in the Vekol will one day be so common that reporting them will be nothing but a waste of time.
Despite being called one of the most dangerous places between Phoenix, the Vekol Valley is still safe for me to get a good night's sleep. . .ALONE!
From the Pinal County Sheriff's log. . .
Now, we have illegal aliens running all the way to Maricopa and they want to wait until shift change. I'm sure they'll be gone by the time they get out there. U.D.A.'s are most elusive when on the run.

110226184 Suspicious Person/Circumstance SUSPICIOUS PERSON
Incident Address : 800 BLOCK OF S LA PAZ RD MARICOPA
Time Reported: 18:44
Time Occurred between: 18:40:42 02/26/11 - 18:40:49 02/26/11
Cad Info: BETW LA PAZ AND RINCON HEADED TOWARDS WARREN. RP SAYS THERE'S 10-12 UDAS RUNNING NB TOWARDS MARICOPA. WILL PROBABLY COME OUT ON SOTOL. CARRYING BACKPACKS, UNABLE TO GET BETTER DESC DUE TO DARKNESS. RP NOT REQ CONTACT, IS AVAIL BY 21. 10-15 OUT. ADVISED BP OF TRAFFIC, SAID THEY HAD RECEIVED A SIMILAR REPORT FROM ANOTHER RP AND ARE WAITING FOR THE NEXT SHIFT TO SEND AGENTS. SUBJTS RUNNING NORTH OF SOTOL BY LA PAZ, SEND BP UP THIS WAY. BP ARE AT LA PAZ & CORANZA. BP ON SCENE. JUST TRACKS
How come they never send multiple units for me? I drive a pickup truck and almost always have an assault rifle? Not once did a deputy respond when the Bonefield's across the street thought I was trying to shoot their horse or throw glass at it. Did they lose their way?
110227075 Suspicious Activity SUSPICIOUS ACTIVITY
Incident Address : S STANFIELD RD & W I-8 EXIT 161 STANFIELD
Time Reported: 11:54
Time Occurred between: 11:52:53 02/27/11 - 11:52:53 02/27/11
Cad Info: JUST AN FYI-- THERE IS A TAN 04 HEAVY DUTY FORD TRK PK WITH 2 MEN SITTING ON THE BACK END WITH ASSAULT RIFFLES. DPS IS SENDING SOMEONE TO C20 THE AREA. DPS REQ UPDATE. DPS ADVS THAT THEY HAVE MULTIPLE UNITS 19 TO THE AREA AND WILL NOT MAKE CTC UNTIL MORE THAN 1 UNIT IS 97. 21 BP AND SEE IF THAT IS THERE VEH OUT THERE I KNOW THEY HAD A TAN IN COLOR PICKUP IN THE AREA AS WELL. BP WILL SEE IF ITS ONE OF THEIR VEHS AND WILL 21 BACK. BP ON THE LINE ADV THIS IS ONE OF THEIR UNITS ON I-8 IN THE TAN FORD AZ/LIC

Every year, around planting season, farms use some sort of bird disruptors that sound very much like shotgun blasts. There are no hunters shooting. Perhaps, they're new to the area? I miss the old days when I could sit on my porch and shoot without sheriff's deputies responding.

110301050 Shooting A weapon NOISE
Incident Address : W PAPAGO RD & N WHITE RD MARICOPA
Time Reported: 07:53
Time Occurred between: 07:46:53 03/01/11 - 07:46:53 03/01/11
Cad Info: 21 RP. SHE HEARS SHOTS BEING FIRED. UNK EXACTLY WHERE THEY ARE COMING FROM. HAPPENS FROM DAWN TO DUSK. HAS BEEN HAPPENING SINCE THE BEGINNING OF FEB. SHE WANTS TO KNOW HOW LONG THEY ARE ALLOWED TO HUNT OUT IN THE AREA. RP SAID HER HUSBAND TOLD HER THAT ITS HUNTERS. BUT SHE IS TIRED OF HEARING THE SHOOTING ALL AROUND THE AREA. PUT THRU TO THE RP. GIVEN 21 # FOR GAME & FISH FOR HUNTING SEASON RELATED QUESTIONS, HUNTERS DISTURBING HER SLEEP.

“Let the corn be all of one sheaf, And the grapes be all of one vine. Lest our children's teeth are set on edge, By bitter bread and wine.” --Rudyard Kipling
Posted by Harry L. Hughes III at 10:04 PM No comments: