Dog at large. . .Cal Bonefield: Too little, too late, again. 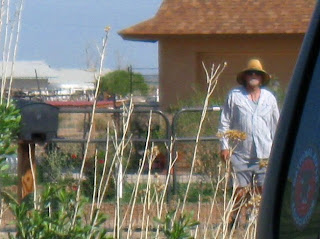 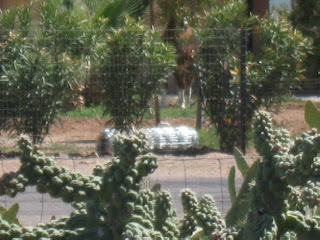 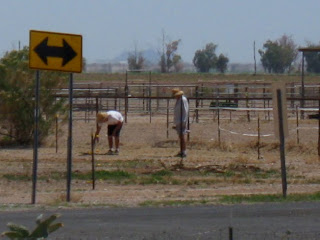 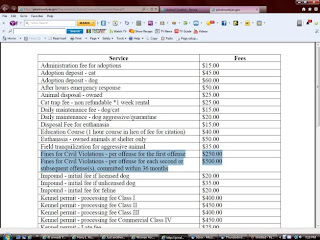 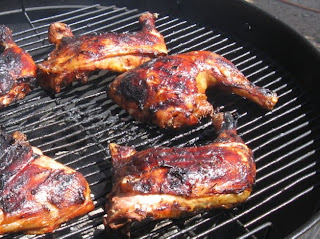 Sunday, March 27, 2011: To my shock and amazement, I observed Cal Bonefield with a shiny new roll of fencing. I was also surprised to see him out there sweating over his attempt at putting it up. It took an incident to generate this long belated action. I suppose he never heard of taking precautions in advance.
This is almost a carbon copy of events that took place in June of 2009. He should have finished the fence back then. Some people just don't learn. As of Monday, he didn't get very much accomplished.
All I want is to be able to walk down my street without being confronted by unpredictable and possibly aggressive dogs. I guess this way too much to ask.
Pinal County Animal Care & Control. . . Section III
A. Public Nuisances Dangerous to Public Health: A County enforcement agent shall enforce the provisions of this ordinance and/or A.R.S. § 36-601 (A) by initiating a case against a responsible person or persons by the filing and prosecution to conclusion of a citation or complaint in a Justice Court or the Pinal County Hearing Office. The County enforcement agent shall elect whether to proceed in Justice Court or before the Pinal County Hearing Office. If the case is initiated in the Pinal County Hearing Office, it shall be a civil infraction for any person to violate the provisions of this section, and the penalty set forth herein shall apply. http://pinalcountyaz.gov/Departments/AnimalControl/Documents/Animal%20Control%20Ordinance.pdf
I'm not so much worried with a dog bite that the prospect of contracting rabies after being bitten. Outbreaks of rabies have increased over the last two years in Pinal and surrounding counties. The more often a pet owner allow his/her pet to roam, the better the chances that that animal could become rabies carrier.
Presumptive Abortive Human Rabies — Texas, 2009
Rabies is a serious zoonotic disease. Recovery has been well documented in only six human patients worldwide (1,2). Five of those patients had received rabies vaccinations before illness; one had not received rabies vaccination but survived infection after prolonged intensive care. In most of these survivors, moderate to profound neurologic sequelae occurred (2,3). In all six survivors, rabies was diagnosed based on exposure history, compatible clinical symptoms, and detection of rabies virus-neutralizing antibodies (VNA). http://www.cdc.gov/mmwr/PDF/wk/mm5907.pdf
From the Pinal County Sheriff's Office. . .
I was walking down the street with a friend and my dog, minding my own business, exercising my Second Amendment Constitutional rights and not breaking any laws.
110326060 Suspicious Activity SUSPICIOUS ACTIVITY
Incident Address : W PAPAGO RD MARICOPA
Time Reported: 10:24 Time Occurred between: 10:20:23 03/26/11 - 10:20:23 03/26/11
Cad Info: 6 MIN AGO. RP ADV MALE AND 101 WALKING ON SIDE OF PAPAGO RD. RP COULD NOT GIVE ANOTHER CROSS STREET. MALE WAS CARRYING A 417 ON HIS SHOULDER AND WEARING CAMOFLAUGE GEAR. 101 LSW WHI SHIRT AND CAPRI JEANS. W/ BLK DOG. NO INJ. RP THINKS IT WAS SUSPICIOUS THAT MALE WAS CARRING A WEAPONS ON SIDE OF THE RD. MPD WAS ADV. NFI
Some people get off calling 911 and wasting officer's time on B.S. calls. Maybe, it makes them feel important? This was certainly one of those situations. I've been carrying that weapon around for 16 years and this was the first time somebody went into "panic mode". 911 is for emergencies. If Patton were alive, he would have slapped that wimp.
Recently a discussion involving firearms and wimps came up on the InMaricopa Facebook page. I made a few comments. http://www.facebook.com/InMaricopa I posted this on my wall: http://www.facebook.com/notes/harry-l-hughes-iii/i-was-walking-down-the-street-and-/193648644007876
Are we raising a generation of nincompoops?
NEW YORK—Second-graders who can't tie shoes or zip jackets. Four-year-olds in Pull-Ups diapers. Five-year-olds in strollers. Teens and preteens befuddled by can openers and ice-cube trays. College kids who've never done laundry, taken a bus alone or addressed an envelope.
Are we raising a generation of nincompoops? And do we have only ourselves to blame? Or are some of these things simply the result of kids growing up with push-button technology in an era when mechanical devices are gradually being replaced by electronics http://www.boston.com/news/nation/articles/2010/09/27/are_we_raising_a_generation_of_nincompoops/
I'm going to make this short. ABSOLUTELY, YES!
"Wanting people to listen, you can't tap them on the shoulder; you have to hit them with a sledgehammer. Then, you'll notice you have their strict attention." --from the movie "Se7en"
Posted by Harry L. Hughes III at 6:46 AM 1 comment: