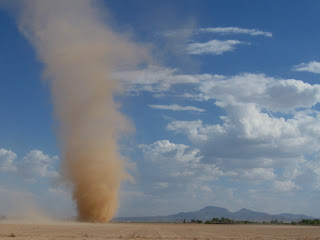 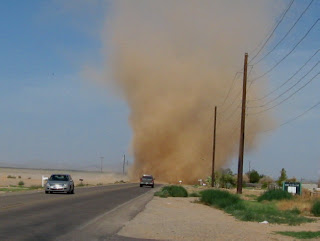 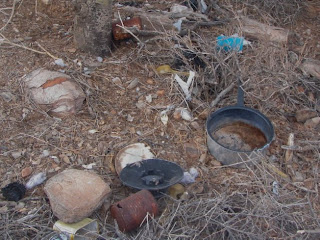 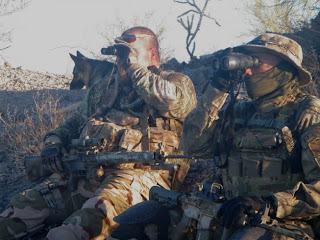 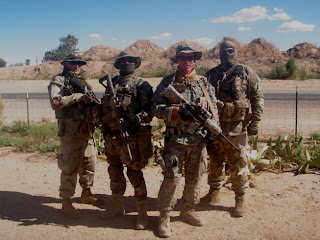 We are about half way through monsoon season in southern Arizona. This is one of our busiest times of the year in the drug smuggling corridors in the Sonoran Desert National Monument. We don't let hot temperatures, high humidity, thunderstorms or flash flooding get in the way of our desert operations. We patrol despite foul weather while others sit at home behind their keyboards and complain about the heat while doing nothing to protect their country.

We conducted a patrol last night and investigated drug smuggler spotter positions overlooking a popular smuggling route. Evidence, including camps, pots, pans and clothing were discovered. Human feces was also present and was rather fresh. We will be returning to this area for further patrols.

Sentry’s were posted near a patrol extraction point. At approximately 9:00PM a Border Patrol unit arrived and inquired as to who we were and what we were doing. As usual, they were cordial. They departed after nearly 30 minutes.

On the way out of the area of operation, two Pinal County Sheriff's deputies approached us from the north. They turned on their red and blues and we stopped. A deputy approached my vehicle and politely asked us what we were doing out there. Apparently, somebody observed and reported a “blacked out” vehicle in the vicinity. It would appear that we were not the only ones that had eyes on this area.

The Obama administration sought to intimidate witnesses into not testifying to Congress on Tuesday about whether ATF knowingly allowed weapons, including assault rifles, to be “walked” into Mexico, the chairman of a House committee investigating the program said in an interview Monday. http://www.washingtontimes.com/news/2011/jul/26/issa-atf-warns-witnesses-to-limit-testimony/

To us citizens, “witness intimidation” is a serious crime punishable by prison time. The corrupt idiots in Washington will do whatever it takes to suppress and oppress people in order for their anti-American agenda to be achieved. I'm surprised nobody has mysteriously turned up dead in a park, yet.

The men informed the Border Patrol agents that they were members of Blue Lights, a border watch group.

"They stated they were not members of the Minutemen, but paid contract employees who 'get the job done' and 'were not just volunteers,'" according to the HIDTA report. "They possessed valid United States Marine Corps identification cards." http://mediamatters.org/blog/201107010013

This is good news. We need US Marines working the border and cartel drug smuggling routes. If we put a couple of divisions out there with orders to “shoot on sight”, our border problem would be resolved in a matter of days.

After a week or two, the greedy bankers will be begging for more bail outs because they will be short on drug money to launder.

In the western United States, both before and after the Civil War, the primary purpose of these committees was to maintain law and order and administer summary justice where governmental law enforcement was inadequate. In the newly settled areas, vigilance committees provided security, and mediated land disputes. In ranching areas, they ruled on ranch boundaries, registered brands, and protected cattle and horses. In the mining districts, they protected claims, settled claim disputes, and attempted to protect miners and other residents. In California, some residents formed vigilance committees to take control from officials whom they considered to be corrupt. http://en.wikipedia.org/wiki/Vigilance_committee

The need for such organizations has returned. Our own corruption plagued government has betrayed us and citizens are no longer content to just sit by and watch their country fall apart. Drugs and criminals have a “free pass” on the Mexican border while citizens are expected to be prey to this bloodthirsty and greedy scum.

Rep. Luis Gutierrez (D-Ill.) was arrested Tuesday outside the White House, during a protest against immigrant deportation, a spokesman confirmed.

Gutierrez spokesman Douglas Rivlin said the congressman was arrested with other pro-immigration advocates after a Lafayette Square rally to protest deportations. http://thehill.com/homenews/house/173677-rep-gutierrez-arrested-outside-white-house-for-second-time

Gutierrez is a traitor! The DREAM Act would also give amnesty to convicted criminals, including those who have committed assault, domestic violence, DUI and document fraud.

Instead of looking out for foreign nationals, Gutierrez should be representing the people that voted him into office. He's clearly refusing to do the job he was elected to do. He should be promptly removed from office, along with the rest of his kind.

Unlike lazy cops who drive by in their air conditioned cruisers, our Border Rangers take the hills from the cartel scouts. the same hills Sheriff Paul Babeu said couldn't be taken. The same hills Paul said he needed $5,000,000.00 more tax payer dollars to patrol. The very same hills he publicly waved the white flag of surrender in the face of our enemies. Support www.USBorderGuard.com –J.T. Ready
Posted by Harry L. Hughes III at 3:28 AM No comments: