Time for some R & R: I enjoyed a long weekend in Las Vegas, Nevada 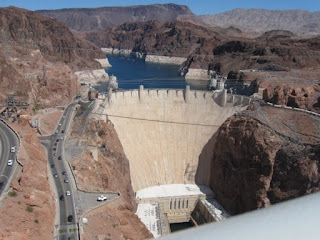 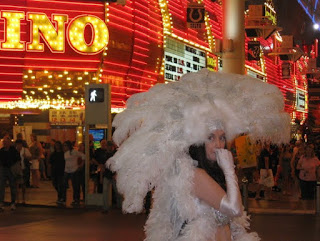 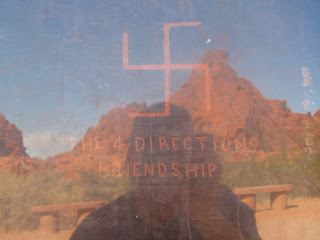 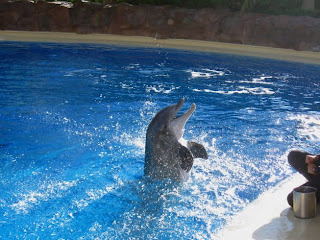 From Thursday to Monday, I took a rare opportunity to get a little vacation time in. I drove up to Las Vegas, Nevada and spent some quality time with my parents. I stayed at the Las Vegas Hilton just east of the Las Vegas Blvd. During my visit, I enjoyed checking out multiple attractions including the ghost town of Nelson, the Hoover Dam, the Pat Tillman Bridge, Valley of Fire State Park and dozens of casinos.

I spent very little time playing the slots. I don't like to gamble much. I did manage to win $30.50 on a penny slot with a $0.09 bet. I promptly cashed out and walked away.

1829: Spanish explorers led by Antonio Armijo search for water on the route to Los Angeles. Probably directed by the Paiute or Ute peoples, the party finds springs in the middle of the desert, and name the area Las Vegas, Spanish for "the meadows."

May 13, 1844: John C. Fremont camps at Las Vegas Springs and makes note of the oasis. His published journal brings more travelers to Las Vegas on their journey west.
http://www.pbs.org/wgbh/amex/lasvegas/timeline/index.html

Hoover Dam, located 30 miles southeast of Las Vegas on U.S. 93, is open daily except Thanksgiving and Christmas. Summer is the busiest season. Visitor Center hours are 9 a.m. to 6 p.m.; the parking garage, 8 a.m. to 6 p.m., fee $7 (cash only). For more information, visit www.usbr.gov/lc/hooverdam.

Hoover Dam straddles the mighty Colorado River, which forms the border between the states of Nevada and Arizona. Considered to be the world’s largest dam and an engineering marvel at the time of its construction in the 1930s, Hoover Dam brings much-needed water and power to the Southwest. http://hooverdam.travelnevada.com/

The role played by the Bureau of Reclamation
In the 20th century, it was the policy of the Bureau of Reclamation to insure that every available drop of water from the various streams and rivers in the dry southwest United States was made available for either municipal, agricultural or industrial use. To this end, Hoover Dam and the dams which followed it, are very successful. Currently the lower Colorado river provides water to irrigate over 1,000,000 acres in the United States and 500, 000 acres in Mexico. Hoover Dam is the center piece to a water conservation and delivery system which provides water to over 22,000,000 people in Arizona, California and Nevada. http://www.sunsetcities.com/hoover-dam.html

I took the one hour Hoover Dam tour. Prior to entering, I had to go t through the security screening. Despite lightening my load, I still tripped off the metal detectors. I had to remove my boots and belt to successfully make it t through the metal detector. This tour took me inside the dam and to the power plant. There are over 9 miles of tunnels inside the complex.

It stands like a sentinel, watching in the wind over one of America's most treasured landmarks, the Hoover Dam.

When the Mike O'Callaghan-Pat Tillman Memorial Bridge opens to traffic later this week, it is expected to become an instant tourist attraction while providing a quicker, safer drive between Phoenix and Las Vegas. http://www.usatoday.com/news/nation/2010-10-18-hooverbypass18_ST_N.htm

Valley of Fire State Park is the oldest state park in Nevada, USA. It covers an area of 34,880 acres (14,120 ha) and was dedicated in 1935. It derives its name from red sandstone formations, formed from great shifting sand dunes during the age of dinosaurs. These features, which are the centerpiece of the park's attractions, often appear to be on fire when reflecting the sun's rays.

Complex uplifting and faulting of the region, followed by extensive erosion, have created the present landscape. The rough floor and jagged walls of the park contain brilliant formations of eroded sandstone and sand dunes more than 150 million years old. Other important rock formations include limestones, shales, and conglomerates.

Titanic: The Artifact Exhibition at the Luxor Las Vegas

If you are considering enjoying some attractions in Las Vegas check out some offers with a GoCard in Las Vegas and you might be able to save money on attractions. Make sure that you want to see what they are offering and if it suits you, you can easily save a few dollars.

Portions of the most famous ship in the world are on display at the Luxor Las Vegas. You get a good look at those artifacts that have been recovered from the ocean floor. The Titanic and all its luxury are on display in Titanic: The Artifact Exhibition. You get a good idea of the class of service that was found on the ship as well as some background information on the passengers and crew on the ship. http://govegas.about.com/od/lasvegasattractions/fr/titanicatluxor.htm

Currently, one get get tickets to three different events for $54.00. I also went to the Aquariums at Mandalay Bay and the dolphin/tiger exhibits at the Mirage. Public transportation made access to these venues relatively easy. When in Las Vegas, expect to do lots of walking. The huge buildings look closer than they really are.

"As for poker, I've stayed away from that, even though when I was in Vegas for Ocean's Eleven, I would get accosted by these guys begging me to play. They just want to take my money. They see me, think "actor" and see some easy money." --Matt Damon
Posted by Harry L. Hughes III at 11:37 AM No comments: