Despite Government numbers and media reports, there are still plenty of illegal aliens to remove from western Pinal County and Maricopa, AZ 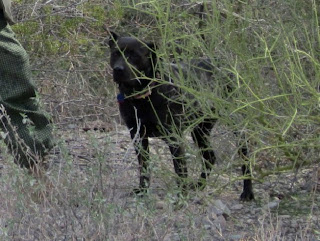 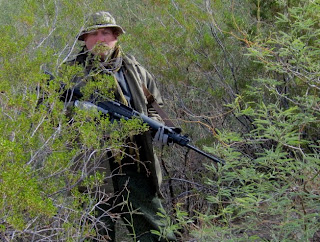 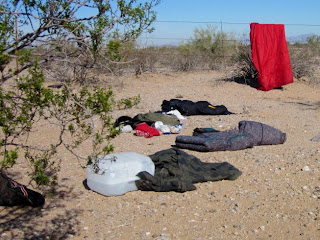 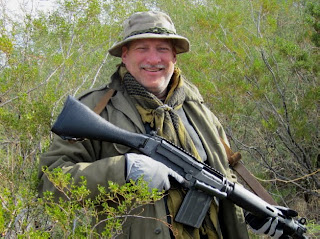 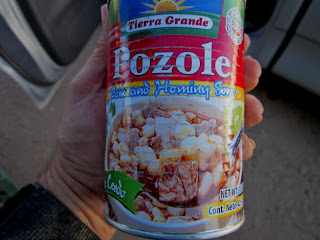 Although the government via media tells us that there are fewer illegal aliens entering the United States, I can say that there are still plenty around in western Pinal County and Maricopa. During our last National Socialist Movement trash collection near Interstate 8 and Freeman Road, we were less than an hour behind three subjects that dropped their blankets, sleeping bag, backpacks and canned pork and hominy soup. If anything, we should at least be charging them with littering before we deport them.

Thora, Bailey and I took a short recon to the area approximately 4 miles west from my location. There's has been lots of recent ATV traffic. We also discovered some homemade straps and a black jug. Near the cattle guard was a 4'x 6' sheet of 1/2" plywood. We picked up the beer cans and grabbed the plywood.

Upon exiting the area, an extra cab Ford PU occupied by three Hispanic male subjects approached. They saw us and the plywood sticking out of the back of my truck. They turned around and made a beeline eastbound towards civilization and disappeared.

WASHINGTON -- Arrests of illegal immigrants along the U.S. border with Mexico are at the lowest level since the Nixon administration, indicating that fewer people are attempting to cross the border to live or work in the United States. The development could change the debate on illegal immigration from securing the border to handling the people who are already here. http://www.azcentral.com/news/articles/2011/12/06/20111206arrests-mexican-border-continue-drop.html#ixzz1fo7E4ZNe

Although arrests may be down, that's not an excuse or invitation to stop or slow down efforts to find, apprehend and deport illegal aliens in this country. They are plenty around and we should not back off one bit.

Illegal aliens that are repeatedly burdening our immigration system should work off some of their expenses while serving time at prison farms. That should slow the flow.

Maricopa County Sheriff’s Office arrested five suspected undocumented immigrants Monday night, including a man who has been deported from the United States 14 times.

According to MCSO, Juan Ramos-Alegria was the driver of the group. MCSO said that just one week ago, he had been deported from Colorado. It was reportedly the 14th time that has happened to him. http://www.abc15.com/dpp/news/region_phoenix_metro/central_phoenix/mcso%3A-man-deported-from-the-united-states-fourteen-times#ixzz1fo8hCxfJ

Sheriff Joe Arpaio said, “I will continue the crackdown on illegal immigration despite the threats and intimidation of my critics and certain politicians. We will enforce all the illegal immigration laws by raiding private businesses, human smuggling and crime suppression operations. This is unconscionable and irresponsible to continue to allow these smugglers to return to the U.S. after being deported." I have to agree with Sheriff Joe. It's most certainly unconscionable and irresponsible. Secure the border and punish offenders.

U.S. Sen. Marco Rubio is pushing for a tough anti-sex trafficking law, but it’s partly being held up due to concerns about abetting illegal immigration.

“Oftentimes, the victims are people who are brought here illegally or are here and their visa expired,” Rubio said. “And they’re terrified about cooperating with prosecutors against their pimps or the organized crime syndicate because they believe they’re going to be deported.” http://miamiherald.typepad.com/nakedpolitics/2011/12/illegal-immigrant-amnesty-concern-helps-tie-up-sex-trafficking-crackdown-by-marco-rubio.html#ixzz1foC3ly3z

There should be absolutely NO Amnesty. NONE! ZERO! The tax paying American citizens are the true victims in these amnesty scams. Despite our objections, we are forced to pay and pay and pay.

AUSTIN, Texas -Mitt Romney and Newt Gingrich have promised to complete a nearly 1,950-mile fence. Michele Bachmann wants a double fence. Ron Paul pledges to secure the nation’s southern border by any means necessary, and Rick Perry says he can secure it without a fence — and do so within a year of taking office as president. http://www.sltrib.com/sltrib/world/53061404-68/border-illegal-immigrants-patrol.html.csp

These slimy creatures called politicians will sell their souls for a vote. They will tell you anything and I mean anything no matter how unrealistic or unbelievable. Compulsive liars, they are. Every last one of them. Yet, the dumbasses known as “Boobas Americanas Ingnoranus” will still put them in office.

“I'm a 9th generation American and patriot (1737). My forefathers served in the Pennsylvania Militia. On June 27, 1781, they were called to perform a tour of duty. I'm still protecting freedom and securing the border, 274 years later.” --Harry L Hughes III
Posted by Harry L. Hughes III at 3:12 PM No comments: