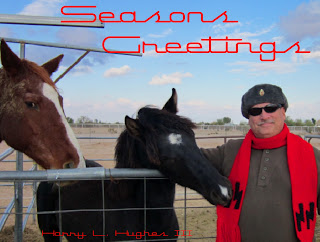 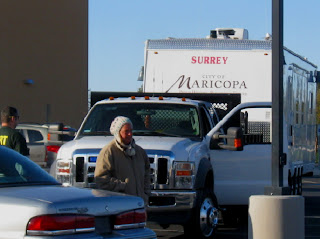 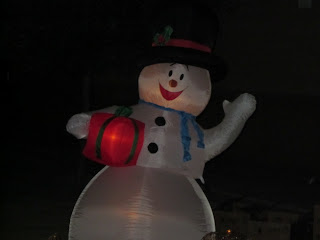 I'm very pleased to announce that this evening's Christmas turkey and gift distribution in Maricopa was executed in an orderly and efficient manner without any unpleasant incidents. I was really surprised to see the Maricopa Police Department instruct people to line up in an orderly fashion. Upon signing up, recipients were issued a numbered tag. This tag would then be exchanged for a turkey and a box of fixings. In the past, people would rush the gates and act like animals. When large groups of people gather, bad things often happen unless there's a police presence.

Myself and a group of friends spent the day and enjoyed a tailgate party including smoked sausages and potato salad. This has become one of my annual traditions.

While enjoying food and friends, the police rolled in the Mobile Command Center. This large piece of equipment was the result of a grant from the Gila River Indian Community. Normally, it sits unused for much of the year. Once in a while, it can be seen at holiday DUI enforcement operations along SR 347.

I spent several minutes speaking with a gentleman that seemed really opposed to this command center being present. He thought it represented the police state and oppression. Many people in Maricopa have lost confidence with the police department due to a few "bad apples". I told him that unruly people and their behavior will normally dictate the level of police involvement. I went on to tell him how things were the previous year. Of course, in a more perfect world, there would be no need for the police. I thought it was good to have that unit out in the field. I'm sure there was some training and experience gained from its' deployment.

To refresh your memories, this is how I saw things last year. It was ugly. There was no other way to describe the events I witnessed.

I was appalled at how some people acted, particularly the ghetto Negroes that were ready to “chimp out” over a $6.00 turkey and a few cans of vegetables. Again, you were judged by the content of your character and I would like to thank the F.O.R. food bank volunteers for their undying commitment to providing food to needy families. I would also like to thank the Maricopa Police and Fire Departments for their ability to contain the crowd consisting of many uncivilized savages. More: http://vandal49588.blogspot.com/2010/12/christmas-turkey-distribution-creates.html

As with any holiday season, we have a few SCROOGE ALERTS. In a more perfect world, the scumbags that do horrible things during the Christmas season, would be swinging by the neck from light standards for all to see.

RIVIERA BEACH, Fla. -- Only in America? A publicist for boxing promoter Don King reports that a truck full of Christmas turkeys intended for distribution this morning was hijacked and found abandoned near Pompano Beach, with the formerly frozen turkeys heading south.

Hundreds of people had lined up at the former Palm Beach Jai Alai stadium for the turkey distribution Friday morning on 45th Street in Riviera Beach, but now they will have to wait until Monday, said King publicist Robert Weneck. http://www.cbs12.com/articles/king-4737406-beach-turkey.html#ixzz1hKRZfwcp

Electrical District #3, without any advance warning has changed their billing cycle in December. Their Christmas gift to us "valued customers" (sarcasm) is TWO electric bills due in December. Ba! Humbug! I spoke with a number of ED #3 customers over the past couple of days and all of them are unhappy about what will ultimately become a financial hardship for many low income families. If a customer cannot pay after 15 days, they get disconnected.

Electrical District No. 3 of Pinal County

Electrical District No. 3 of Pinal County (“ED3” or “District”) is a political subdivision of the State of Arizona formed in 1926 as a Special District by the Pinal County Board of Supervisors. ED3 is a nonprofit utility with a seven (7) member Board of Directors and its purpose is to: a) provide affordable irrigation pumping to agricultural customers and b) to provide power at the lowest possible cost within sound business principles.

ED3 is organized with the authority, rights, and privileges to distribute electrical power and energy to all within its service area pursuant to what is now Chapter 12 of Title 48 of the Arizona Revised Statutes. ED3 is similar to Salt River Project (SRP) serving both rural and urban electric customer needs in western Pinal County. http://www.ed3online.org/

“I'm a 9th generation American and patriot (1737). My forefathers served in the Pennsylvania Militia. On June 27, 1781, they were called to perform a tour of duty. I'm still protecting freedom and securing the border, 274 years later.” --Harry L Hughes III