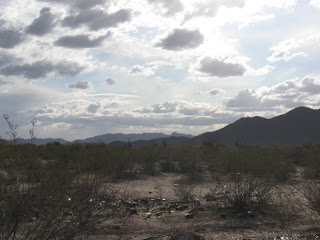 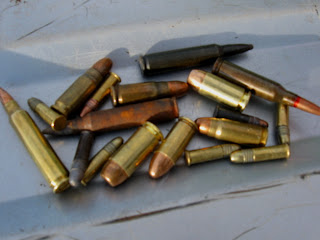 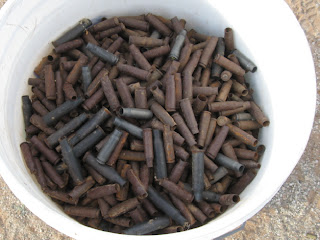 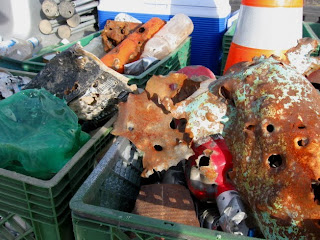 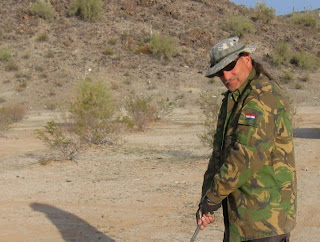 ST Thora Jaeger, K-9 Bailey and myself spent Thursday (o2/16/2012) afternoon monitoring the Vekol Valley Drug corridor and picked up trash left behind by quite a few less than considerate B.L.M. public land users. An unmaintained dirt road passes northward from Interstate 8 through the Vekol Valley to SR 238. It's not all that uncommon for drug and human smugglers to take this out of the way route. It easy to get to Maricopa or Gila Bend via this primative road.

U.S. Customs, with their distinct blue tailed single engine airplane flew over our location a couple of times. Not long after, a military helicopter made a pass overhead. I have observed an increase in air traffic over the area in recent weeks. Hopefully, this will help deter the bad guys.

As usual, members of the National Socialist Movement are the eyes and ears in the "Contested Zone" of western Pinal County. The north end of Vekol Valley attracts more recreational users than the area south of Interstate 8. We found large quantities of trash in need of collecting. There is more waiting for us the next time we return.

We collected an assortment of trash including beer cans, propane cylinders, spent shell casings and plastic bottles. Just about everything we picked up was full of bullet holes. A 5 gallon bucket filled with spent rifle casings will fetch enough at the local scrap yard to buy one day's worth of gasoline. Yes, we filled a 5 gallon bucket and there are many thousands more still out there.

Also recovered, was a quantity of live ammunition. In my 40+ years of shooting, I've never left a loose round behind. I thought that was rather careless of these “slob” target shooters. Some people are either drunk, stupid or both. We spent most of the afternoon picking up after these people. The sun was nearly behind the mountain by the time we returned home.

It doesn't look like much, but this litter is directly convertible into cash. On February 8, 2012, we cashed in 460 pounds of junk that we began collecting during Operation Heimdallr and netted $86.04. Proceeds are put directly back into our operations. The majority is spent on gasoline, batteries, trash bags, food and other supplies required to patrol the desert.

The photo of myself is a bit misleading. I'm, not really golfing, but narco spotters and high flying aircraft might think I am. If you plan on being in one spot for an extended period of time, it's a good idea to look like a recreational visitor.

Other N.S.M. units across the country have conducted similar trash collecting ventures. Some have even adopted stretched of highways. The NSM is dedicated to cleaning up America.

Hardly a day goes by in Maricopa when there isn’t at least one call to the Maricopa Police Department about the theft of an air conditioning unit or the copper from inside the unit.

In early December, four calls were placed on the same day to MPD for ACs stolen or damaged in The Villages subdivision. http://www.inmaricopa.com/Article/2012/02/16/ac-thefts-stolen-copper

My post in the comment section: "Yesterday, I came across piles of insulation that was stripped from copper wire along Hidden Valley Rd. south of Century. Recycle Today on Edwards Ave. buys stuff w/o ID. Last Nov., I observed two persons selling railroad spikes. They weren't UP RR employees and the MPD wasn't too interested in my report despite my photos.

Imagine the Amtrak Sunset Ltd. rolling off the tracks and causing fatalities because the spikes were pulled up. We do have a serious and dangerous problem with metal thieves."

Rather than be a thief, there are plenty of opportunities to raise extra money picking up and recycling trash in the desert. A stolen AC unit fetches about the same amount of money as one of our trash collection operations.

Of course, “thug nuts” would rather steal. Doing things of a positive nature are not in their internal programming. They are all about destruction and evil.

“I'm a 9th generation American and patriot (1737). My forefathers served in the Pennsylvania Militia. On June 27, 1781, they were called to perform a tour of duty. I'm still protecting freedom and securing the border, 274 years later.” --Harry L Hughes III
Posted by Harry L. Hughes III at 6:19 AM No comments: