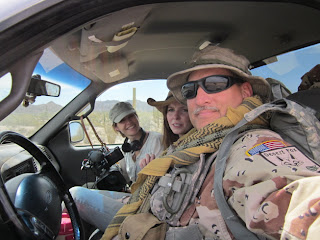 On Saturday, June 2, 2012, the Pinal County Sheriff's office discovered a burned out vehicle containing the charred bodies of five murder victims near Interstate 8, south of mile marker 151. It's not all that uncommon for drug cartels to reward failure in some gruesome fashion. Incineration, decapitation and dismemberment are frequently employed methods. Oddly, this story has taken an abrupt turn. More

In recent weeks, multiple dope loads worth millions of dollars were seized by various law enforcement agencies in and around the Vekol Valley. Stepped up law enforcement and citizen patrols are putting a dent in cartel activity. The pressure is on! 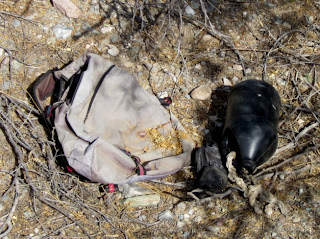 The Vekol Valley is often considered to be some of the most dangerous "real estate" between Phoenix and Mexico. Mexican criminals killing Mexican criminals is not an uncommon occurrence and the body count has been steadily rising since 2009. I have lost count. The drug related violence that is so common in Mexico, does in fact, cross the border into the United States. I'm sure those incidents will increase as long as our government continues to look the other way, while lying about how secure our border is.

Shortly before noon, Our expedition commenced from my home following a short safety briefing and a detailed description and explanation of the various equipment I was bringing into the field. I brought an assortment of tactical gear, binoculars, first aid supplies, water, radios, body armor, ammunition, an M-4 carbine (5.56mm) and a 9mm handgun.

Before making our way to our destination, we took a short tour of one of the nine drug houses that was raided in and around my neighborhood last fall during Operation Pipeline Express. Unlike the Hollywood/Miami Vice glamorized drug dealers, these homes were not palaces with $300,000 dollar cars in the driveways. They were run down mobile homes with blankets covering broken windows. In the illegal drug business, the lucky ones end up in prison. Those that are not so lucky, end up dead. 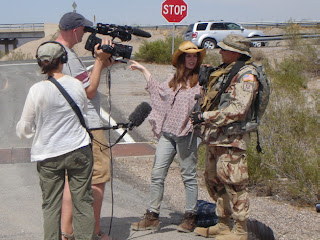 Once we reached the Vekol Valley, we dismounted our vehicles and walked to the drainage tunnels under Interstate 8 that have for years served as pick up points for drugs and illegal aliens. Within seconds, we discovered an assortment of black gallon jugs, burlap bags, clothing and other items discarded by illegal aliens. I explained that drug and human smuggling are industries of exploitation.

Mexicans are conned into paying large sums of money for "a better life". If they survive the desert, they are frequently held for ransom at a "drop house" in the Phoenix area. Once they finally leave the drop house, they are sold to people wanting to use them as cheap labor. It's not uncommon for these laborers to fork over a percentage of their earning to some gangster or thug. They are essentially put into a situation that would be considered voluntary servitude. 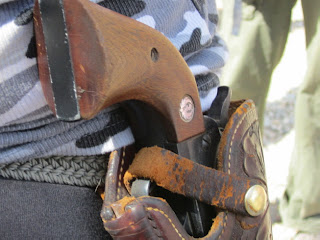 Some local residents that support NSM activities in the desert came along to assist. People in the Hidden Valley area were tired of illegal aliens trespassing on their properties, scaring people in the middle of the night, stealing chickens, throwing rocks at family pets, breaking into homes and robbing people of their hard earned possessions, not to mention, their piece of mind. Our communities, particularly in western Pinal County, are under siege by these hoards of criminal invaders.

One local resident went on to say that she lived south of SR 84 near Interstate 8. Things got so bad that she was forced to move out and leave her property vacant. Illegal aliens used to approach her home, knock on the door and attempt to trade cocaine for water. It wasn't long before groups of as many as 60 illegal aliens would be found inside her dwelling. Due to this continued flood of illegal aliens, she was forced to have her home demolished. Today, the property remains vacant and unable to be sold. 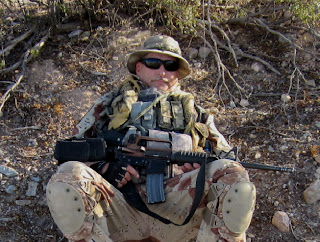 The production of the documentary continued well into the afternoon, until the sun had set. I reinforced the point that illegal immigration and the proliferation of illegal drugs is destroying our race, nation and culture. Our country is being turned into a Third World slum as a result of illegal immigration. Securing our borders is essential to our sovereignty and the preservation of our American our way of life.

Chris, Wendi, Stacey and the rest of the BBC staff were most kind and polite. I would certainly enjoy working with them again. Upon checking my in box this morning, I found a kind email from their producer, Chris Alcock. He wrote, "Hey Harry, thank you for all your help yesterday... You were brilliant and a real trooper. Sorry it took so long... Wendi and Stacey say thank you."

“I'm a 9th generation American and patriot (1737). My forefathers served in the Pennsylvania Militia. On June 27, 1781, they were called to perform a tour of duty. I'm still protecting freedom and securing the border, 275 years later.” --Harry L Hughes III
Posted by Harry L. Hughes III at 6:02 AM 1 comment: