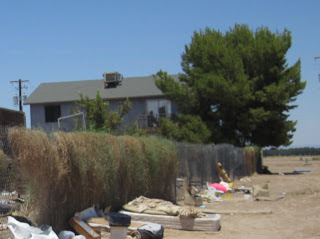 Once again, and without fear, illegal aliens are using the dirt lot behind the Farmers Convenience Store at 49301 W. Papago Road, Maricopa, AZ as their "nesting" ground. What the photos cannot do is re-create the foul stench of urine and feces that permeates throughout the entire area. Not only do they live here, they also use the lot behind the store as a toilet.

A business that sells food, has a restaurant and is open to the public should not be permitted to operate under these appalling conditions. Local residents should not be forced to tolerate the conditions these people create, either. Some animals have better sanitary practices than some of these supposed “humans”. Cats bury their turds. 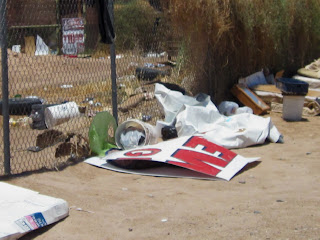 During the evening hours, store customers can frequently observe drunken subjects (primarily Mexican males), with open alcoholic beverage containers in hand, loitering in front of, behind and along side the store. Several women have told me that they no longer feel safe going to the store, alone.

Open Containers and public intoxication are illegal, but law enforcement appears to not care one bit. After all, if the law were actually enforced, those that are arrested and charged would pull the “race card” and scream “racial profiling”. Prostitution, marijuana and cocaine are illegal, too, but appear to get a “free pass” at the Farmers Convenience Store. 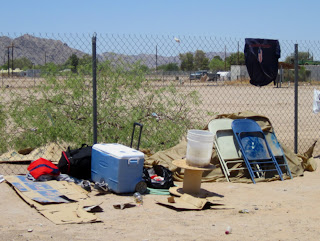 The owners of the store simply look the other way and actually help facilitate this ever worsening problem. After all, money always trumps the safety and well being of the adjacent residential community and its' decent inhabitants. Citizens simply don't matter, anymore. We see that attitude play out on a daily basis on local, state and federal levels.

To further assist in the decay and willful destruction of my rural neighborhood, the Farmers Convenience Store sells drug paraphernalia, spice and other offensive products that promote unlawful and degenerate behavior. I have seen these items on their shelves.

Last month, a documentary crew from the BBC traveled half way around the world to see what illegal immigration has done to western Pinal County. I showed them many unsightly, ugly, disgusting and unpleasant things. Awithout a doubt, a vile plague has descended upon my neighborhood.

I am more than pleased to announce that another globally and extremely well known cable/satellite media network is planning on visiting me next month to create a documentary, too. The Farmers Convenience Store is the first thing I'm going to show them. Then, I'm going to lead them due south and show the film crew where all of this filth is coming from. 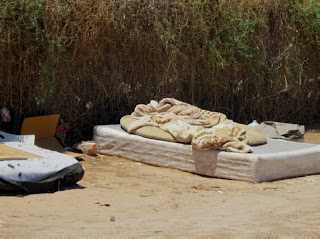 The second thing I intend to do is introduce them to a woman who was basically run off her property by large groups of illegal aliens. They stole her chickens, threw rocks at her pets and broke into her home, rendering it uninhabitable. Illegal immigration and the lack of enforcement, forced this disabled woman out of her home and off her property.

Until now, she had no voice. It's more than a little shameful that the U.S. Government has turned its' backs on law abiding and even vulnerable U.S. Citizens. To further spit in the eyes of decent people, the government goes to great lengths to pander to foreign nationals, who have no business being here.

Remember, the “parasite” ALWAYS kills the host, before moving on to another host. That's exactly what's happening to the United States and its' people. Arizona, like the rest of our country, is dying a slow painful death. The instrument of death is Multiculturalism. 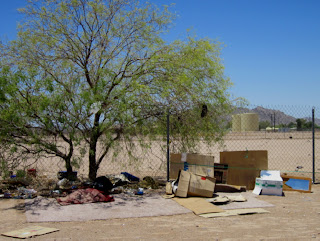 Hopefully, once the truth about western Pinal County gets out and becomes common knowledge, people will no longer want to come here, build here, live here, create jobs here and spend money here. In fact, those that are already here, may decide to leave. Teens and young adults that are growing up here, want nothing more than to get the hell out of here. Go ahead, ask them.

Agents near Sells, located on the Native American reservation Tohono O'odham Nation, rescued a pregnant, dehydrated Guatemalan woman on Saturday who they found sitting beside the corpse of her husband.

"The couple had crossed the border two days earlier and had been abandoned by their smuggler when the husband collapsed," the Border Patrol's Tucson sector said in a statement. Full Story

There you have it. Pay the smuggler and die in the desert. If our border were secure, this wouldn't be happening on an almost daily basis. How many of you out there think the smuggler gave the woman who's husband died a full refund or even an apology? This is what is coming into our country. Human traffickers that exploit and prey upon their own people. I'd call them scum, but I'd be offending scum.

“I'm a 9th generation American and patriot (1737). My forefathers served in the Pennsylvania Militia. On June 27, 1781, they were called to perform a tour of duty. I'm still protecting freedom and securing the border, 275 years later.” --Harry L Hughes III
Posted by Harry L. Hughes III at 10:32 AM 3 comments: