A little "urban safari" in downtown Phoenix, combined with running a few errands and standing up for the Second Amendment 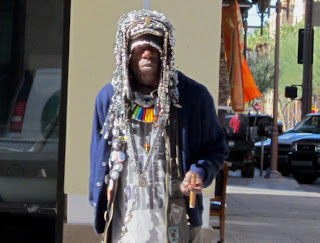 On Friday, February 8, 2013, I made one of my rare expeditions to the City of Phoenix. After attending a pro-Second Amendment rally at the capitol, I paid the B.L.M. office a visit to acquire a permit for the Barry M. Goldwater Air Force Range. While making my way down Washington Street, I noticed somebody was still sitting on the corner with a sign protesting Sheriff Joe Arpaio. So little changes, here. When all of my errands were complete, I opted for a little "urban safari" along Fillmore Street. I discovered that some small village in Africa is missing its' king.

"To stand up for my second amendment rights. They have no right to take away our freedom and our guns," said Lynette Huston, of Black Canyon City. "They need to check into the mental health system, not law-abiding citizens, we're not the ones breaking the law." Full Story 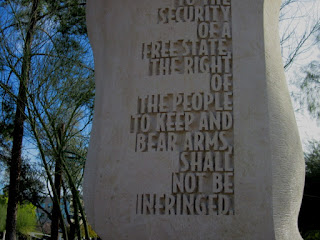 Lost in the discussion of unlawful confiscation is: Don't fight Caesars army, avoid them and fight Caesar, himself. Don't deal with armed government agents, go after the legislators, and the bankers who buy them. Cut off the paychecks and the armed goons will simply go home. A lesson can be learned from Christopher Dorner, the rogue L.A. cop, who killed the daughter of a superior and alleged corrupt officer. When Caesar goes corrupt, Caesars children are fair game.

“TV news stations in LA are warning people not to drive pick up trucks in LA and to obey all traffic laws or risk being shot by police who are ‘all stressed out and tense,’ as a result of a cop killer on the loose. The killer is ex-cop Christopher Jordan Dorner, he is a 6 foot black man weighing 270 pounds. As a result of the manhunt, Southern California cops have shot two Asian women, delivering newspapers, who happened to be driving a vehicle similar to the one Doner is believed to be driving.” Full Story 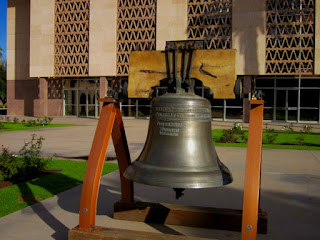 Perhaps, they wronged him and he has good reason to be angry. If he could have exposed police corruption, without killing innocent people, he would be respectable. It is sad that the only way he felt that could make a point was by doing what he did. I think this guy has something on the department or "higher ups."

It would appear that police officers are taking some really big risks shooting at random vehicles with no visual identification. This looks like a blotched assassination attempt. Christopher Jordan Dorner is marked for death. Surrender is not a option.

From 2/05 to 1/09 I saw some of the most vile things humans can inflict on others as a police officer in Los Angeles. Unfortunately, it wasn't in the streets of LA. It was in the confounds of LAPD police stations and shops (cruisers). The enemy combatants in LA are not the citizens and suspects, it's the police officers. Full Article 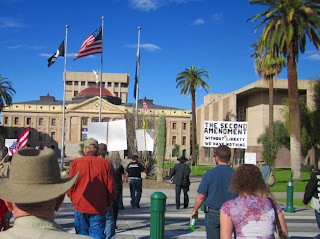 Residents have been advised to avoid pickup trucks that resemble the one Dorner is driving. This means the police are not attempting to capture, but kill, this suspect. They don't want a hearing, nor trial. They are making themselves judge, jury and executioner, while harming the very people they are supposed to be protecting. We can expect more of the same when the "drone program" is finally up and running. The death squads are out.

In California, a rogue ex-cop continues on a killing spree, while police open fire on innocent and helpless citizens. Their gun control advocate Senator and war profiteer will likely stick to her tyrannical words. . . 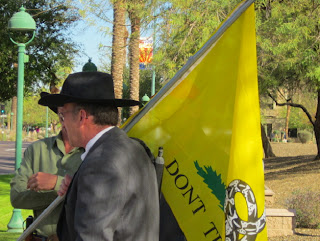 “Banning guns addresses a fundamental right of all Americans to feel safe.” “If I could have gotten 51 votes in the Senate of the United States for an outright ban, picking up every one of them; ‘Mr. and Mrs. America, turn 'em all in,’ I would have done it.” “The National Guard fulfills the militia mentioned in the Second amendment. Citizens no longer need to protect the states or themselves.” Sen. Diane Feinstein

There will be a 2nd Amendment Rally at the Arizona State Capital, in Phoenix, on Feb 16, 2013 at approx Noon MST! The purpose of this gathering is to let the powers that be know without a doubt, that the citizens of Arizona will NOT ALLOW any further curtailment of our Constitutional Rights, and in particular, the 2nd Amendment! We intend to show them this is NOT open for debate! More

In response to these unconstitutional actions by the President, on .223, February 23, 2013 the American people will stand together in defiance to protect the right that protects ALL of our rights, the 2nd Amendment! They will organize locally so that they may band together neighbor to neighbor and reassert their community's right to determine their own destiny! More

"And here one must note that hatred is acquired as much by good deeds as by evil ones..." --Niccolò Machiavelli
Posted by Harry L. Hughes III at 12:09 PM No comments: