Dust storms, followed by nighttime April showers amidst my preparations for the National Socialist Movement's meeting and rally in Atlanta, Georgia 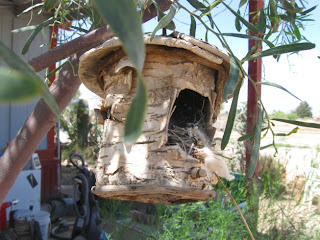 Mother nature is showing it's fist, here in southern Arizona. April is normally sunny and mild with temperatures in the upper 80's and low 90's. On Monday, we woke up to cooler temperatures, strong winds and blowing dust. In my neck of the woods, winds averaged 27 mph, with much stronger gusts.

By 8:00 pm Monday night, the dust turned into rain and for a couple of hours, we were refreshed with the much needed precipitation. We managed a total 0f 0.18" of rain. Not much, but we'll take it. By Tuesday morning, the wind resumed. 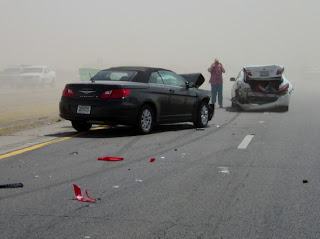 I was a bit concerned with the new hatch-lings in the small bird house hanging from the tree just outside my front door. I checked up on them this morning and they were fine. The wind is still shaking up the occupants, but they're (literally) hanging in there.

CBS 5 Meteorologist Katie Baker said winds gusts reached 37 mph in Chandler in the southeast Valley and Goodyear to the west Tuesday morning and sustained winds from the west between 15 and 25 mph were expected to last the rest of the day. Baker said gusts as high as 40 mph could be expected in some parts of the Valley. Full Article Wind Speed

The National Weather Service has issued high wind and blowing dust advisories for Monday. Interstate 10 (between Casa Grande and Phoenix, and between Tucson and the New Mexico state line) may be affected by high winds and blowing dust. Strong winds, with gusts up to 60 mph, are also expected along Interstate 8 in southern Arizona and Interstate 40 in the northern part of the state. Full Article 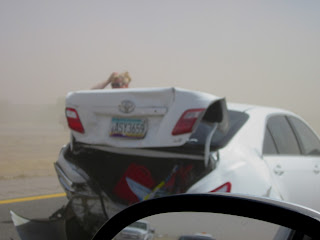 The wind is blowing and the dust is flying. Mayhem is creating chaos. If you can't see the road in front of you, what do you do? I happened to have been driving in this weather and the other motorists I was sharing the road with did exactly what I thought they would do. Rather than exercise caution and slow down, they continued to drive 70 mph, despite not being able to see the road in front of them.

I had to run a few errands in Phoenix and knew all to well that I would encounter people exercising little to no common sense. The stretch of SR 347 between Interstate 10 and the City of Maricopa becomes a dust bowl whenever the wind blows. This stretch of highway also becomes a junkyard, littered with the wreckage of people's cars.

Avoid driving into or through a dust storm. If you encounter a dust storm, immediately check traffic around your vehicle (front, back and to the side) and begin slowing down. More 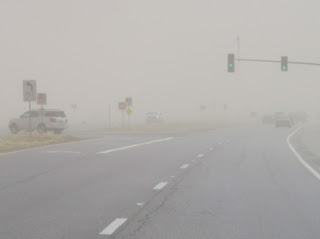 I'm looking forward to my cross country road trip coming up next week. The National Socialist Movement is holding it's annual meeting, along with a rally at the state capitol on April 19-20, 2013. Half the fun is getting there. I will be passing through and visiting various civil rights attractions such as Foster's Hall at the University of Alabama in Tuscaloosa, Alabama and the Sixteenth Street Baptist Church in Birmingham.

Oddly, we'll be following in the foot steps of the iconic "Freedom Riders" and other civil rights activists of the 1960's. This time, the marginalized and silenced White People will be making this journey to freedom and the pursuit of the ever distant and crumbling American dream.

Most of you should be aware by now that the NSM National Meeting will be held in the Atlanta Georgia area on April 19th, with the Rally at the State Capitol on April 20th, at 2:30 pm. Link Video Announcement 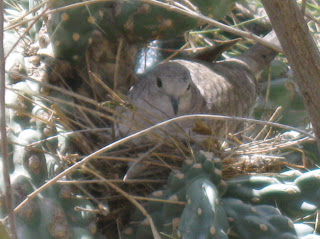 Racism is when you don't give black people special privileges. Racism is when the white race fights against their own oppression and genocide. Racism means to promote and protect the life of one's own race. Why is that a bad thing? White People are the smallest ethnic minority on the planet and somehow, it has become wrong to defend it.

According to the Department of Justice 32,443 white women were raped by black men in the United States during 2006. Whereas not a single black woman was raped by a white man, during that same time period. PDF Link (Table 42) In this day and age, a racist seems to simply mean someone who takes race into account in some way that is not approved by the mainstream and existing power structure.

Tolerance and apathy are the last virtues of a dying society.” --Aristotle, Greek philosopher (384 BC – 322 BC)
Posted by Harry L. Hughes III at 2:52 PM No comments: