Weekend OP: I decided to ignore the weather advisories and set up camp in and around the Vekol Valley 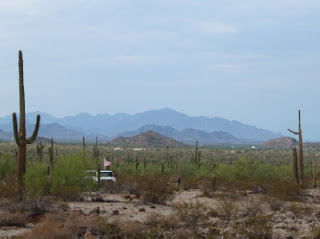 According to the weatherman, we were to have an increasing chance of rain, as we head towards the weekend (Aug. 24-25), due to a tropical cyclone, south of Baja California. Since the media spent several days hyping the weather, I decided to ignore the reports and spend the weekend in the desert. On Saturday afternoon, I established an observation post along Freeman Road, near Interstate 8 mm 140.

Not long after setting up camp, a gentleman pulled up in a blue car with California plates. He identified himself as a "storm chaser" and hung around our post for a couple of hours. Unfortunately, he was not finding the storms he was looking for. I suggested he move further south, because the storms were dissipating before they reached us.

He was not familiar with the drug and human smuggling problems in this area. I informed him that that sign he past on the way in was for real. He asked me for some contact information. Perhaps, he will return. 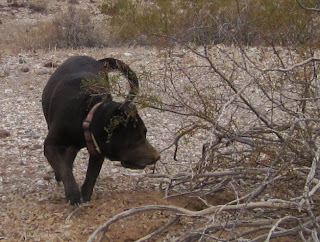 I hiked the surrounding area and looked for recent signs of drug and human smuggling. The other people in my party took their Jeep and scoured a vegetated area to the south, along B.L.M. route #8009. They flushed out a deer and found a stash of canned food, left behind by smugglers.

The brands were identical to groceries recovered earlier in the year, along the power line in Hidden Valley. Perhaps, the same smuggling crew was working and resupplying this area, too.

We didn't get any of this: The National Weather Service is predicting periods of heavy rain with flooding possible, along with gusty winds, thunderstorms and the possibility of related dust storms, according to a Pinal County press release. Link

The weather advisories were all for nothing. We ended up with just 0.01" of rain. It actually rained for more than half the day on Sunday, but the ground never got wet. The high was only 87.4 degrees. It's very rare to be that cool in August. As anticipated, the camping and outdoors went well. I didn't even set up my tent. The bugs weren't bad and the tarantulas didn't bother me. 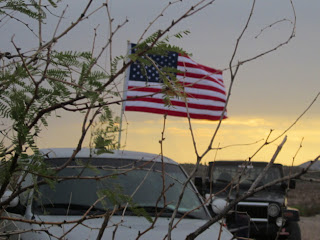 Before sunrise on Sunday morning, I broke camp and met up with another associate and drove to the B.L.M. gate at mm 154. We established an observation post on B.L.M. route 8023A, just south of the power line, near Indian Butte. I worked a perimeter around the camp, while my associate hiked a 16 mile loop south of Indian Butte and into the Table Top Wilderness Area.

Neither of us found any recent sign. We did come across backpacks, clothing and a pair of binoculars. Unfortunately, none of these items were suitable for re-purposing.

Prior to departing our camps, we “policed” the areas and picked up trash left behind by others. As usual, we left the desert in better condition than it was, when we found it. Most of the trash we collect is recycled. 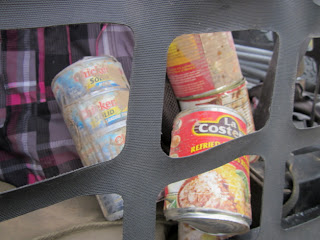 One of the questions I always ask the illegal aliens I come across is, "Why come here in the summer? Nobody has ever given me an answer. Again, the guy they handed to money to in exchange for bringing them across the border probably told them that it was only a two hour walk to Phoenix... and they believed him.

Among some circles, including militia groups and border watch organizations, people talk of "R.O.E." (rules of engagement). I need to caution everyone that we DO NOT "engage" people. It is our sole mission to "observe and report" possible unlawful activities.

Remember, we are NOT "vigilantes", nor do we take the law into our own hands. Any deviation from that could very likely result in prison time and enormous legal fees.

When we do encounter people, it is only to collect information and offer humanitarian aide. We do not detain people. We don't have the right to do so. If somebody feeds you some line about making a "citizen's arrest", run, don't walk away from that person. 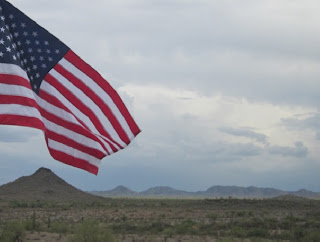 You are being fed a bunch of bullshit. It goes without saying that it's important to maintain a positive relationship with the various law enforcement agencies that have jurisdiction in the areas we patrol.

Rep Gutiérrez: Women Will Get Raped Unless We Pass Immigration Reform

Gutiérrez is so over the top, lying, justifying why illegals should be given amnesty. Hey Luis all of this fear mongering you are doing wouldn’t exist in the US if our laws were enforced! The women wouldn’t be raped, the kids wouldn’t be starving or missing a parent, people wouldn’t be dying in the desert or losing a finger etc if the laws on the books were enforced. It’s you and Congresses fault, because you do not enforce the laws on the books. Full Article

"It is absurd to say that our country can issue $30,000,000 in bonds and not $30,000,000 in currency. Both are promises to pay; but one promise fattens the usurer, and the other helps the people. If the currency issued by the Government were no good, then the bonds issued would be no good either." --Thomas A. Edison
Posted by Harry L. Hughes III at 12:43 PM No comments: